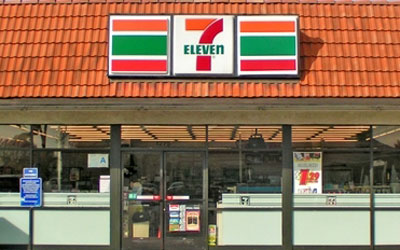 Enter at your own risk.

Schenectady, New York -- In what occult experts are calling the first known instance of a vampire employed in an actual human occupation -- a genuine vampire is working the night shift of a 7-Eleven convenience store! The vampire clerk, Milosh Coudray, is nearly four thousand years old, and over the centuries has gone by the names Orlando du Keat, Sultan of the Underworld, Gawain of Wraiths, and Drakul Bruxa Callicantzaros.

The two obvious questions that come immediately to mind are: 1) Why would a vampire want to work at a regular job in a 7-Eleven store?, and 2) Why would 7-Eleven hire a vampire to work in one of its stores? As to the first question, Coudray explains:

I've always been different from most vampires. Even from an early age, I was what you might call the white bat of my family. Sleeping in coffins and tombs never appealed to me. I like creature comforts -- a cozy apartment, nice things to wear, state-of-the-art audio and video equipment. These things cost money, so I've always held jobs -- at night only, of course.

The jobs must be at night, because vampires cannot stand the light of day, which severely weakens them to the point of sometimes having no power at all. Therefore, the jobs Coudray has held include "nightclub bouncer, all-night news stand operator, 24-hour gas station attendant, and security guard at a blood bank, which obviously was my favorite job until I was fired for doing too much sampling of the product."

Coudray sees the 7-Eleven job as ideal for him:

Not only is it at night, but I get a constant, fresh supply of vic--er, customers coming in to the store. They bring their purchases up to the counter, stand very close to me, and while they are asking me their inane questions about vampires, I take that opportunity to lock in to their inquisitive, trusting, eyes and mesmerize them with my, let's just call it -- extremely personal service.

First off, I appreciated his honesty. He never tried to hide the fact that he's a vampire. Initially, I was repulsed. Then, I thought -- hey, competition is tough in the retail world; anything you can do to stand out and make yourself special, offer something new, is going to bring the customers in. And if you have a choice of going to some boring, generic mom and pop store for your groceries, or checking out the cool vampire working at 7-Eleven, where would you go?

Since Coudray started working at the 7-Eleven, and management posted a huge "Vampire On Duty" sign in the front window, the store has been packed, often with lines around the block. The only downside seems to be, according to police detective Edward Newell, "a couple dozen of the customers never made it back home -- and many of those who did had substantially paler complexions, reddish eyes, and have been occasionally spotted devouring live cattle." Newell has launched a thorough investigation.