CARACAS, March 17 (Reuters) - Venezuela's acting president urged U.S. President Barack Obama to stop what he called a plot by the Pentagon and the Central Intelligence Agency to kill his opposition rival and trigger a coup ahead of an April 14 election.

Nicolas Maduro said the plan was to blame his opponent's murder on the OPEC nation's government and to "fill Venezuelans with hate" as they prepare to vote following the death of socialist leader Hugo Chavez.

The United States denied the claim. "We categorically reject allegations of U.S. government involvement in any plot to harm anyone in Venezuela," State Department spokesman Patrick Ventrell said.

Maduro, a 50-year-old former bus driver and union leader, first mentioned a plot against his rival, Henrique Capriles, last week. He blamed it on former Bush administration officials Roger Noriega and Otto Reich. Both rejected the allegations as untrue, outrageous and defamatory.

"I call on President Obama - Roger Noriega, Otto Reich, officials at the Pentagon and at the CIA are behind a plan to assassinate the right-wing presidential candidate to create chaos," Maduro said in a TV interview broadcast on Sunday.

Maduro, who is Chavez's preferred successor as president, said the purpose of the plot was to set off a coup and that his information came from "a very good source."

The acting president hopes to win next month's vote partly by riding a wave of grief from supporters over the death of the charismatic but divisive Chavez, who died on March 5 aged 58 after a two-year battle with cancer.

During his 14 years in power, the former soldier often denounced U.S. plots against him and his "revolution." Critics dismissed those claims as a smokescreen to keep voters focused on a sense of "imperialist" threat.

Capriles, who kicked off the opposition's campaign with big rallies in the provinces over the weekend, said Maduro would be to blame if anything happened to him.

The election campaign has had a particularly acrimonious start, with both sides accusing each other of dirty tricks and both candidates landing very personalized blows.

Capriles, a 40-year-old centrist state governor who cites Brazil as his economic model for Venezuela, accuses Maduro of being a poor imitation of Chavez and of using his boss's death as a mawkish campaign tool ahead of the vote.

"Nicolas, I know you're watching me ... Listen, I'm going to destroy you with votes. Here are the people!" he told a crowd in the western city of Merida. "You don't have any people, kid, because they were followers of the president."

Capriles has conceded he faces an uphill battle, given the emotion around Chavez's death and the boost that his personal blessing gave Maduro. Two recent opinion polls gave the acting president a lead of more than 10 percentage points. Both were conducted before Chavez's death.

Maduro has sought to emulate the common touch that helped the late president forge a deep emotional bond with many voters, but has struggled - beyond copying Chavez's bombastic rhetoric against foes at home and abroad.

In the interview, recorded at the military museum where Chavez's body was carried in a funeral procession on Friday after 10 days of mourning, Maduro said he had cried more when Chavez died than when his own parents passed away.

As the interview ended, he shed a few more tears.

Also on Sunday, in another move that was reminiscent of the late president, he sent his first messages from his new official Twitter account, @NicolasMaduro.

"Here I am fulfilling the call of the Supreme Commander, assuming his commitment, which we will all complete together. Together we are all Chavez!"

In the latest of many tributes to Chavez, state TV played highlights on Sunday of his quirky, hours-long "Alo Presidente" ("Hello President") show, in which he used to meet voters, tell anecdotes, croon folk songs and bait his critics.

Maduro has said that if he wins the election he will revive the format, under the name "Bolivarian Dialogue."

At stake in the election is not only the future of Chavez's leftist revolution but also the continuation of Venezuelan oil subsidies and other aid crucial to the economies of leftist allies around Latin America, from Cuba to Bolivia. 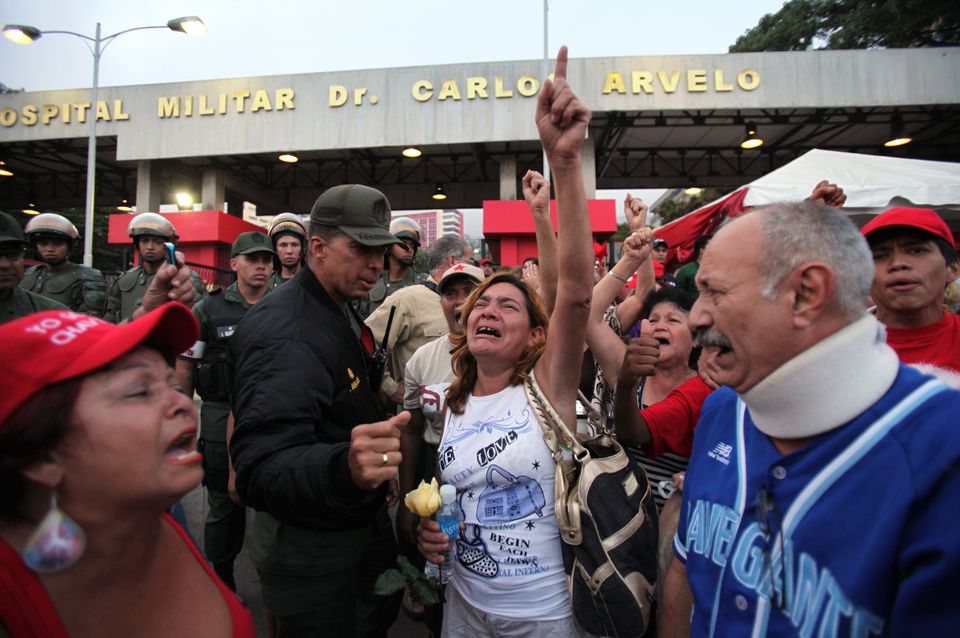 1 / 14
Supporters of Venezuela's President Hugo Chavez react to the news that that Chavez has died, as they gather outside the military hospital where Chavez was being treated in Caracas, Venezuela, Tuesday, March 5, 2013. Venezuela's Vice President Nicolas Maduro announced that Chavez died on Tuesday at age 58 after a nearly two-year bout with cancer. During more than 14 years in office, Chavez routinely challenged the status quo at home and internationally. He polarized Venezuelans with his confrontational and domineering style, yet was also a masterful communicator and strategist who tapped into Venezuelan nationalism to win broad support, particularly among the poor. (AP Photo/Fernando Llano)
AP