Every evening for the past six months an extra-terrestrial visitor has graced the western skies. There is something UFO-like about it.

As the Sun dips below the western horizon and twilight descends a deeper shade of blue, one star bursts into view before any other. You may catch it as you're commuting home or walking into the house. At first it looks like a plane but it doesn't move like a plane. It just glistens and when you stare at it long enough you will wonder, "Wow, what is that thing?" Then you walk inside and think about other things.

People especially notice it when in close proximity to the Moon -- this occurs about two days each month. Inevitably these conjunctions incite calls to the Cincinnati Observatory that begin, "I saw this weird bright light in the sky..."

"Venus," I answer, sometimes cutting them off. "It was the planet Venus."

Venus season began on June 10. As the Sun set, a slim crescent moon sat low above the western horizon next to Venus. That's when the first calls came in. 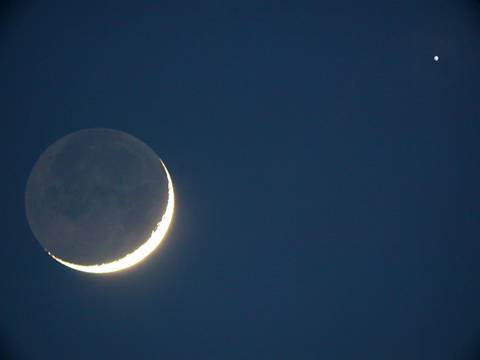 As the Moon moved away night after night Venus remained, bright as ever. But she didn't attract as much attention and so the calls slowed. The next flood of reports came on July 10 and 11 when the Moon was again in Venus' neighborhood. This pattern repeated itself through each Moon-Venus close encounter: August 9-10, September 8-9, October 7-8, November 5-6. The planet was there each and every night blazing away but it took the Moon to highlight her.

A typical call into my office at the Cincinnati Observatory goes like this:

Uh, hello. I'm not sure who I need to talk to about this, or even if I can explain it. But I saw a really bright light in the sky last night next to the Moon. It flickered a little but was really, really bright. As I watched, it moved. I thought maybe I should report it to you since it was so strange.

When I tell them that it was Venus, I get a wide variety of reactions. Most are relieved to know they weren't hallucinating. Others are delighted to learn that they discovered a planet. Some are skeptical and even say, "No it couldn't have been Venus. It was too weird, plus it went behind the neighbor's house."

This is what makes astronomy great. People find a unique comfort, pleasure, and fulfillment in watching the sky. Venus has a distinctive color, shimmer, and luster unlike any celestial object. I love seeing her in the sky each night.

Our astronomical knowledge only enhances the beauty of Venus. We know that she's a planet just a smidgen smaller than our own, that her temperature is about 900 degrees F on almost her entire surface, that this extreme heat is caused by her oppressively thick atmosphere, that this atmosphere causes it to rain sulfuric acid. This knowledge excites my imagination.

Even knowing that the distance to Venus is an incredible human achievement. That bright beautiful light is a planet 40 million miles away and I am looking at it, the Earth is looking at it, and people since the beginning of time have marveled at it. How cool is that!

We have one more Moon-Venus conjunction on December 5 and then Venus will slowly ride off into the sunset. You don't need to observe just on December 5. Look for her every night as dusk falls from now until the end of the year. Venus' time as the "Evening Star" will end in with 2013 but by the end of January 2014 she will pop out again in the morning sky as bright as ever. And before dawn on January 28 the Moon will be right next to her as the "Morning Star" -- and I will be waiting to happily take your calls.

Dean Regas is the Outreach Astronomer at the Cincinnati Observatory and co-host of the bite-sized astronomy program Star Gazers which air on over 100 TV stations nationwide.