Was van Gogh colorblind? At first blush, the question seems absurd. But a new tool developed by Kazunori Asad, a Japanese vision expert, breathes fresh life into the seemingly-preposterous theory.

Asad says he first noticed certain characteristics of van Gogh's work could indicate colorblindness while giving a speech in Hokkaido, Japan, on color deficiencies. An exhibit there cast the artist's masterpieces in various lights, attempting to replicate how they'd be perceived by people with one or more defective sets of cones, a structure in the eye used to view color.

As he examined the works, he was startled to find the "normal" and the "colorblind" versions weren't all that different. And in some cases, Asad says, the colorblind reproduction was actually better.

Asad explains on his blog, "In the van Gogh images seen in the color vision experience room, to me the incongruity of color and roughness of line had quietly disappeared. And each picture had changed into one of brilliance with very delicate lines and shades. This was truly wonderful experience."

He then ran many of van Gogh's celebrated works through the colorblindness filter, and while he cautions the simulation isn't exact, it is "a useful starting approximation."

The Daily Mail notes that van Gogh tended to favor the use of yellows, greens, and blues -- colors easily perceived without a red cone. Another possible explanation for the artist's color palette and unique style, including the colored halos he added around lights, could be a form of glaucoma.

PHOTOS of Vincent van Gogh's work as a colorblind person may see them: 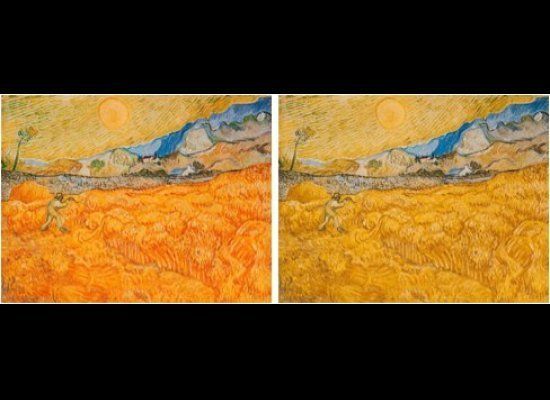