Writing about getting older, especially when you've hit 60 or thereabouts, has become quite an industry. You could blanket Yasgur's Farm with books about 60 being the new 40; 60 being the new 60, or 60 simply being 60.

There are silly ones, serious ones, worrisome ones, fascinating ones, funny ones. Sometimes I think we should have another cultural revolution like we did in the '60s. Instead of burning draft cards and bras, we should burn these books. You can even toss mine into the fire if you want.

Although there is one I happily devoured recently that pretty much summed it up for me. You should flip through it before making any rash decisions about setting it aflame: 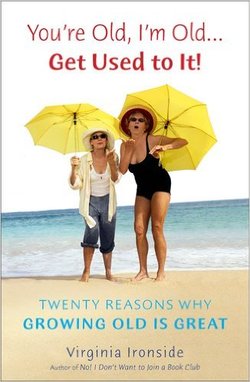 You're Old, I'm Old... Get Used to It! Twenty Reasons Why Growing Old Is Great
by Virginia Ironside

British writer Virginia Ironside is determined to convince people that getting old is not so bad -- even for a Baby Boomer who interviewed the Rolling Stones and Jimi Hendrix early in her career.

Among scores of other concerns, Ms. Ironside nails digestion and death. She gives only lip service to one of my favorite subjects -- drooling. But I've covered that topic in its entirety.

Virginia's take on being a modern-day grandparent is the best I've read. There's an abridged version on the web somewhere, but I'm not linking to it because you really should savor the whole chapter.

Although, I will let you watch this -- culled from her one-woman show The Virginia Monologues:

I'd deem it an honor to spend "a couple of minutes" with Ms. VI.

So grab the book, step away from the bonfire, just far enough so you'll have enough light to read, laugh out loud probably -- and when you're done save this one from the flames.