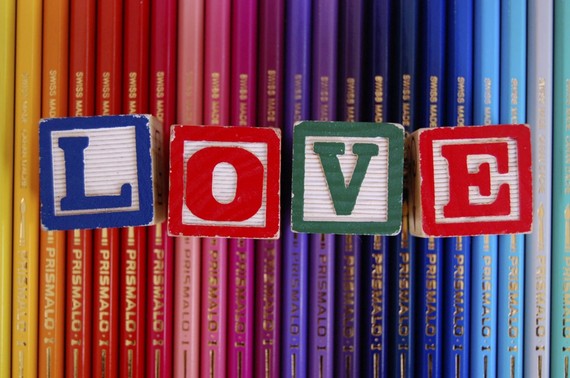 Can you ever understand mass murder? Can you ever do anything but fumble for blame or construct a quick shorthand that substitutes for meaning?

And yet we have to because we need meaning. We need things to make sense. No one will really ever understand the motive, but the reports say the lone shooter is an Afghani Muslim 30 year old who was incensed at the sight of two men kissing.

Even though he "pledged allegiance to ISIS," his father and his ex-wife said religion had nothing to do with it, that he was not particularly observant. His ex-wife did mention that he was abusive and violent. And his father believes God will punish gay people. A cursory glance makes it seem as though Pride month angered him and that this particular club angered him.

And so he got a gun and dealt with his anger by terrifying and killing other people.

I understand the motive to make people afraid. I understand the shooter's apparent hate and disgust. I assume, if research is correct, that he was probably at odds with his own fascination for men. That somehow, he felt he needed to blot those people out -- get rid of their happiness and ease with their own sexuality. He needed them to suffer and to die so he could feel ok.

Further, he needed to make them suffer and die himself. Apparently, his father's teaching that God will punish gay people was going to take too long for him, or he was worried somehow that God wouldn't make it bad enough and that he would have to help God out.

I always try to understand these things, but there really is no understanding beyond the fact that guns -- military guns, assault rifles -- are easy to buy, as well as the fact that being gay is still stigmatized, as well as the fact that our culture (he was a U.S. citizen) is saturated in violence. It's true that for so many of us what we don't understand -- be it our own attractions or otherwise -- scares us. And for so many of us, when we're scared, we become violently reactive to that fear. That's all I know.

But I also understand that there are beautiful people in this world who were and are the models of me for what dignity and integrity look like. And so many of them just happen to be gay. The world needs more of these models. We need to see peace "with skin on" because God knows we see enough hate with skin on.

We need to see more of those people who say that you can be gay and love God. That you can be gay and be happy. That you can be gay and reconcile with your family. That it gets better, as Dan Savage says. We need models of peaceful conflict resolution, of those truly brave and beautiful people, like my own amazing partner, Diane, who refuse to be afraid of violent and unstable people. Who believe in talking, in listening, in establishing shared humanity. Who truly live the belief that perfect love casts out fear. That's what we need. We don't need more blame, more shame, and more hate.

To everyone in Orlando, or elsewhere, who has lost someone who cannot be replaced, we all cry with you. There's a reason that "family" is a euphemism for being gay. That's why "We Are Family" is played at every Pride event. We are your brothers and sisters whether you know us or not. We are family and we cry over all the things lost in this spasm of blind violent hate. The bravest thing we can do -- the thing that gay people are so damn good at -- is being love in the face of hate. It's our family tradition and it's the family value I'm most proud of.