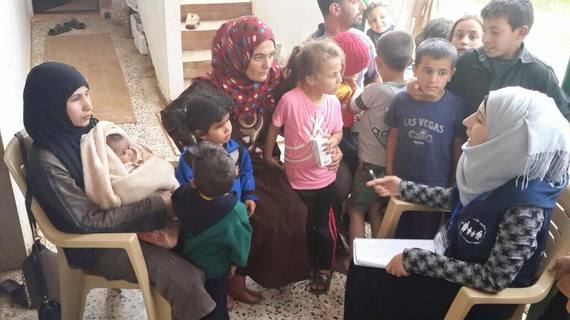 Syria is in the grip of the greatest humanitarian disaster of our time. It is relentless, atrocious and responsible for mass casualties both inside and outside of its borders. Inside the country 13.5 people million are in need of assistance. Four million are in hard to reach or besieged areas and 6.6 million are internally displaced. Outside the immediate borders nearly five million more Syrians are living as refugees.

Yet, if you ask any Syrian, they do not want to leave their country. The perception that they are risking their lives for economic gain is false. It is because they cannot bear the daily sentence of bombs, death and destruction. Imagine, walking down a street and not knowing if you will make it home because you risked going out to get an extortionately priced flatbread to feed your whole family.

As Syria's second city, Aleppo is the one we hear about often in the media. Yet in thousands of other areas, Syrians are also trapped and not receiving aid. Let's not turn our backs on them.

In Syria, an estimated 46,500 women will suffer gender based violence, including rape, as a result of the ongoing conflict. More than 75% of Syrian refugees who've fled are women and children. Young girls are particularly vulnerable, with families making the decision to marry them as the only way to keep them safe. Other girls are at risk of rape and domestic violence, living in cramp conditions or being trafficked or being forced into trading sex for food or supplies. Specialized front line services are needed to offer them support and protection.

The Syrian Family Planning Association (SFPA) has a "safe spaces" approach. Girls are helped by having a checkup and are referred to a specialist counsellor if they've been affected by violence. There they can share their experiences with other women. In some cases, women attend because it's the first time they have ever been left. They have no one left to talk to and are dealing with extreme trauma alone. Services take a life cycle approach. And even with conflict continuing, the assistance extends to teaching vocational skills so that girls at risk can take care of themselves for the future.

Layla* is one of them. Her family's home had been destroyed, and her mother could no longer afford to keep her fed or safe and began trying to persuade her to marry at 15. She knew she wanted a different future and knew about the vocational training courses offered by SFPA . She joined so she wouldn't have to get married. Since then, she has been trained as a seamstress, and when she finished her course she got a place on a microfinance project.

We know aid workers are under attack every day. Their efforts are tireless and selfless and they are on the frontline. Organisations like SFPA - a member of the International Planned Parenthood Federation - are there permanently and its staff often have to adapt to very difficult circumstances. They cannot always use other donor funds they may have available because of the conflict's rapidly changing circumstances or the because of the conditions donors have placed on how they spend it. Any government that gives money always has restrictions as part of accountability remits but there is a point when this becomes disabling.

Syrians don't want to leave. Nor do they want charity. What they want is the chance to help themselves. For this to happen, local organizations in humanitarian crises need flexible and smart funding. If aid is allowed to be flexible and agile, it will allow those who are committed on the ground to be so. It is the only way we can focus on building lives and futures for the people in Syria. The UK has been doing this through it's aid budget with great success. All Governments have a critical role to play to protect and assist those affected by the atrocities and hardships in Syria.

This is a war like no other and it requires a tailored and united effort that spans civilian, political and humanitarian support in every way.

If the right investment is made for localized solutions and services, it will give Syrians a chance to have an equal stake in the solution. This is the only way we can help the people of Syria feel secure and positive enough to visualize a life beyond war.

*Layla is a pseudonym