Steve Jobs' death has garnered a number of reactions, but none as bizarre as this.

Westboro Baptist Church leader Margie J. Phelps has announced that the group will picket the Apple co-founder's funeral, condemning him for "teaching his neighbors to sin." While their actual reasons for promoting the picket seem a bit unclear, how Phelps made the announcement is causing quite a stir (and garnering a few laughs).

She tweeted from an iPhone.

The tweet that has critics pointing out the irony says little more than "He is in hell." The controversial church seems to be sticking by their words, however, ignoring criticism of the method used to get out their message. 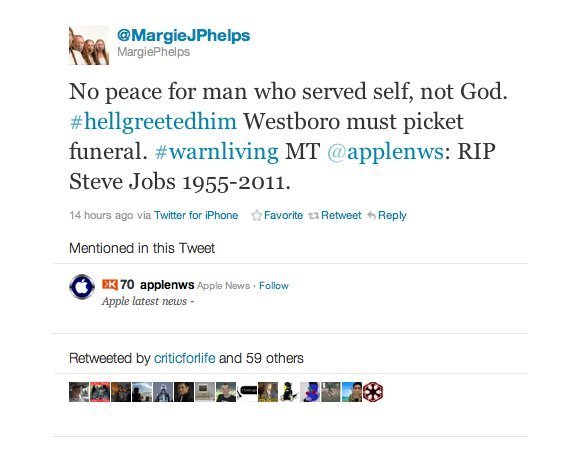 After a number of groups pointed out the irony, Phelps continued to tweet, typing, "Rebels mad cuz I used iPhone to tell you Steve Jobs is in hell.God created iPhone for that purpose!"

The church, which has become famous for its unofficial "God Hates Fags" slogan, has been at the center of many controversial pickets in recent years, including sending congregation members to protest at the funeral of Elizabeth Edwards. The church also threatened to picket the funerals of those killed in the Arizona shootings, an act many found particularly distasteful. Those plans were later abandoned.