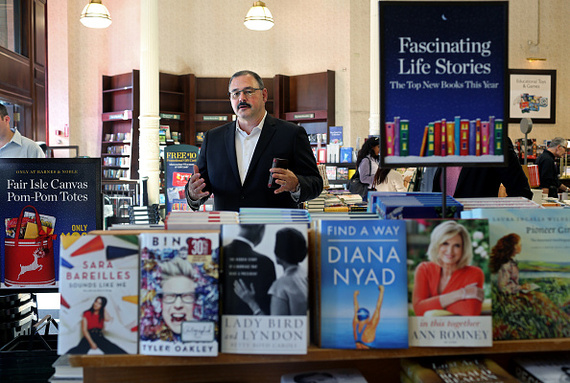 The CEO firing was direct and dismissive. Barnes & Noble didn't stick to the bland yet reliable "we're moving in a different direction" script when it booted Chief Executive Officer Ron Boire. They didn't give him a gentle heave-ho with the old standby "he's stepping down to pursue different opportunities" tale.

Instead, Barnes & Noble whacked their CEO in bold fashion.

The terse press release proclaimed, "The Board of Directors determined that Mr. Boire was not a good fit for the organization and that it was in the best interests of all parties for him to leave the Company."

I can't say that I'm surprised. I've witnessed a major tone and timeline shift between Chief Executives and Boards of Directors in recent years.

Most people attribute the change in corporate governance dynamics to a fixation on short-term financial performance. I believe it's deeper and more meaningful than dollars. Boards are shifting their thinking around how their executives engage and inspire their workforces in order to lead a never-ending series of course corrections and frontline change initiatives.

The core issue is trust. And trust is an endless dance.

During my 16 years of advising senior executives and boards, the dance between the two has swung from gentle ballroom glide to full-tilt boogie. How fast is today's pace? Consider this: Barnes and Noble's next CEO will be its fifth in four years.

Earning trust and commitment has always been a challenge. But now it's crucial to sustain trust in our demanding, disrupted world of slower growth, heightened customer expectations, and frequent swings in the stock market.

I've just wrapped up a summer of delivering keynote speeches at CEO Summits, where I asked top executives from around the world to share their biggest influence challenges. At the top of most lists: How to influence others to trust their judgment.

How do you earn and sustain trust in a chop-chop, rapidly evolving world? Here are five pieces of advice that I've shared with coaching clients:

Address friction immediately.
Never assume the rumor mill is harmless. You must address speculation early or it can balloon out of control, whether it involves organizational performance or your own performance. For example, a top executive on a leadership team I advised was aware that his fellow C-Suiters thought he had a double standard -- a relaxed set of rules for himself and a stricter set for everyone else. He thought he was taking the high road by ignoring the rumors. He was profoundly mistaken. Word got to the Board about his team's perception, and by the time he addressed the issue, it was too late. The board had lost trust in his leadership and cut him loose. He didn't see it coming.

Be mindful of "The Influence Illusion."
Many leaders believe they're influencing others when they're not. They're asserting power. They rely on positional power, including power plays, hissy fits, and guilt trips. Ask yourself (or better yet, ask someone else): are people following because they're committed -- or are they complying out of fear? Influencers earn trust, respect, and lasting commitment. Manipulators and persuaders gain short-term compliance.

Identify your snipers and wingmen.
Before you present an initiative or announce a decision, ask yourself, "Who has the most at stake surrounding this initiative?" Only a fool believes that he can talk anyone into anything. Pinpoint the person or groups who are most likely to resist -- and the specific reasons why. Earning their trust and turning them into wingmen is key to successfully influencing others.

Make your intentions known.
Better to over-communicate than under-communicate the "why" behind your decisions. As a journalist, I've had the five W's of information gathering drilled into my psyche: who, what, where, when and why. Why trumps all others on the trust scale. That's because when people don't hear you state your intention, most will assign the worst possible intention to your decision. It's juicier that way. You'll be in a far better position, should your initiative run into trouble, to maintain trust in your leadership if people were aware of why you made the choice to begin with.

Support the truth-tellers.
The leader is often the last to know what's really going on in the organization. Most people avoid sharing hard truths with leaders because they fear getting their heads handed to them on a platter. It's human nature for people to protect themselves. But it's also natural to want to be recognized. There's a simple way around this classic leadership dilemma of being insulated from frontline realities: invite, model and reward candor at all levels. When others are up-front with you, embrace it and praise them -- publicly.

But if you're a leader who wants to influence with integrity long-term, you can't afford to leave trust to chance. Trust is a fragile, often fleeting state. And so is your credibility as a solid leader. Dance with purpose.