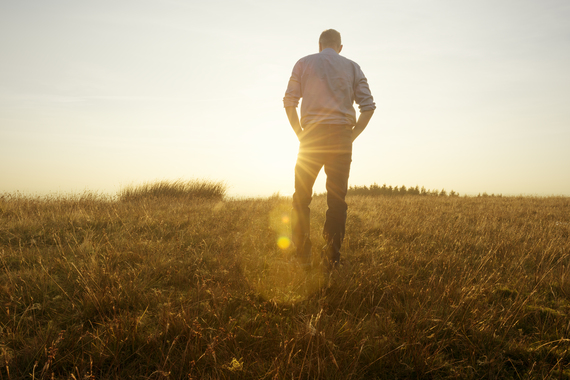 By Andrew J. Hoffman, Holcim (US) Professor of Sustainable Enterprise and Education Director at the Graham Sustainability Institute at the University of Michigan

I play in a casual summer golf league that is as much about beer-drinking banter as it is about hitting a golf ball. We don't generally talk about work. But one day Gregg, a fellow golfer, asked me, "Hey Andy, what do you do for a living anyway?" I told him that I was a professor and that I studied environmental issues. He asked, "Do you mean like climate change? That's not real, is it?" I told him that the science was quite compelling and that I believed that the issue was real. His next question was, "Are you a Democrat or a Republican?" I told him that I was an independent. He replied, "So what do you think about Al Gore?" I told him that I thought Gore had called needed attention to climate change but that perceptions of him unfortunately also helped to polarize it as a partisan issue.

I think about that conversation often. Gregg was not challenging my ideas; he was questioning my motives. He was trying to find out if he could trust me enough to listen to what I had to say -- to figure out if I was part of his cultural community, his "tribe." I can imagine the hesitation he may have had in broaching this topic. Might I turn condescending and give him a science lecture, challenging his lack of deep knowledge on the issue while asserting my own? Would I begin to judge him and his lifestyle, critiquing his choice of car, house, vacation habits, or any one of the multitude of unsustainable activities that we all undertake? Might I begin to pontificate on the politics of the issue, complaining about the partisan divide between Republicans and Democrats or the corporate influence on our political system? These are all plausible and unpleasant scenarios that lead people to avoid discussing climate change. Indeed, according to a 2013 survey by the Yale Project on Climate Change Communication, two-thirds of Americans rarely if ever discuss global warming with family or friends. It seems to have joined sex, politics, and religion as topics to be avoided in polite company.

Still, you have probably had a conversation -- or, as is often the case, a heated argument -- with someone about a similarly controversial issue. It's worth asking what we are trying to get out of these discussions. Are we trying to change "hearts and minds," or are we trying to make a point? Do we want to allow people a face-saving way to come to their own conclusions, or do we want to win, forcing them to acquiesce? In short, how do you want to lead people to hear your point of view? What is your personal model of leadership?

This is a question we all have to ask ourselves. While you learn about the work that needs to be done to bring about a sustainable world, you also have to learn about how people change the way they think. Jeff Pfeffer once quoted Richard Nixon when he said:

It is not enough for a leader to know the right thing. He must be able to do the right thing. The ... leader without the judgment or perception to make the right decisions fails for lack of vision. The one who knows the right thing but cannot achieve it fails because he is ineffectual. The great leader needs ... the capacity to achieve.

How do you want to achieve? How do you want to lead? The answers will be as individual as each person reading this. Look around you to the leaders you admire; each has a different way of convincing, of leading. You have to find yours.

I, for example, have chosen the role of professor; I try to inspire my students through my teaching, and others through my written and spoken words as an academic. As with all roles, mine has both limitations and opportunities. Every professor comes to a point in their lives when they ask, "What is my legacy? What did I accomplish?" We professors can measure our impact by the number of papers we have published in academic journals, and how many times those papers have been cited, but that is not very satisfying. How did we change the way people think? We have no way to measure that. The answer to that question resides in our students and those who read our work or hear us speak.

In defining your own theory of leadership, you have to build the trust of those you are trying to influence, create a vision for the direction we might go, and understand how to overcome people's fears and convince them to follow. This is not easy!

In 2014, J.B. MacKinnon, author of The Once and Future World, was arrested for protesting a pipeline that energy company Kinder Morgan was attempting to build in British Columbia. In an article in Orion magazine about the experience, MacKinnon described feeling a tremendous, almost overwhelming, sense of relief and delight after his arrest, because, as he said, "it feels good to be true to your conscience, to stand up for what you believe in." He said that he was now sleeping well because he was taking action on what he called, "not only a pipeline that will be snaking through British Columbia, but an ideology that is deepening our dependence on fossil fuels." One thing he wrote struck an especially personal chord with me:

I'm a writer, but writing another article, proposing another idea, seemed unlikely to make a difference. The problem at this point is not a shortage of words or ideas. The problem is a shortage of people on Burnaby Mountain, at New York State's Seneca Lake, and in the many other places where local people are fighting a doomsday ideology playing out in their backyards.

That should sting a little for professors; it is a challenge to reexamine what we are doing and whether we should be do doing something differently. But reexamination is something we should constantly undertake. In so doing, we revitalize who we are and whether we are progressing in our life's work.

As I undertook this reexamination in light of MacKinnon's words, I found a funny irony in his message. While he said that writing will not change things, his writing touched me deeply. So his writing another article did make a difference, at least in me. Indeed, the very fact that he wrote about his arrest is a sign that he had not lost faith in the power of words, but instead was seeking, through his arrest, new and more powerful things he could say.

His words remind me of the awesome responsibility and opportunity we have for prompting change through our ideas, our ways of viewing the world, and our style of leadership. MacKinnon has found his; I have found mine; I hope you will find yours.

Andrew J. Hoffman is the Holcim (US) Professor of Sustainable Enterprise and Education Director at the Graham Sustainability Institute at the University of Michigan. This essay is drawn from Finding Purpose: Environmental Stewardship as a Personal Calling (2016) by Andrew J. Hoffman. Available from Greenleaf Publishing.