Procol Harum's "A Whiter Shade of Pale" first hit the airwaves 41 years ago, and was just named the UK's song most played in public places by BBC radio. Why a Whiter Shade of Pale? Why not a Darker Shade of Tan? Lyricist Keith Reid was kind enough to check in from London and let me ask him about the history of the song.

How is it that the most unique lyrics end up the most universal, as inscrutable as they are?

It's an interesting question. It struck me as a very useful phrase, a whiter shade of pale. I mean people now use it all the time. I was just reading an article in the New York Times and they were talking about a drink called absinthe and they called the absinthe a lighter shade of green. It went into the Oxford Book of Quotations as a phrase, so it reverberates. I think the reason is really because it's kind of something which is impressionistic, so people never really get to the bottom of it. So it has some kind of mystery to it like a painting, you can always find new levels of meaning. So in answer to your question why can something inscrutable be so popular, you can just kind of sit back and look at it endlessly.

When "A Whiter Shade of Pale" hit Number 1, did you expect it to stay in the rock and roll pantheon for decades?

The answer to that is absolutely not. Ringo Starr's famous quote is, 'I was going to open a hairdressing salon. Who knew any of this would last?' I never gave it a moment's thought really, but am very happy for it to have survived.

What would you tell a young songwriter about the business that you wish someone had told you 41 years ago?

What people told me was, forget it. I was taking my stuff around, knocking on doors, going to see everybody. I was turned down so many times. Afterwards some people said, 'I don't know how I missed it.' We even made a recording similar to the final track and played it for people and they still passed on it. I think even the record company at the time wasn't sure about it. They decided to give it a shot, played it on the radio and it's that cliche - the phones just lit up.

Ultimately you just have to keep pushing through, and don't let anybody tell you that you can't. They sure told me I couldn't.

And they were wrong.

But I lived to the the tale.

What inspired you for The Keith Reid Project CD, The Common Thread? You've mentioned that moving to New York helped bring about a different tone.

I moved to New York in '86, had basically worked with Procol Harum and just decided to meet different musicians, singers and songwriters, started to explore avenues of writing and the kind of music I wanted to do. Later I started compiling tapes and putting stuff together. A tape found its way to a producer in Germany. He said, "This sounds like a record, why don't you do some more work on it?" I was very happy to do that (Singers include Chris Thompson, John Waite, Southside Johnny, Terry Reid and Steve Booker).

How can aspiring songwriters take back the reigns of control for their product?

These days it's really easy to do because you don't have to sign with publishing company or record companies. You just do you own thing and put it on youtube or put it on my space and people pick up on it. When I started out unless the establishment let you in, it was very difficult. Now it's wide open, essentially anybody can do it from their bedroom.

That applies to writing too, there's more content out there but also far more venues.

It's available to everybody and therefore it's hard to get your head and shoulders above everybody. I think it's a better problem to have. Getting in the front door was even more difficult.

There is no more front door.

Dr. John talks about what happened to many New Orleans musicians when they went to LA in the '60s - so many artists were taken advantage of, but now the control can be back in the hands of the songwriters.

That's true, I hear about such and such a person who made a record and stuck it on youtube and half a million people see it and suddenly everyone's calling them up. That's fantastic. I'm envious.

Me too. Just one last shot in the dark, As the Miller Told his Tale - is that line inspired by Chaucer?

Really? That was my ringer question.

That's going to shock the hell out of fellow English lit majors.

I used my imagination.

The talk turned to songwriting by musicians here in New Orleans, and Reid described Procol Harum in their early days playing bills with Dr. John and the Night Trippers in New York.

I first saw him with Chris Wood from Traffic. He was playing guitar then. I'm a huge fan of his music - we were friendly with The Band and they turned us onto his album, Dr. John the Night Tripper. We were very into it."

Songs by the late Barry Cowsill, whose work is represented by the same promotional firm as Reid's, will debut in New Orleans on Saturday (16th), in a CD release party forUS1, recorded the summer before Barry was lost to Hurricane Katrina.

Here's to undeniable talent that finally finds its way through the door, and thank you to Keith Reid for A Whiter Shade of Pale: 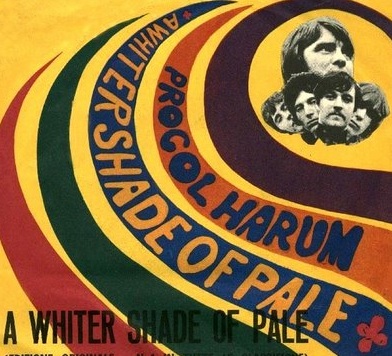 We skipped the light fandango

I was feeling kind of seasick

but the crowd called out for more

The room was humming harder

as the ceiling flew away

When we called out for another drink

the waiter brought a tray

And so it was that later

as the miller told his tale

that her face at first just ghostly

turned a whiter shade of pale

She said, 'There is no reason

and the truth is plain to see.'

But I wandered through my playing cards

and would not let her be

one of sixteen vestal virgins

who were leaving for the coast

and although my eyes were open

And so it was that later

as the miller told his tale

that her face, at first just ghostly

turned a whiter shade of pale