I think that it's important that I share a bit about what's happening in Chicago right now. For the past two days, Chicago teachers have gone on strike for a variety of issues. Unfortunately, media reporting on the lead-up to the strike itself was terribly ignorant of the major issues --especially considering negotiations have been happening for nine months -- and was in large part biased against the Chicago Teacher's Union. Read about this issue in the news media with a careful eye: this is a strike about the future of public education in the United States.

Here are some of the reasons we are striking in no particular order:

No one wants to hear about teacher compensation. However, Chicago teachers were mandated to work a longer school day and year -- for high schools: about 20 minutes longer than the typical L.A. school, and about 10 more days a year. This longer day and year came one year after the school board decided not to pay teachers a four percent raise that they were contractually obligated to pay, and then literally the next month turned around and started offering raises to individual teachers and schools that "volunteered" to work a longer day. Importantly, while teachers are extraordinarily upset about the way the longer day and year played out, the Union and District are coming closer to an agreement over teacher compensation. If you've read about it in the news, it has been reported as a 16 percent raise over the course of four years. However, the actual raise they are offering is 2.25 percent a year for four years. If you do the math that adds up to nine percent. Where are they getting the other seven percent? No one knows, but the mayor said it to reporters, so now that's what's getting reported. However, I want to emphasize that compensation will be worked out.

Illinois passed a state law requiring Chicago to implement a new evaluation system. It required that the union and district work together to create it, but that if they could not come to an agreement-- the district could just implement its own final offer. This has led to an evaluation system that has some good aspects: it does a much better job of creating an objective criteria for "good" teaching. But it also has some terrible aspects. For example, the current rubrics would rate teachers on a 1 - 4 scale (with four being the highest). Teachers would then be rated 1 - 4 on four different components and those scores would be averaged together to create an overall evaluation score. Teachers that receive the lowest rating two years in a row not only can be fired, but they will lose their teaching license. While teachers want an effective, multi-faceted evaluation system, the current rubrics state that if you score a two (considered basic) on all four components, then you are actually rated a one. As a comparison, imagine that I graded an essay on four components and scored each component as a "C," but then made the overall essay grade a "D." Doesn't make sense, right?

Another problem with the system is that the criteria for category 4 (distinguished) teaching describe good teaching, but they are so stringent that they are almost impossible to achieve. For example, in the component on classroom management, if you have a student that disrupts class, and you deal with the disruption to get the student back on track, you are rated as a three. You can only be rated as a four if you never have any students that are disruptive. This assumes that teachers have total control over all students at all times. To me, effectively dealing with disruptive students is distinguished teaching, especially when working with students that are not intrinsically motivated. There are myriad other issues with the current proposals, but [the primary issue is that] teachers see a future where the state/district will demand that teacher pay be tied to evaluations. If we allow the district to create an evaluation system that is rigged to rate all teachers as mediocre, it will allow them to justify freezing or cutting our salaries, or even firing teachers whenever they like.

In addition, the district wants to tie teacher evaluation to student standardized testing. To do this, in my school, of the 10 additional days in the school year, seven of them will be used to give students standardized tests. For 11th graders, this test is the practice and real ACT, so it is significant. For students in other grades, they are all practice tests. So, teachers will be evaluated on student test scores that will mean nothing to the majority of students. Also, the district asked teachers to create what they call "Performance Tasks," which are standardized tests to be given in an individual classroom. While teachers helped to develop these tasks, the district method of grading the tasks is designed to rate all teachers as mediocre. The grading system ranks students on a 0 - 3 scale (with three being the highest). Teachers will be evaluated based on whether or not students move up in the 0-3 scale. The U.S. history task (which is similar to a DBQ) is graded out of 30 points such that a 28-30 counts as a three, an 18-27 counts as a two, a 8-17 counts as a one, and below that is a zero. In this case, a student could score an 18 the first time he takes the test, and a 26 the next time he takes it (improving from a 60 percent to an 87 percent) but for the purposes of evaluating his teacher that student will not be considered "improved."

Teachers believe in a multi-faceted evaluation system, but the way this evaluation system would be implemented is not fair to teachers. In addition, while state law requires that part of teacher evaluation be based on student test scores, teachers reject the notion that student test scores are an effective means of evaluating teacher performance. Using student test scores to evaluate teachers is not reliable. Teacher scores vary from year to year, even though the teacher is following the same principles. Not only is it unreliable, there is no evidence that is a valid measurement of teacher performance.

The school district plans to close 100 "underperforming" schools over the next several years and replace them with new schools and charters. This is nothing new in Chicago. For the past eight years, CPS has closed over 100 schools, fired all the teachers, and re-opened them as new schools and charters. To the surprise of no one, the vast majority of the new schools and charters that were opened scored the same as the previous schools. Then why close neighborhood schools and force kids to travel to different areas of the city to go to school...? To fire experienced teachers that earn a higher salary, and replace them with inexperienced teachers that make less money. Since this is the goal of these new schools, is it any surprise that they are not outperforming the old schools? The Union wants a system in place so that if the district decides to close schools, the teachers that get fired (through no fault of their own) have the first opportunity to get the new jobs that open.

The Union does not support the closing of neighborhood schools. This creates disruption in communities and in the lives of students. Further, it will remove experienced teachers from the classrooms that need them most.

Lots of schools in Chicago are ill-equipped for the 21st century. They lack libraries, computer labs and even air conditioning. For example, last week it was 94 degrees in my classroom. This was not an anomaly [and yes, teachers buy and bring in fans]! This happens regularly when it is close to summer time. The Union wants the district to fix these problems.

These are only a few of the issues that we're fighting for; my goal here was to try and provide some detail about those issues because I feel that most news reporting has not done that. We are on strike because we refuse to accept a system where the mayor and his appointed school board can systematically lower scores on teacher evaluations in order to justify the privatization of education. 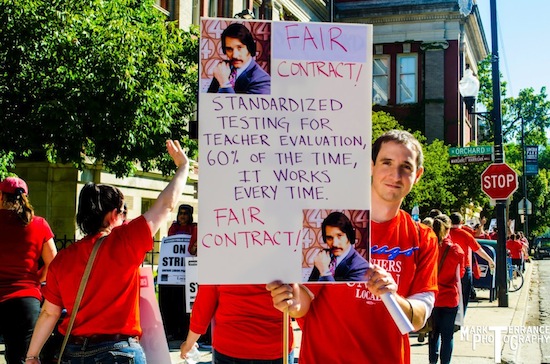 This blog post is part of HuffPost Chicago's "State of CPS" series, which features perspectives from Chicago Public School teachers, students, administrators, staff, parents and others experiencing recent changes to the district firsthand. Interested in sharing your take? Email us at chicago@huffingtonpost.com.