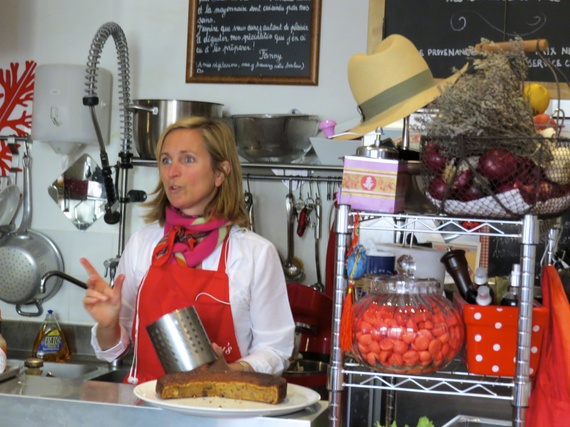 Some French chefs study at schools like Le Cordon Bleu in Paris. For others, cooking is a family affair.

Fanny Jehanno falls into this second group. She's the owner, chef, welcoming committee and, quite possibly, chief bottle washer at Fanny's Bistro Gourmand, a hole-in-the-wall-sized lunch place in this Provence city that serves up fresh, farm-grown food, warm blends of tea on cold, damp days, and some of the best chocolate fondant -- Jehanno's specialty -- that you'll find anywhere.

I interviewed Jehanno a few weeks ago, in French, on a slow afternoon. Given the sad state of my language development, this means I understood about half of what she said during 90 minutes of conversation. But I do trust my taste buds, and I can tell you that Fanny's is a place to go with an appetite and time to spare.

"This is amazing," my wife Kathy said, when we stopped by for lunch on Thursday, March 13. "I have to give you a bite, but I hate to."

The "this" that Kathy was referring to was a tart, sort of like a piece of pizza with divine goat cheese melted thick on top. Her assiette, or plate, also included a salad and a wonderfully flavorful mix of noodles, carrots, zucchini, tomatoes, eggplant and Bermuda onions, all covered with a mix of what seemed like Middle Eastern spices that filled my mouth and nose.

I had opted for the colombo de porc, a pork dish seasoned with the "spices of French Guiana." It was really good. But the riz au curcuma -- rice with tumeric spices -- that came with it was from the gods. And there was nothing dainty about the portions. Kathy's dish cost about $15, mine a few dollars more.

"This place is really good," I told Kathy.

I would define Fanny's a bit differently. To me, it's more like really good home-cooking, with background music that fits the food. With our flavorful lunch, for example, the music in the background seemed mildly exotic, somewhere from the Middle East. When I'd come to interview Jehanno a few days earlier, a wet day suited for her special blend of tea, earthy American jazz played.

Jehanno had chosen a slow day during the school vacation week to give us time to talk. I figured it wouldn't be too tough an interview since she has lived in the States and England. Her English is considerably better than my French. But she chose to speak French, perhaps because an intern from my language school, IS-Aix, was sitting beside her. I didn't want to spoil the fun or dispel the notion that I understood what she was saying, even though, alas, that wasn't entirely true.

But then, Jehanno is used to giving French lessons. She's taken on three interns from IS-Aix, young students looking to learn the language while they work. Jehanno herself spent a year in Los Angeles in high school. About a decade ago, she says she struggled to learn a very different English during a prolonged stay in London.

A fit and outdoorsy-looking former tennis teacher, with the hint of smile lines at the corners of her clear, blue eyes, Jehanno grew up near Paris, cooking with her parents and grandmother. From her father, she learned to cook fresh vegetables from the garden and mushrooms that she and he would pick in the forest. From her mother, the "queen of potato salad," she says, she learned "simple but very tasty cooking." And from her grandmother, she learned how to make fondant au chocolat, a chocolate dessert that melts in your mouth. It remains her specialty to this day ("tout ma vie le fondant chocolat," she says).

Jehanno's first venture into the restaurant business came as a young woman when she, her mother and her older sister owned and ran a piano bar in Montmorency near Paris for three years. Later she worked in insurance in Paris before moving, with two young children, to Lourmarin at the foot of the Luberon Mountains in 1999 for Provence's sunshine and slower lifestyle. She taught tennis for awhile, leaving in 2005 for London. A year later, she returned to Provence, this time moving to Aix, a place she believed her children, now 22 and 15, would thrive because of the schools and quality of life.

Jehanno wanted to find work that would allow her to be home in the evenings and to take off the August holidays when her children were not in school. The idea of Fanny's was born.

Here her story, told in French, got a bit murky to me. But one thing is really clear. Fanny Jehanno is proud of what she's accomplished -- by herself, she said more than once. She found the building, in the old city, but not in its most expensive center. She negotiated the price, worked out the insurance, designed the interior, which she's already changed once.

In 2010, Fanny's opened its doors, a lunch place which seats 17 or 18 inside and another 6 or 8 outside when the weather warms up. Some people come in for takeout, too, and Jehanno sells a few specialty items -- a mix of her spices, for example.

For much of the first year, Jehanno says, she took no salary. Today business seems pretty good. All but two seats filled up during our lunch. Several reviews, one from the local newspaper, La Provence, adorn the wall beneath the chalk boards that serve as a menu.

About half her clients are regulars, she says. On the day Kathy and I went, seven women sat next to us for what turned out to be a midday birthday party.

The regulars didn't surprise me. What makes this place different, along with the quality of the food, is that Fanny's feels as if you're eating -- well, in Fanny Jehanno's kitchen. She cooks on the other side of a counter. She uses all regional products -- organic flour, organic wine, vegetables from the market, meat from the best butcher in Aix. She says she decided early on that she would focus on quality rather than cutting costs as more and more restaurants in France seem to be doing today. The result of this cost-cutting, she says, is that some of the food being sold in 70 percent of French restaurants today is being bought pre-packaged and already prepared.

"C'est dangereux," she repeated twice. "It's dangerous." Sadly, it is a lament I've heard and read about fairly frequently since we landed in a country that has long been considered the place for cuisine.

At Fanny's, that reputation for quality remains well-deserved.

But before signing off, I must, as with any good French meal, save the best for last: le dessert.

On the day of our lunch, Kathy had le delice de Fanny, fondant au chocolat, for about $6.50. I had the gourmet coffee, which came with a sampler of the fondant, an apple crumble and a carrot cake, all for about $10.50.

What can I say? As the birthday crowd at the next table saw their desserts being served, one of the women exclaimed, "ooh-la-la."

We felt the same way.