While law school tuition has skyrocketed over the past 15 years, federal loan limits have remained stagnant, putting more pressure on students to take out higher-cost private loans.

Stafford loans used to cover full tuition for out-of-state students at 97 percent of public university law schools and 80 percent of private law schools. In the 2007-08 school year, those loans covered only 22 and 11 percent, respectively. 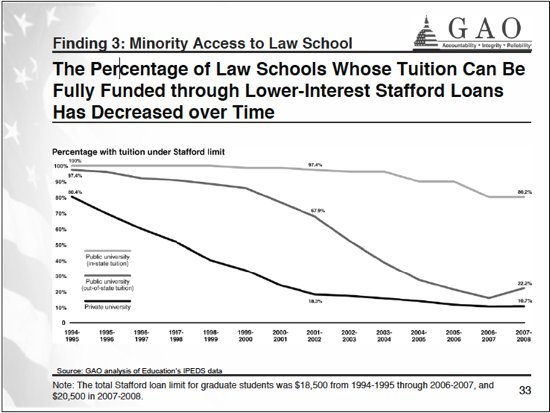 The effect has been calamitous for students. The average law school graduate in 2008 left school with more than $71,000 in debt, the GAO reports.

"The rising debt burden of law graduates and other graduates has a negative impact on the ability of highly qualified individuals to pursue careers in public service," the American Bar Association reports. The ABA has been calling for Congress to raise the borrowing limit under the Stafford loan program.

The U.S. House of Representatives recently passed a bill calling for reform in the loan program. It's now in the Senate.