Well, apparently "who pays taxes" is back in the news today, so who's up for a bit of rehashing some older work by my CBPP colleagues?

But if you draw a paycheck, you might not pay federal income tax but you'll pay federal payroll taxes (28% of the 46%). Or if you put gas in your tank (federal excise tax) or buy something in a state with a sales tax, etc.

So pretty much everybody pays a tax in there somewhere.

For that matter, you could have very high income of a type that's given special treatment by the tax code, like capital gains, and pay less in taxes than your typical wage earner. You can even be rich and join the group that pays no federal income taxes, again due to deductions, credits, the writing off of various losses or expenses. According to the IRS, in 2009, about 21,000 tax returns with income above $200,000 had no federal income tax liability.

The first link above provides much useful evidence of taxes paid across the income scale, including payroll, excise, and state/local taxes.

But I also find this data, from Citizens for Tax Justice, to be elucidating in this discussion. It compares the share of pretax income going to each income class to that of taxes paid, including all levels of taxation -- national, state, and local -- and capturing income, corporate, payroll, excise, estate, sales, et al in terms of different types. 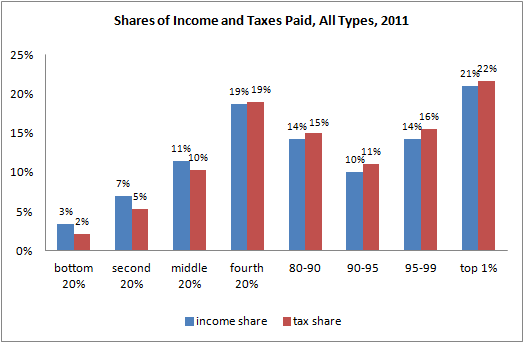 For the most part, tax shares are about equal to income shares. Those in the top 1% (average income, $1.4 million) pay 22% of all types of taxes and hold 21% of all income. Those at the bottom end pay 2% of all taxes and hold 3% of all income. The system, in terms of effective rates (your tax liability as a share of your income) is mildly progressive, with a 17% rate at the bottom, 25% in the middle, and 29% at the very top.

Look, people in my biz are constantly writing and reflecting on these issues of fairness in the tax code, and they're important. But to be perfectly frank, the debate is wildly overblown. The relatively marginal changes being contemplated -- e.g., allowing the high-end Bush tax cuts to sunset -- won't have much effect on any fundamental economic variables, except the budget deficit, which it will help to lower a bit.

Almost everyone pays some taxes. Meanwhile, the federal code has become less progressive and is raising too little revenue. At least from where I sit, those are the relevant facts of the case.