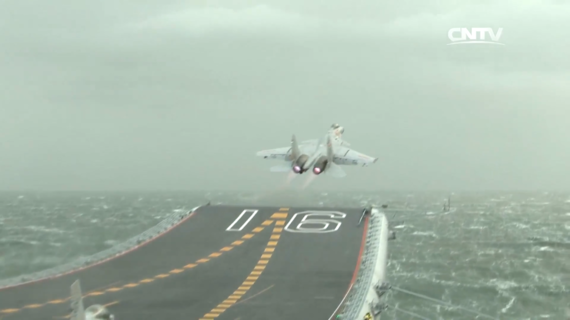 Question: Which statement most accurately describes China's only aircraft carrier, the Liaoning?

1. It is an important symbol of national pride to Chinese citizens
2. A small training carrier posing no threat to US carrier strike groups in the Pacific
3. Can exert strong coercive pressure on other countries in the region like
the Philippines and Vietnam
4. All of the above

There is no question China's only aircraft carrier, the Liaoning, poses no direct danger to the United States. It is a relatively small carrier with little in the way of advanced electronics or weaponry; and, because of its short flight deck, it is launching under-equipped planes.

That said, many experts who have dismissed the carrier as nothing more than a symbol of national pride may be significantly underestimating its training value as China constructs several much larger and quite modern carriers. These same experts also are missing the role of the Liaoning as a coercive tool as China seeks to resolve many outstanding territorial disputes in the East and South China Seas in its favor.

In fact, the story of the Liaoning reveals as much about Chinese deception as it does about China's global military intentions. It is a long and twisting tale that begins on December 4th, 1988 -- the day the Soviet Union launched a brand new aircraft carrier called the Riga.

Exactly a decade later and seven years after the fall of the Soviet Union, that aircraft carrier, by then renamed the Varyag, sat as a rusting hull stripped of its engine and rudder wasting away in a Ukrainian shipyard. That's when a group of former Chinese military officers purchased the carrier for the alleged purpose of turning it into a floating casino berthed in Macao.

Of course, this casino ruse hardly fooled the US State Department. A similar Chinese front company had purchased the Australian carrier HMS Melbourne allegedly for scrap just a few years earlier, but the flight deck was kept intact to train pilots to in carrier takeoffs and landings.

To stop China from getting its first operational aircraft carrier back to a Chinese shipyard for renovation, US officials quietly pressured Turkey to block the towing of the carrier through the Bosporus Strait. However, a cash-strapped Turkey eventually succumbed to the lure of Chinese inducements, and the ship was freed.

After a perilous journey back to China - at one point the towed ship broke free in high winds and heavy seas - the carrier was refurbished and refitted in a Dalian, China shipyard; and it would complete its first sea trial in August of 2011.

Why Aircraft Carriers Still Matter (To China) from Peter Navarro on Vimeo.

Today, the Liaoning is indeed a great source of pride to the Chinese people. Its picture is everywhere, and everyone from little children to senior citizens love to mimic the iconic deckhand or "shooter" pose that signals each plane's takeoff. This is light years away from the 1970s when one Chinese official famously remarked: "China will never build an aircraft carrier. Aircraft carriers are tools of imperialism, and they're like sitting ducks waiting to be shot."

Today, the Liaoning is also a great source of fear to nations like the Philippines and Vietnam - both of which are involved in contentious maritime disputes with China. As Heritage Foundation scholar Dean Cheng has noted:

When you look at the South China Sea and when you look at where various countries have their airfields and their air forces, what you can very quickly see is that much of the South China Sea is very far from land. So, as a result, if you put even a small aircraft carrier there, what you can create is something like an air defense bubble; and one of the lessons the Chinese have taken away from the wars of the past twenty years - Desert Shield, Desert Storm, the Balkans, Afghanistan - is that air superiority is essential to winning modern wars. You may not win with air superiority, but you will certainly lose without it; and so the ability to deploy an aircraft carrier, even if it is just to keep three or four modern aircraft overhead, is a huge advantage when everybody else in the area really can't put any aircraft overhead for any sustained period of time.

As for the Liaoning's broader strategic value, it is true that the carrier lacks the sophisticated avionics and flight control software of an American carrier. In addition, because it is a full football field in length shorter than American carriers, the planes that take off from its deck also cannot carry the full complement of weapons that American planes can.

That said, China looks to be playing the long game when it comes to establishing hegemony. That's because as a training carrier, the Liaoning fits in quite well with Admiral Liu Huaqing's original vision of global force projection by the Chinese navy by 2050.

Of course, once China is able to field its own modern carrier strike groups, the possibility of conflict between China and the United States will likely increase - perhaps exponentially. This will be particularly true if China seeks to use its enhanced naval power to impose its will on lesser-equipped nations like the Philippines and Vietnam - as it has already been doing with considerable success.
_________________________
Peter Navarro is a professor at the University of California-Irvine. He is the author of Crouching Tiger: What China's Militarism Means for the World (Prometheus Books) and director of the companion Crouching Tiger documentary film series. For more information and to access film interview clips, visit www.crouchingtiger.net or see his book talk on CSPAN2.