There were plenty of reasons to be disappointed in America over the weekend. Most of them have much more gravitas than this issue, but this one is no less important.

You see, Grown Ups 2 did more money at the box office than Pacific Rim for their opening weekends. In fact, Grown Ups 2 beat by at least $4 million.

This is a travesty of the highest order.

Pacific Rim is perhaps the best summer movie of the year, hands down. It's an original idea, it's a good story well told, and it's from Guillermo del Toro, one of our most visionary directors. It's a masterful deconstruction of summer movies as a genre, transforming into the film Michael Bay only hoped he could make. I was so taken with the movie, I had to go back and see it a second time, dragging my kids to see it with me this weekend. Not only did they love it, canceling the apocalypse is about all they've been talking about.

Every trope you'd expect in a summer movie is worked from a completely fresh angle in this film. It's filled with strong heroines, powerful minority characters, and there's not a negative racial stereotype to be seen.

And it's full of brilliant, subtle social commentary: for instance, building a wall won't keep the undesirable elements out, whether those "undesirables" are three hundred foot Kaiju looking to destroy a city or an immigrant looking for a better life.

Ever since I interviewed the screenwriter, Travis Beacham, and got a read on his passion for the project, I had an inkling this film would be special, and it was.

We got something Hollywood never gives us: an original story with new characters on a massive scale.

And what did America do? They went to see drivel like Grown Ups 2 instead.

There's a reason that reviews for Grown Ups 2 were embargoed, it's hovering at the 7 percent mark on Rotten Tomatoes. Pacific Rim, on the other hand, is receiving rave reviews and hovering closer in the 70-80 percent range.

Sure, Grown Ups 2 is "critic proof," but we should know better, shouldn't we?

Grown Ups 2 is never going to inspire further exploration into its universe. Its characters and built world aren't so interesting that we'll want games and stories told in it. There's nothing rich about it and there's nothing enriching about it. It's pure lowest common denominator. And maybe that's why it came out on top in the United States.

Look at this exclusive peek at a rendering of Gipsy Danger, the main Jaeger in Pacific Rim. 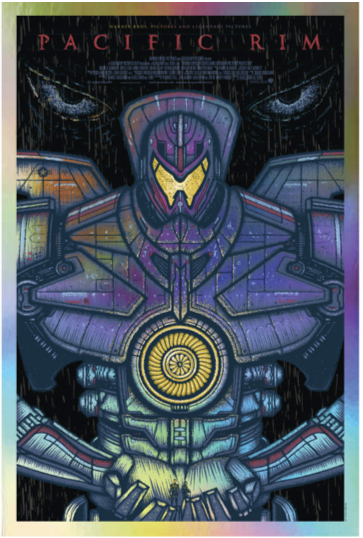 Artist Todd Slater put this dazzling piece of art together for Odd City Entertainment . After seeing images from the film, the artist said, "I was immediately struck by the
scale of the Jaegers versus the humans. These pictures served as a reminder of how fragile human life is and I decided to create my image around this thought. I wanted to depict these giant machines as the protectors of humanity from the mysterious beasts that have emerged from a portal beneath the ocean."

Do you think that kind of artistic epiphany and introspection would be possible with Adam Sandler's latest film?

I'm thinking not so much.

Let's get our collective act together and put this movie over the top. We'll all be better for it as a movie-going public.

Bryan Young is an author and the editor-in-chief of the geek news and review site Big Shiny Robot.