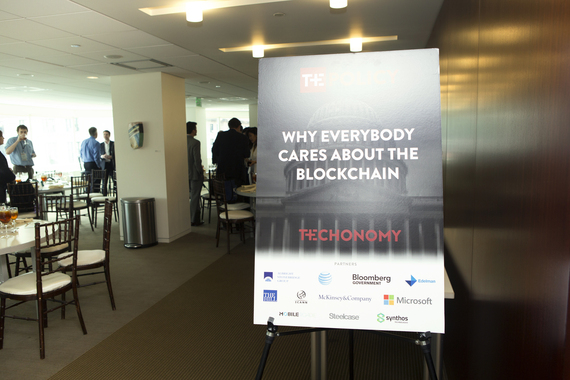 The blockchain is a key part of the system that underlies recordkeeping and transactions for Bitcoin, the virtual currency. But there are much bigger opportunities ahead for this decentralized recordkeeping system.

In a session called "Why Everybody Cares About the Blockchain" at the inaugural Techonomy Policy conference earlier this month, panelists emphasized repeatedly that the database holds tremendous promise for an array of uses in banking, conflict tracking, and voting, among other things. It was a wide-ranging discussion, reflecting the vast possibilities proponents see for this contemporary technology.

"Wouldn't it be awesome if we had one universal ledger that we could use for everything and that was accessible to everybody?" said Jerry Brito, executive director of Coin Center. "Well, that is what the blockchain is. It's a decentralized and open ledger."

The blockchain's potential, its advocates say, extends across any industry or social activity where recordkeeping takes place. That is just about all industries and activities. Clearly, the blockchain can be used for more than buying and selling. A global network of computer users maintains the blockchain in a manner that might be thought of as like a Google database that's shared with everyone in the world. Entries are recorded in the ledger and can never be deleted or edited, because the system is by design only sequential. New transactions can be recorded, but old ones can never be erased.

Ledgers and databases today typically are centralized and only their owners can access and make changes to them. They are closed for reasons of security, but this means that the ledger operates solely with the owner's permission and that only these owners are considered trustworthy. Ledgers underpin much of the information infrastructure that society relies on today, including the banking system, web domains, and identity-management systems like passports or drivers' licenses.

But with the blockchain, its universal ledger means that direct transfers can occur instantly and without fear of manipulation, because there are no gatekeepers or middlemen to slow them down or meddle with them.

This promise of better recordkeeping enticed the Nasdaq stock exchange, which still keeps record with paper certificates, to give the blockchain a test run. In May, the exchange announced it would use the technology with its private-markets platform, which firms use as they ready for an initial public offering. The companies will be able to trade private shares in a pilot project using a ledger based on the blockchain. If it goes well, the exchange will expand its use to other platforms.

Because the fees to operate it are so low, the blockchain may also be used for banking services for the poor and those without ready access to financial institutions. There are 2.5 billion people without bank accounts worldwide, according to McKinsey, and many of these people are expected in the near future to start using smartphones, as just about all the affluent people in the world have already. Theoretically, these phones could be used to access the blockchain for banking, Brito argued. Cellular phones have already allowed people in the developing world to bypass intermediaries, whether it's to make and receive payments or to exchange health information. The reception to blockchain and Bitcoin overseas is better than in the United States, where it's often thought of as "Monopoly money," because our financial systems are trusted and there is ready access to money.

"The financial infrastructure here works. In other places it doesn't," said Brian Forde, director of digital currency at the MIT Media Lab and until recently a technology expert inside the White House. "When you find governments and cities in crisis, you find more reception to this."

Digital copyrights could also be swapped on the blockchain. A hard copy of a book can be bought and resold today without copyright infringement. Not so with an e-book. Users are barred from transferring digital books to others. The blockchain could allow the easy transfer of digital assets.

"Anything that can be saved digitally can be saved in the blockchain irrevocably," said Brad Burnham, managing partner of Union Square Ventures, a venture capital firm. "It's public data managed by a private key," he added, referring to the blockchain's sophisticated security features.

But this technology worries regulators because of its potential for misuse in black markets. Recently the U.S. Justice Department successfully prosecuted the founder of the Silk Road, an underground market where illegal goods were bought and sold with bitcoins. He was sentenced to life in prison after his service was used for drug deals and other illegal activity. Partly in response, New York recently issued a law to regulate digital currencies. Firms that use the currency must record personal information from their users so they can no longer operate anonymously. New York's so-called BitLicense is aimed at preventing money laundering, terrorism funding, and fraud. It also insists that companies operating Bitcoin-based services have at least $2.5 million in backing.

Panelist Burnham calls that a very shortsighted restriction. "I think regulators are prone to reduce risk," he said. "The real crime is who will get hit? They're regulating entry because it now costs you $2.5 million to enter the market. That would be a real loss to society. I think the New York law overstepped and they missed a huge opportunity."

Panelists worry that other states might follow New York's lead and impose onerous regulations on the flourishing blockchain startup culture that would make it near impossible for new companies to succeed or for the community to grow. With the potential to create an enormous range of new and low-cost services for companies and private individuals, it would be a missed opportunity if this new industry were killed.