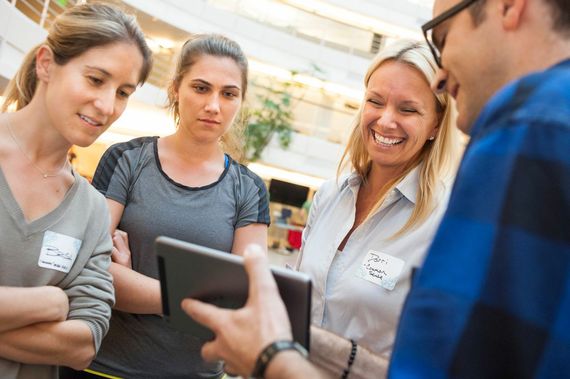 As with so many things, it was only after we left our accelerator experience at co.lab, sponsored by Zynga.org, that we truly started to take stock of its lasting value. As a small, indie, education start-up working out of Sioux Falls, South Dakota, having the opportunity to spend time learning out of the offices of an educational games accelerator based in San Francisco, made quite the impression.

A year later, we thought we would share some of the more enduring insights that we gleaned from this experience. After living through the adventure, we actually now have a much better understanding of these cohort-based mentorship programs. Before we get started, we should probably add one, rather strong caveat. Namely, when confronted with the option, we think everyone should choose to join an accelerator.

In a very real, almost palpable sense, accelerators harken back to the forgotten days of apprentices, where the long afternoons of tedious practice spent toiling in the hot afternoon sun were rewarded by the cool breeze of Olympian-Inspired dreams captured by the main nightly event. In such moments, everything is somehow leveled, made equal by the promises of opportunity.

Accelerators rapidly open doors, taking you from ideation to execution, if you're ready for the ride.

Built on a model of mentorship -- with similarly like-minded individuals passionately working on challenges they find of interest -- accelerators are unique because they are less about overt, didactic instruction and more about trying to inspire a sense of discovery, perseverance and focus through experience. The main idea behind this framework is that nothing beats the practicum of real-world applications. So, accelerators are more like trade schools than universities.

While rather novel in approach, accelerators are not without their limitations. Many, for instance, still contain the remnants of traditional education institutions, and the relics of a one-size-fits-all curriculum. It's hard to dust off century-old habits, but if anything can do it, it's the speed of an accelerator. However, if we can be so bold, these types of programs are unconventional in their radical approach to rethinking the master-disciple relationship, which, for us, is illuminating.

We're reminded of a wonderful quote from the great English philosopher, Alfred North Whitehead, who pointed the way toward rethinking, or, in the least, reassessing, the values of education that our society seems to hold so dear:

"In my own work at universities I have been much struck by the paralysis of thought induced in pupils by the aimless accumulation of precise knowledge, inert and un-utilized. It should be the chief aim of a university professor to exhibit himself in his own true character -- that is, as an ignorant man thinking, actively utilizing his small share of knowledge. In a sense, knowledge shrinks as wisdom grows: for details are swallowed up in principles."

Of course, this is not to say that we didn't value the expertise of our mentors. Or, further still, that expertise was lacking. Nothing could be further from the truth. And, rest assured, we never called them "ignorant," even in the grandiose context of Whitehead. On the contrary, our mentors adopted the position, not of experts, but of fellow journeymen -- sharing their knowledge in the spirit of generosity. It's here where we most feel the fault lines of old ways of thinking. Not unlike Whitehead, these new types of teachers envisioned their role as one of collaborator, as if to express, "we're in this together."

What our teachers recognized -- and this is probably what makes mentors so uniquely adept at running such programs -- is that everything is constantly evolving. Yes, foundations matter. There's no denying their import. But, to learn how to never stay in exactly the same place is to learn how to better prepare yourself to defend your position, and, at the same time, advance your passions. That matters, too, and accelerators provide the right type of environment where individuals feel inspired to pursue ambitions.

With this shift in values comes a shift in expectations.

What are the expectations of an accelerator? While the details always vary, we would liked to suggest that the core character of these ventures oscillate around a rather universal set of constructs. Mainly, an open-minded willingness to engage with the world -- trying to affect change, where change is needed - while at the same time, overcoming a specific set of challenges that have resisted such interaction in the past. Growth isn't always measured by metrics. And, it's hard to cut a piece from the pie-in-the-sky model when your hands never actually leave the cutting board. Accelerators understand that.

It's also important to point out that most accelerators are, like their namesake, specifically designed to be extremely intense. They are not for everyone, by design, but people should not be discouraged from applying. Primarily, they are built in a rapidly iterative fashion, often with the assistance of those with experience in the chosen field. Which is to say, they're built to steadily inspire through personal mentors, like-minded peers and other latent-to-the-enterprise, networks of support. Perhaps less altruistically, they are also specifically designed to diligently sift through the vast haze of ideas, to find ones truly worthy of that noble pursuit.

With that said, accelerators are often under appreciated in terms of their financial scope. Despite their motivations -- which is a topic for another conversation -- many provide the funds necessary to make a commitment to the program. Not only are recipients rewarded by the encouragement and value a mentor provides, they are also supported by the accelerator, so you can concentrate. What this demonstrates is a vested interest in trying to mature your ideas.

With accelerators, there are no longer any masters, only disciples of collaboration, individuals committed to hard work and happenstance, and the magic that happens when you learn to believe in yourself. If you have the opportunity, we highly recommend that you jump, headfirst, into an accelerator program. You never know what might come of it...