Remember Sandy Hook? That was 1,276 days ago, and since then, 1,209 mass shootings have occurred, according to GunViolence.org.

The latest 50 names on that list are the result of an apparently homophobic/religious extremist unable to cope with reality that people live lives in a way he can't cope with.

No "law" was going to stop him from wanting to do that. No law was going to make it impossible. But there certainly are things that could have made it a whole heck of a lot harder.

But things are the same as they ever were. Our gun laws have not moved at all. And it's time change that.

Here are some other fascinating numbers for you:

From this, we can surmise a few things.

First, if Obama is really trying to "grab your guns" he's doing a pretty piss-poor job of it.

Second, there are a whole lot of guns and a whole lot of shootings. I know correlation doesn't mean causation but hey, maybe having a bunch of guns floating around the country has something to do with all those people getting shot.

And for the most part, the "good guys with guns" are too busy accidentally shooting themselves or other people to help out much with the war on the "bad guys with guns."

So how did we get to bogged down in such stupidity?

Well, for starters, we have the wrong conversation with the wrong people.

Rather than engaging in honest discourse with good faith, the opponents of gun control derail the conversation with strawman arguments about "gun grabbers" and "Second Amendment rights," as though either were even remotely pertinent to the conversation as gun control is neither an attempt at the first nor a violation of the latter.

Gun control -- as the name implies -- is nothing more than a desire to control guns. Namely, who can buy them and what kind they can buy.

The vast majority of Americans agree that, as long as you are a non-violent, sane individual, you have every right to buy a gun. We also generally agree that a violent felon probably shouldn't be walking around with an AR-15 strapped to his back.

If you're one of those sane, reasonable people who is in the great vast chasm of in-between those two extremes, perk up! This is for you.

See, Americans have been duped into thinking that this is a discussion of just the two extremes of the spectrum.

But it's really only established by the tiny minority of paranoid, misinformed, self-deceived, jingoistic, arrogant, obstreperous and contentious group of gun nutters who have somehow determined that they alone are what stands between the U.S. federal government running the country and whoever is running it now.

I'm talking about the kind of "patriot" who thinks he's defending America by terrorizing moms who don't want to see their children killed. 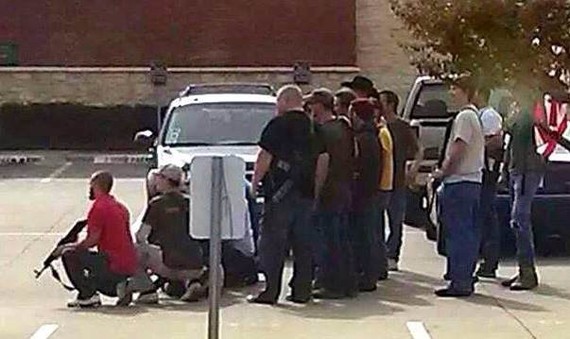 And if you're one of them, and your little feelings are hurted by me saying that, too bad. I don't really care what you think about things because you are in the tiny minority and you should be irrelevant.

But here's the problem: You aren't.

Whenever good and well-meaning people who don't want to "snatch your guns away" try and engage you, we let the discussion get derailed by idiot-speak about how you're going to save us from the day that the "liberals" do whatever they are going to do and then invoke your latest Allen West-inspired lunacy.

So I'm not talking to you, and I'm sure as heck not listening to you.

No, this post is for the sane, rational, thinking people of the nation who are still wondering when something is going to change.

This is for the people who believe the interests of the 100,000 who have died outweigh the fringe, demented and whacko conspiracy theories of the few who are dug into believing that "gun control" means "gun ban."

So if you're planning some sort of "rebuttal" I promise not to read it because I've already refuted it. I've seen the same trite drivel, debunked studies, dishonest statistical arguments based on England or Australia or whatever it is you think you're going to "destroy" me with already. And it didn't get any less mind-numbingly stupid since 100 more people got shot.

Just type in your argument and the word "fact check" into Google. Then go read something that isn't posted on your favorite right-wing, Trump-supporting propaganda page you call "objective journalism."

You're wrong. You just don't know it, and if your mind were open, you would have already changed it. You're not worth my time or energy.

I already know why you're wrong, and I'm done explaining it to people who think reading The Blaze is considered "research."

Our problem isn't really you, though. Because, like I said, you are a tiny and minuscule, albeit obscenely loud and shrill, fraction of the population.

It would be easy to blame Congress. After all, it's Congress that hasn't gotten a lick done. But that would be oversimplifying things.

It's not rocket science here as to why that is. According to OpenSecrets.com, Since Sandy Hook, the NRA has spent almost $13.5 million lobbying Congress. Throw in contributions, and that figure climbs well over $15 million.

Then factor in the almost $30 million in "outside spending" in the 2014 election cycle, plus whatever ungodly figure this year brings, and you're sitting at well over $50 million.

And nothing has gotten done. Nothing.

What does that tell you about what the NRA's goals are?

The NRA has spent well over $50 million to see that nothing changes since -- literally  --  a classroom full of children were murdered.

But I don't really blame the NRA. I mean how much scruples do you expect from a group which endorses the manufacturing and selling of "toys" that children can use to kill people.
The real solution here lies with us. The sane, rational, thinking voters. The NRA can buy your congressman, but they cannot buy your vote.

What is their stance on two things?

This election, make yourself a one-issue voter if you have to. Refuse to vote for anyone in the pocket of the NRA. Change in gun laws won't come until the change in the Congress. And that change won't come until we force it.

CrowdRise has listed a number of ways to help. Donate here or through the widget below.