It's hard to quantify just how many people cheat, but with older estimates ranging from 40 to 76 percent, it's safe to assume there's a lot of infidelity going on. But what's really at the heart of these transgressions?

That's what renowned sexuality and relationships expert Esther Perel discussed in her recent TED Talk, which was released to the public today. She said that people who cheat often believe in monogamy, but they find their values and behavior in conflict when they actually have an affair. That's because cheating isn't necessarily about sex or even a person's partner -- it's about a more complex desire, Perel said. 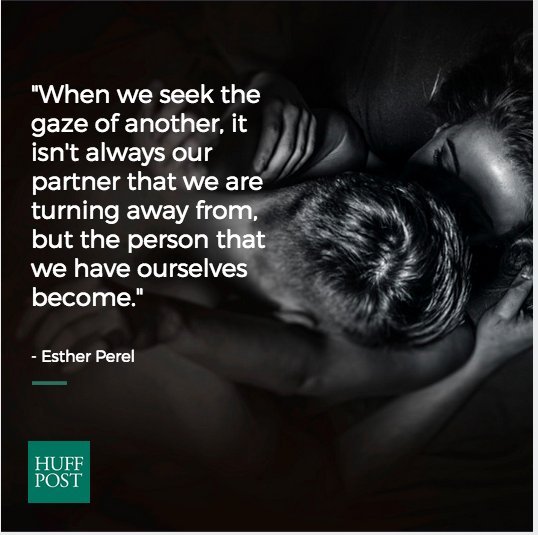 Perel said that many of her clients have cheated after a parent dies or after hearing bad news at the doctor, rather than as a result of problems within their current relationships.

"Death and mortality often live in the shadow of an affair, because they raise the question: Is this it? Is there more? Am I going on for another 25 years like this? Will I ever feel that thing again?" she said. "Perhaps these questions have propelled people to cross the line and some affairs are an attempt to beat back deadness and an antidote to death."

There's often a lot of shame associated with an extramarital affair, particularly for those who've been cheated on. Society may be quick to assume that infidelity is the result of either a bad relationship or a betrayed partner's shortcomings. And if the scorned spouse stays in the relationship after infidelity occurs, they open themselves up to judgement. Simply put, betrayals are complicated.

Ted.com also notes that Perel's talk "unpacks why affairs are so traumatic: because they threaten our emotional security."

Perel's unconventional take on infidelity is not a one-size-fits-all explanation. But, for those couples who do experience infidelity as a result of the restlessness she described above, the affair provides an opportunity to examine what's not working in a relationship and empower them to change those things for the better.

To learn more about non-monogamy, listen to the HuffPost Love + Sex Podcast:


Note: This article and headline have been modified to clarify the message of Perel's Ted Talk.