My husband acted like it was Christmas when he opened the box. He interrupted dinner and everything when the UPS man came with this box. "I have a present for you!" He said. He was smiling and ripping off the tape quickly to give me this gift. They girls stopped eating to help him adding lots of "What is it!" "What did you buy!?"

Jed pulled out a belt-like-strap-thing and said "It's a reflector for you to wear when you run. It's super lightweight and easy to wear, and now you can be seen when you run so early in the morning as I worry about you running in the dark."

But I don't want to be seen.

I want to be a black shadow in the night.

I want to be hidden.

I want to go unnoticed.

I want to go untouched.

Not from cars -- the reason my husband bought the reflector -- but from men.

"You don't want to be seen? I don't get that. Aren't you worried about getting hit?"

No, I'm not afraid of cars.

I run in all black because I don't want to be seen. I take full responsibility for watching out for vehicles and assume they cannot see me, so I give them the right of way -- always -- all five or so of them that I see. I feel safe from cars.

"I don't understand. I'd feel better if you wore a reflector."

Because I have been seen. The time two teenage boys on a scooter saw me. Thought I was maybe a deer -- a shadow -- but they circled back to see. By that time I knew they were headed back my way so I left the pavement and started through yards. They followed me through yards -- trying to hit me with their scooter. Yelling things they were going do to me when they caught me. They were maybe 17 or 18. Maybe had been drinking. Maybe not. Two white boys in polo shirts and nice-looking shorts and expensive tennis shoes -- that's how close they came to me. But when they realized we were now less than a block from the police station and that's where I was heading. they took off.

Or that time that the two young men in a car did spot me and came around again for another look. Yelling "Hey baby -- I'm gonna take a piece of that!" I yelled back "I'm old enough to be your mother!" as I dug out my pepper spray and my phone to call 911. They followed along for one more minute and yelled to me "Yeah, ain't gonna f*ck no mom!" It was too dark to get a picture of their plate before they drove off.

Some people may call me stupid because I run before dawn. That I take too many chances. That I run alone. That I deserve it because I'm purposely putting myself in a potentially bad situation.

And I hate that I have to worry -- because no woman should have to. I like to run when it's dark and cool. I like to run before my family gets up so my running doesn't cut into our busy days.

I should be able to run whenever I want to run and wear a reflector because all I have to worry about are a bunch of cars.

I shouldn't have to carry the pepper spray that my husband also bought for me.

I shouldn't have to worry about a stranger or someone I know attacking me or raping me.

But does it matter what time I go running really? Because a 15-year-old was attacked just a few blocks from our house yesterday in the middle of the afternoon.

I hate that I have to tell my daughters over and over and over to stick together. Always have a buddy. Never walk or bike alone. I HATE that I want them to not be seen. 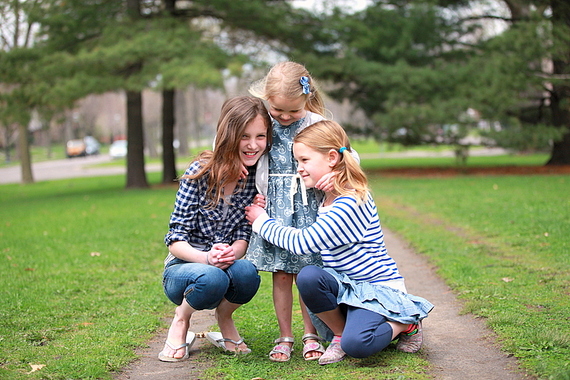 I hate that they have to stay hidden to be safe. Not just from strangers, but boys in their schools and neighborhoods. And no not all boys and men are a threat. But yes, all women have to worry.

And I have to explain to them why men can run at 3:30 a.m. with reflective gear and water, but women run hidden in black with pepper spray, knives and 911 on speed dial.

That we have to live with fear every moment.

And what do we need to do to change that reality.