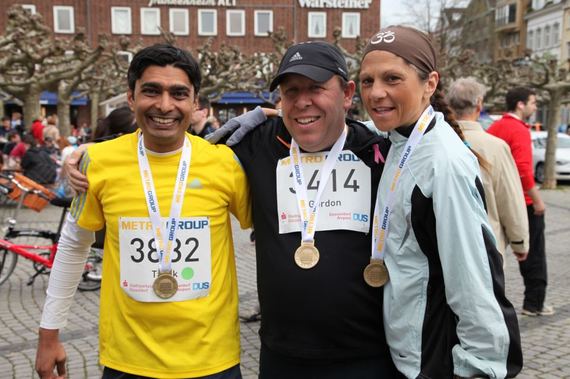 When my friend Kay mentioned that she had to take chemotherapy she became the 7th friend, all women, who were either going through or had just recently gone through this terrible ordeal.

I was gutted. I wanted to do something, but I was not sure what. I just knew wanted to show my support, some solidarity.

I decided I would raise money for cancer charity; it wasn't much, but at least it was something I knew that I could do.

I'd been asked many times, but I always refused, it seemed so hard and so futile. My first urge was to resist. It was going to be tough and to be honest, I still didn't want to run a marathon.

But a voice in my head said, "but what about your friends, they don't want to have cancer or go through chemo-therapy either, so maybe not wanting to do something isn't a good enough reason for not doing it."

Before I committed to doing it I wanted to check with my friends that it was going to be okay, the first person I spoke to was Tanya, she was going through chemo for the third or fourth time, and I wanted to know how she'd feel about it.

When I mentioned it, she said, "I think it's a great idea, I find it so inspiring that you want to do that, I appreciate it."

I didn't bother asking anyone else Tanya's response was enough.

So that was it, it was decided, I was going to run my first marathon and raise money for cancer.

Next thing I did was to post it on Facebook; I wanted to make my commitment public, as it would stop me from backing out. I wrote that 'I commit to running a full marathon within the next 12 months to raise money for cancer charities.'

It didn't take long for the responses to come; many were supportive many said I was crazy, and there were many others who said "it's not going to happen."

But my wife and my best friend Dave both looked at me and said "ok, what can we do to help".

It's probably worth mentioning that I wasn't a runner, I was very much out of shape, and I have never run more than five miles in my life, and even that was over 30 years ago. So this wasn't going to be easy.

Next I searched the internet and found a marathon training plan, and a list of local marathons.

Interestingly the training plan claimed to be able to take you from couch potato to finishing line in just 24 weeks, and the Dusseldorf Marathon was due to be run in 30 weeks time. This seemed like destiny to me, so I quickly signed up, I am strong believer striking while the iron is hot.

My first run was just a simple 15-minute jog, no distance required, just jog as far as you can in 15 minutes. I'd like to tell you it went well but to be honest; I didn't realize just how unfit I was. I nearly collapsed at the end of it, but I had done it, albeit very slowly.

I posted my progress on Facebook; this served two purposes it showed that I was sticking to my commitment, and it allowed me to get positive feedback from my friends who were very supportive.

Not everyone encouraged me. My boss told me I was mad and that this would all end in tears.

As the weeks rolled on, the distances and the times started to increase. I remember when I ran my first half marathon. I did it alone, running in freezing temperatures. When I posted pictures from the run Tanya messaged me and said, "Thank you for doing this, your running motivates me to keep up with my chemotherapy."

It was funny how her bravery motivated me to run, and my running served to motivate her to continue with chemo. It was something I had never imagined, or I would have started to run earlier.

Sadly, Tanya lost her battle with cancer before I got to completed the marathon. I was deeply saddened with her passing, but it inspired me to keep on going.

Running now became my passion, something that I never dreamed would have happened before, and on those cold mornings when it would have made more sense just to roll over and go back to sleep, I chose to get up and run. I wasn't doing it for me any more, in fact, I never had, I was running for those who couldn't run.

When the day of the race finally came, I was nervous but confident. I knew why I was running, and I was determined to finish it. The weather was much warmer than I had experienced before but it wasn't too hot, and nothing was going to stop me from completing the race. I'd already run six half marathons, and I had run 24 miles just four weeks before so I knew I had this in the bag as long as I avoided injury.

I kept my pace steady early and the race just flew by, I passed through the halfway stage in 2 hours 20 and was feeling great, I passed through 20 miles in three and half hours which meant I had over two hours to complete the last six miles, and I knew I could do that even if I walked the rest of the way. Which was good news because by now I was starting to feel the effects of the distance and the weather.

I slowed my pace and walked as much as I ran; I wanted to enjoy it, to savor it, high-fiving the crowd as I ran/walked.

For the last mile, I found a little bit more energy and was able to try to run for the finish line. The sun was shining, and I finally crossed the line in five hours and 12 minutes.

My boss was right, it did end in tears, but not tears of sadness or failure. They were tears of joy. Euphoria for having completed this challenge and for having kept my promise to Tanya.

Since I finished the Dusseldorf Marathon, I have run seven more including Cologne, Vancouver, Athens the original marathon, Miami and Fort Lauderdale, West Palm Beach and Disney each time running for cancer charities, and I plan to run several more.

When people ask me now why I run, I know the answer.

I run for those that can't.