Why is the Solo Traveler the dominant coffee cup lid?: originally appeared on Quora: The best answer to any question. Ask a question, get a great answer. Learn from experts and access insider knowledge. You can follow Quora on Twitter, Facebook, and Google+. 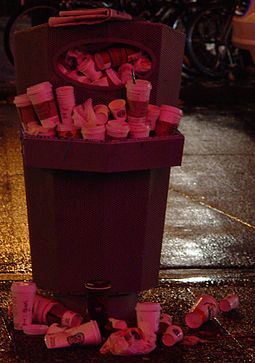 The Solo Traveler lid was designed so perfectly, only slight variations to this outstanding design can be found. This design takes in to account human anatomy, ergonomics and functionality in a simple and elegant way. It is very hard to improve upon this form follows function design. It broadcasts, by its very design, how to use the product, many other lid systems do not. The iconic design has been featured in a number of Modern Art exhibits and has won a number of notable design awards.

There have been at least 40 different, individually-patented drink-through plastic cup lids created since 1934. The styrene plastic hot beverage lid for Styrofoam and cardboard containers have been around since the early 1970s. Prior to this invention, a cardboard cup lid was the only option. The cardboard cup with the cardboard cup lid became an icon in New York and presented two distinct trends Why do delis put coffee in the bag in New York City? and related, the classic Anthora cup and its history What is the origin of the Greek cups from which New Yorkers drink coffee?

The challenge of any directly drinkable lid system is to meet the primary goals:

The secondary goals are:

Click Here for examples of hot beverage lid designs. The Solo Traveler and copies display a clear eas of use functionality. It is easy for most to visually identify the lid systems that seem to work the best.

There are five basic methods and design concepts for lid designs:

Fully Closed -- With this lid the plastic is closed entirely with only a center or side vapor escape hole. To use this lid system the entire lid must be removed.

The Pinch -- With this lid the plastic is scored and to use the section is removed from the edge of the lid to allow beverage be sipped. This is done by applied squeezing pressure to a gripping surface with a thumb and forefinger pinch. The Sweetheart corporation uses this system.

The Puncture -- With this lid there is a raised element on the lid allowing a puncture to so that the beverage can be sipped. Also known as the Push and Drink lid.

The Peel -- With this lid there is a removable wedge in the lid that runs to the edge of the cup fastening system. Radial score lines are used to define a central tear tab with predictable tears leaving the remainder of the lid on the container. The peel-and-lock lid is a vacation on this concept whereby the wedge can be folded back and locked on to the lid with a pressure clamp.

The Pucker -- With this lid there is a raised area that can be access for sipping directly. The drinker places their mouth on the protruded polystyrene. The pucker lid requires the user to drink through the lid and not from the cup like the peel lids. The Solo Traveler is the primary example.

The Problem That The Solo Traveler Solves

There are variations to these designs, however there are not too many other options. Many of these design concepts are confusing and perhaps frustrating to use. Some designs are so poor that even in optimal cases the usability is suspect. Just about everyone has experienced this while trying to negotiate the hot beverage. In many cases spillage and perhaps burns are a result of these poor designs.

In most of these lid designs the user's anatomy, the tip of the nose and the protrusion of the upper lip are not fully addressed. When drinking from a cup the tips of our noses will come so close as to typically enter the cup if there is no lid. Thus with any lid system it is important to address the tip of the nose and the top lip. The Solo Traveler has addressed these issues most directly. And is one of the reasons for the stellar success of the product. The Sweetheart Company has a competing product, the Sweetheart Gourmet lid, however it does not address the anatomy issues directly. On just the ergonomic account alone the Solo Traveler is far more a superior design. This is accomplished by raising the lid surface about 1/2 inch above the edge of the cup. Most completing lid systems sit at or slightly below the edge of the cup and limit how these systems can solve typical lid usability issues.

All disposable lid systems are not fully able to deal with heat transference and steam dispersion very well. The issue is really one of balancing the needs for this class of product. Other than being burned by a beverage that is too hot to drink, the largest complaint seems to be the pooling of steam that can be as hot as 120 F. Almost all lid systems have a small hole to aid in the venting of steam but they are less then ideal as they must also be small enough to not allow too much beverage to escape. There is also the issue of cooling too rapidly to be balanced. In the case of the Solo Traveler there is actually a "Chimney effect" because of the upward angle on the drinking side of the lid. This is both a benefit and a problem. The "Chimney effect" will efficiently move steam up and out through the drinking hole and it is important to avoid drinking until a reasonable period of time has elapsed to allow the early venting as the beverage cools. The benefit is the Solo Traveler will accelerate this process by its design. One could design a system that is optimized for perfect cooling coefficients but this would create far higher costs.

The Improvement: The Solo Traveler Plus

The Solo Traveler's design is so well optimized there is little that can be done to improve the design. However there was one issue Solo could address: complete sealing by the lid to limit any inadvertent leakage. They addressed this with the Solo Traveler Plus lid, designed for Solo by Metaphase Design Group of Saint Louis, Mo. This is a luxury improvement to the classic Traveler lid that includes a sliding closure system. Using the same design firm that created the Microsoft 2.0 Mouse and the plastic Listerine bottle Solo challenged them to create an innovation on the basic concept.

Solo approached the company in the early 2000s to create an updated version of the classic Traveler cup lid. The design premise would be centered around the ability for the lid to be resealed so there would be little to no spillage of potentially hot liquid. This was not an easy problem to design for as cost and ease of use was one of the top priorities.

The solution was to create a two piece lid that has a small sliding knob at the top of the lid. To open or close one would slide the knob and a mechanism inside the lid opens or closes the sip hole. This design was tested at a number of locations and became available in the US in early 2004. It was an instant hit with high end coffee houses and restaurants. It went on to become an award-winning design and shown at museums events. The only issue was the cost, about 7 cents per cup in comparison to 2 cents for most versions of the classic Solo Traveler.

With the Solo Traveler lid we see the crystallization of how many competing design elements have been simultaneously addressed. There is a point of optimization where a product can not really be improved upon and I think we see it with this product. I have used this and a few other products as an example of what any startup company would need to achieve as an ultimate goal. However I also use this as an example of how the misunderstood concept of "disruption" is injuring 100s of startups that are entering into mature markets.

As long as human anatomy does not radically change and cups continue to be the primary delivery system for beverages and gravity continues to work, I think we will continue to see the Solo Traveler on into the foreseeable future.