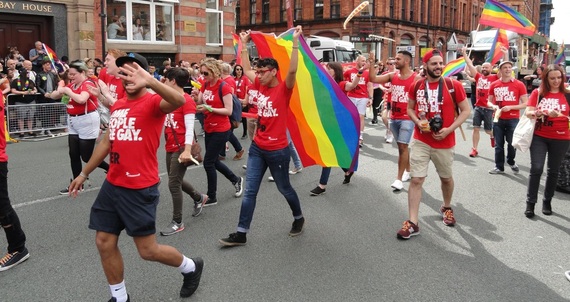 When I came out as gay in 2002 I was 21 years old and equal marriage in the UK was more than a decade away and not really something that people even thought possible. I certainly didn't think that one day I'd be able to legally marry another man; it was inconceivable.

In March 2014 the first same-sex couples married in England, Wales and Scotland and many people felt that the fight for LGBT equality had been won. Same-sex marriage was seen, by many, to be the last legal win that would finally give lesbian, gay and bi people true equality (the UK still has a long way to go until Trans people are equal in the eyes of the law).

The legal landscape in the UK for lesbian, gay and bi people has certainly changed significantly over the past few decades. In 2000 it became legal for gay, lesbian and bi people to serve openly in the armed forces. A year later the age of consent for homosexual sex was lowered to 16, the same as heterosexual sex.

In 2002 same-sex couples were given the right to adopt children - a massive step forward in the legitimation of different types of families. The following year Section 28, the piece of legislation preventing local authorities (and therefore all state schools in England and Wales) from 'promoting homosexuality or the acceptability of homosexuality as a pretended family relationship' was repealed.

It's hard to believe that all of these legal changes happened since the turn of the millennium. It's perfectly acceptable for us to step back and take a moment to acknowledge the distance we've travelled, but to become complacent, as many already have, is a huge mistake.

Anyone looking at the UK's legislation for lesbian, gay and bi equality (as I've already mentioned, trans people are still not treated equally in many aspects of our law) could conclude that there's nothing left to fight for. They'd be wrong.

In a 2016 poll carried out by Pride in London, 59 percent of LGBT+ respondents said that they had felt threatened by other people's attitudes and behaviours towards them. In the same survey 41 percent of gay men said they'd think twice about holding their partner's hand in a public place. These findings show that although a legal level playing field is clear progress, on its own it's simply not enough.

In 2015, Stonewall (the UK's biggest LGBT equality charity) published their Unhealthy Attitudes report. Based on research carried out by YouGov, it found that one in ten staff directly involved in patient care in the health and social care sector had 'witnessed colleagues express the belief that someone can be 'cured' of being lesbian, gay or bisexual'. The same report found that 25 percent of all staff questioned had never received any training on equality and diversity. It's important for patients to feel comfortable when talking to care providers and sometimes that means having to be open about our sexual orientation and gender identity.

When we look at the experiences of young LGBT people the reality is even more sobering.

In research carried out by YouGov for Stonewall in 2014, 56 percent of primary school teachers said that they hadn't addressed different families in ways that include same-sex parents in the classroom. 36 percent of secondary school teachers had heard homophobic language, or negative remarks about lesbian, gay and bi people, from other staff members.

It's important that we recognise the great strides we've made in the UK when it comes to how LGBT people are treated, but the fight for true equality is yet to be won.

More schools than ever are now realising that it's important for their staff to be trained on how to challenge homophobia in the classroom effectively and to create safe spaces for their LGBT students. Workplaces throughout the UK are more confident celebrating their diverse workforces and many are working hard to ensure their policies are truly inclusive and supportive of their LGBT staff. But it's not just up to teachers and employers - we can all do our bit to create a society where lesbian, gay, bi and trans people feel safer and happier in their lives.

It's important that we report LGBT (and all other types of) hate crime when we witness it. Parents can ask their childrens' schools to sign up to programmes like Stonewall School Champions. We can all challenge colleagues and friends when we hear them use phrases such as 'that's so gay'.

The most important thing that we can all do is to continue to educate ourselves about the ongoing fight for LGBT equality, here and around the world and never become complacent.