Earlier this year, a new law -- The Child Performers Protection Act of 2015 -- was proposed to Congress, which, if approved, will grant underage models necessary protections in the workplace. This is revolutionary in an industry that is so averse to changing its ways, an industry that up until now has adopted so few rules regarding the treatment of its workers. For models, there exist no wage regulations, no transparent accounting practices, no insurance or benefits of any kind, no job security, no on-the-job-conduct policy. Meaning: Behavior that in any other work setting is considered inappropriate (or worse, harassment), in the modeling world becomes acceptable.

But, a model doesn't suddenly become immune to these issues when she turns 18, the age at which this new law would cease to be enforced. No, these are systemic problems within the fashion environment that persist throughout a model's career.

16, I was scouted by one of the world's top modeling agencies. Plucked from my sheltered suburban existence, I moved to New York at 17, one month after high school graduation leaving my stuffed animal collection behind. My career, unexpectedly, lasted for almost two decades, ending in January 2015 with a voicemail from my New York-based agency: It's time we part professional ways. The equivalent of getting dumped by a text.

I had a notable career, however, landing several national and international beauty and fashion campaigns, over 20 magazine covers, a handful of TV commercials and even a larger-than-life Times Square billboard; the job afforded me a comfortable, yet modest, lifestyle, and paid for two university degrees. So no, I'm not complaining. Just pointing out that being older than 18 doesn't eliminate the chance of being mistreated within the industry: 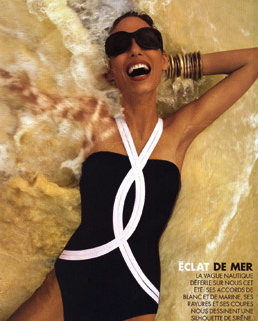 At 24, I did a shoot in Jamaica (I know, poor me) that had me posing on the beach at the point where the surf meets the land, from morning to sundown. 4 days later, the resort doctor removed a tiny pyramid of sand from each of my ears. My hearing has never been the same. At 27, after going through the necessary casting and booking procedure for a job, after making the 20-plus-hour trip to a remote location in Brazil, upon arrival, I was sent home immediately. No explanation given. A dye-job gone wrong for a shoot when I was 30 left me with half a head less of hair after the strands fell out, in large clumps, due to damage. A scene from a horror film every time I showered, leaving me without a booking (read: income) for the next six months. At 31, I was spit in the face on-set by a designer, who, afterwards, refused to pay me the contractually agreed upon amount for the shoot. And, instead of standing up for me, my agency simply dropped me. Via email. 32, I lost a $40,000 a year regular client (my only regular client at the time) -- because of an avoidable mistake my agent made without consulting me.

While these above instances are unique to my career, I know that most models have experienced something similar: Situations in which they were entirely powerless, with no one to turn to for support. Plus, I cannot list the number of times I've had to manage a too-handsy photographer, deflect overly inappropriate comments or fight to get my worked-for paycheck.

And I get it. People don't want to hear the complaints of groups believed to be more fortunate. Especially models: young, beautiful things, seemingly getting paid sacks of cash to travel the world, wear beautiful clothes and hang out with friends who are also, young, beautiful things. People don't want the illusion shattered. And yes, most people don't know a model, those Amazonian-statured, symmetrical-featured freaks. To most, these girls exist only as silent and inanimate objects. But consider that these girls are all someone's daughters.

How is it possible that this very visible and pervasive industry not only exists but thrives with no set regulations dictating the behavior of those who work within it or protecting those involved? An industry supported by scores of consumers, many oblivious to its inner workings.

Not all modeling jobs are nightmares; some are enjoyable, collaborative projects. And while many in the industry are professionals, others absolutely abuse their positions for personal gain, taking advantage of the girls who they know are helpless. Girls (and women) who understand they are disposable, replaceable by a never-ending stream of younger, newer models on a conveyor belt.

So young when I started, I soon learned that to speak up meant to be difficult, which meant to be un-hirable. Starry-eyed and impressionable, I did as I was told. And, as in any dysfunctional relationship, the aggressor uses manipulation to suppress his subject, so, over time, I came to believe that there was nothing else -- aside from modeling -- that I could do, that no one else would have me. (The absurdity of which I realize now, but only after leaving the profession.) Sadly, I believe this is what much of the modeling industry counts on: women so willing, they will do whatever it takes to succeed, to keep their job.

Maybe, however, if this new law does pass, girls will embark on their careers with something I lacked: a sense of being in control, of feeling protected. And maybe they will carry this attitude with them after they turn 18, empowering them to speak up when something feels wrong or goes awry. Instead of keeping silent.

Or, maybe, those in charge -- agencies, clients, photographers -- will simply stop working with girls who are under 18. Now, with this new law, it's just too much of a hassle.