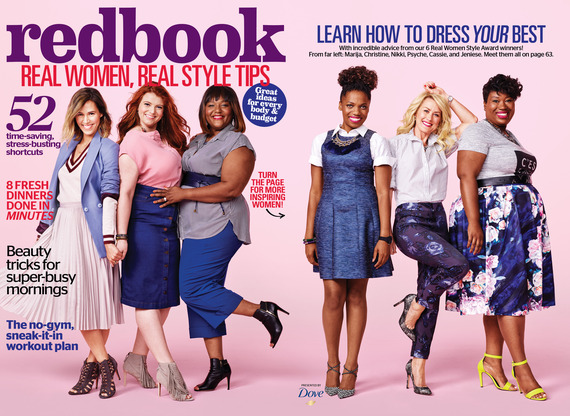 There's been a lot of talk, lately, about real women. As much as we love to hear that stars are just like the rest of us (they use shopping carts at the grocery store! they fill their cars with gas!) nobody sincerely believes we all have that much in common. We're aching to see relatable, familiar kinds of bodies and faces reflected back at us from the media, an antidote to the almost alien-like perfection of celebrities and supermodels. Smart brands have known this for years: Dove began using real women in their ads back way in 2004, and Lane Bryant got some well-deserved love this year for featuring curvy models in their Cacique lingerie #ImNoAngel campaign. There's something so satisfying about feeling a ping of recognition when you see a "real person" in a magazine or on whatever screen you've got in front of you. It's empowering. And frankly, it's a relief.

If you look for Redbook at the newsstand next week, chances are you won't recognize a single one of the six women on it. September marks our second annual Real Women Style Awards, and we put the winners right there on the cover. I love what the issue stands for--that great style doesn't depend on the size of your dress or your bank account--and I particularly love that we're running it in September, the month when fashion magazines spotlight the most well-known celebrities and fill their pages with looks from the designer runways. I spent most of my career at those magazines (Harper's Bazaar, W, the late and lamented Lucky), and I love them. But let's be clear: For the vast majority of us--with jobs and busy lives and budgets--those magazines are fantasy, pure and simple. Style that can live in the real world is far more interesting to me. Women from coast to coast regularly throw together incredible outfits that aren't crazy-expensive and that ingeniously flatter their bodies, whether they be petite or gorgeously full-figured. Our Real Women Style Award winners range in age from their mid-twenties to their mid-forties, come from all over the country (Dallas, St. Louis, Birmingham, Chicago...), and they include a pixie-ish size 4 and a beyond-sexy size 14 and a chic-as-can-be size 22. Each one of them has brilliant, tried-and-tested styling advice. It's impossible not to come away from the issue feeling energized to go out and try something new, which is the whole point of fashion to begin with.

The media spends a lot of time pretending to celebrate diversity, sending up a self-congratulatory cheer whenever a magazine puts someone who isn't pin-thin on a cover. It's a step in the right direction, but it's awfully small. I, for one, don't want to believe that it only takes a famous face or a million-dollar wardrobe or a size-zero body to sell magazines. I know how much Redbook's readers love seeing women who look like them in the magazine; it's part of the reason that we put so many real people on our pages. Frankly, it's far easier to believe that a hairstyle or an outfit or a makeup trick actually works when you see it on someone you can relate to. So why shouldn't that extend to the cover itself?

When the Taylor Swift/Nicki Minaj kerfuffle happened a couple weeks ago, Minaj said this: "We can't have only one type of body being glorified in the media, because it just makes girls even more insecure." That is 100% true, and not just for girls--women of all ages have a right to see a diverse community reflected back at them. I think the women on our September cover are every bit as stunning as any actress or singer or model. They're not just beautiful because of the way they look, they're beautiful because they're confident. They embrace who they are, no apologies. And they deserve their space on the newsstand next to the Rihannas and Kim Kardashians of the world.

Do I hope this issue sells gangbusters? Well, of course I do. But for me, the most gratifying thing is being able to give real women a place to shine. Because look around you--they are shining everywhere.