After the two sides had been nearly equal for most of the day at the Battle of Waterloo, Napoleon ordered his elite Imperial Guard to charge, and, shortly afterward, the French front abruptly collapsed, with a completeness that was unprecedented on any side in the Napoleonic Wars and perhaps in the preceding centuries. According to several witnesses, cries of "Sauve qui peut!" ("Save yourself who can.") went through the French army. For those who believed that some sort of Providence was revealed through history, the dramatic end seemed to signal a turning point, whether it offered a prosperous future or tragic grandeur. The 200th anniversary of the Battle of Waterloo is to be commemorated on June 18th. The remembrances are mostly a matter of nostalgia, focusing on pageantry, uniforms, ceremony, and theater, as well as on small details of the conflict. We are so far from the period that today just about everyone can find something to be wistful about.

There will be a reenactment of the battle, perhaps more elaborate than any such display before, but we should not let a magnificent spectacle distract us from asking probing questions. Why did the French front disintegrate in such an unparalleled way? The charge of the Imperial Guard was clearly a fiasco, but there have been plenty of other disastrous assaults in history, such as Pickett's Charge at Gettysburg in the American Civil War or the English Charge of the Light Brigade at the Battle of Balaclava in the Crimean War. Neither of those was followed by a breakdown of dsicipline similar to that of the French at Waterloo. The explanation must be, at least in part, because, after over a decade and a half of fighting for abstractions such as "glory" (which seemed increasingly hollow amid repeated scenes of carnage), the soldiers were bone-weary.

Not since the Thirty Years War (1618-1648) had a Continental army battled continuously for so long a time, and soldiers of the early seventeenth century were notorious for flouting the wishes of their officers. Napoleon's men had fought two intense yet indecisive battles on the previous day, and broke down under the accumulation of psychological and physical stress. Historians have at times claimed that an army of seasoned veterans was an advantage for Napoleon at the start of the Battle of Waterloo, but it may have been a fatal handicap instead. Many, including commanders such as Marshal Ney and even Napoleon himself, were probably far more traumatized, and more erratic, than anybody realized at the time. A warning precedent, albeit an ironic one, was how the army had deserted Louis XVIII for Napoleon a few months before. They were, to put it bluntly, sick and tired of the very things that people are commemorating now.

But the victors at Waterloo, Wellington very much included, had good reason to retain a legend of Napoleon, since the presence of a formidable adversary added to their achievement. A knight errant, after all, requires a dragon to slay. As a result, the reality of the battle was concealed by propaganda from both parties. People can become nostalgic about anything, including the eras of brutal conflicts, plagues, natural catastrophes, and ruthless dictatorships. They need only remember very selectively and then find, or else imagine, some redeeming quality such as solidarity or the opportunity for heroism. War, especially, blends experience and fantasy in the most seductive way, by means of decorations, costumes, songs, rituals, and colorful tales. When wars are in progress, people wish fervently for them to end, but, when they are over, people look back at them with a paradoxical affection. There cannot be much harm in wishing the days of Waterloo were back, since that can never come about, but we should try not to lose perspective. Let us, then, indulge ourselves by "remembering" Waterloo for a week, but then then forget it in the years to come. 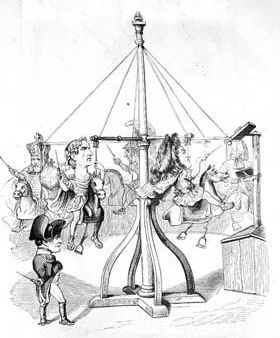 Cartoon by J. J. Grandville, 1844. Generals of the past are shown as little boys taking rides at an amusement park. Alexander, Caesar, Charlemange, Louis XIV, and Marshal de Saxe have their turns, while Napoleon impatiently waits for his.