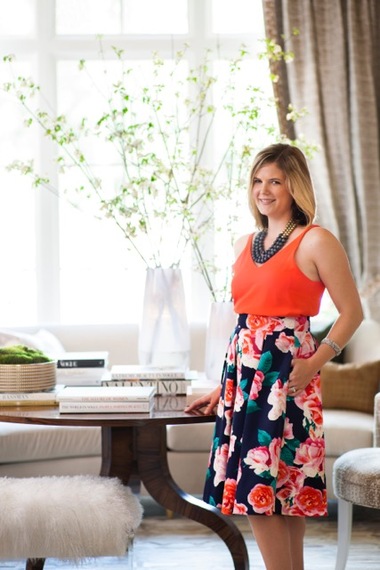 Atlanta Homes & Lifestyles Editor-in-Chief Elizabeth Ralls is a 13-year magazine-industry veteran who has covered the shelter category in the Southeast since she began her career with Southern Accents magazine. The region's leading design publication since 1983, Atlanta Homes & Lifestyles is published monthly, and Ralls has been at its helm for the past three years, where she has spearheaded an overhaul of the magazine's website and digital platforms as well as debuted a new showhouse platform dedicated to exhibiting the work of the region's most accomplished design talents with the Southeastern Designer Showhouse & Gardens, which launched in Buckhead earlier this spring. Raised in the Midwest and schooled in the Northeast, Ralls has spent the last 10 years in Atlanta, where she and her family of 5 have planted firm roots.

How has your life experience made you the leader you are today?
I've always been independent (I'm the youngest of three children), and, as a former Division One athlete, pretty competitive. Those two qualities, however, enabled me to take major risks early on in my career--moving to Birmingham and, later, Atlanta--that ultimately paid major dividends. Moving to cities where I knew very few people forced me out of my comfort zone, and I think you can't be successful until you dare to take chances.

How has your previous employment experience aided your tenure at Atlanta Homes & Lifestyles?
I still keep in touch with, or follow the work of, some of the amazing writers, editors, stylists and photographers I encountered during the first three years of my career, which I spent with Southern Progress Company in Birmingham, AL. Those connections helped keep me working during the recession, or were instrumental in making new and vital introductions through the years. I also think that being self-employed as a freelance writer, editor and content author, prior to being hired as Editor-in-Chief of Atlanta Homes & Lifestyles has, in hindsight, proved highly beneficial in many facets of running a magazine. Because we are a small staff, we rely on a handful of passionate independent contractors to photograph and write a large portion of the magazine each month, so being fair about compensation is a huge priority--something I would have appreciated as a hardworking freelancer.

What have the highlights and challenges been during your tenure at Atlanta Homes & Lifestyles?
I think initially, my biggest challenge was overcoming the "big-shoes-to-fill" mentality, and acquiring the confidence to forge my own path. A major highlight of 2016 was launching a new franchise, the Southeastern Designer Showhouse & Gardens, which was hugely successful in terms of the level of talent participating as well as visitor traffic. One of our biggest challenges moving forward is to harness our redesigned website into a revenue generating machine, and determining whether or not its future includes digital-age buzzwords like affiliate marketing and sponsored content.

What advice can you offer to women who want a career in your industry?
The publishing industry has changed immensely in the 13 years since I began my career, when duties were very much divided and there was little crossover between disciplines. To be an exceptional candidate in the magazine industry today, you must be a Renaissance woman...have a knack for styling (whether for Instagram or a photo shoot), a working knowledge of Photoshop and graphic design, killer social-media prowess and SEO savvy. And that's in addition a love for the written word, copy-editing mastery and a thorough understanding of AP style!

What is the most important lesson you've learned in your career to date?
I have always loved staying busy, and I honestly don't think I would have gotten nearly as far in my career without learning to ask my superiors "what else can I do?" I'll never forget the look my first supervisor gave me when I asked her that as an intern. (She, in turn, helped me land my first job.) That phrase is catnip in any industry, and I wish I heard that question more often.

How do you maintain a work/life balance?
As women of a certain generation, we've been told that we can have it all--a career, a family, and the time to cultivate both--but it's much trickier than that. Because I work in an industry where there's a can't-miss event or trade show around every corner, finding balance is all about prioritizing what's important and seizing the moment, and that varies by the week, if not the day. (As a working mom, it's quite easy put yourself at the bottom of the priority list, and that's something I'm actively working to counteract!) When school is in session, obsessive organization and communication keeps our family sane; at the same token, capitalizing on those rare moments of downtime is also key. There's nothing better than a Sunday afternoon bike ride with the whole family, a surprise evening by the pool, or the solitude of a long walk or quality time spent with a spouse or good friend.

What do you think is the biggest issue for women in the workplace?
Maternity leave. I know I personally felt like I could not delegate my responsibilities to anyone while I took what amounted to a very short leave with my youngest child. Many women feel like their company loyalty is called into question if they take a longer leave, while for others, the negligible amount of time allotted for leave seems to set working moms up for failure. There seems to be a "damned if you do, damned if you don't" mentality--just look at what happened with Yahoo CEO Marissa Mayer. And that's just in corporate America. There are countless self-employed female entrepreneurs who face the risk of losing clients completely when they take time off.

How has mentorship made a difference in your professional and personal life?
I've been fortunate to work beneath, and learn a great deal from, two amazing journalistic powerhouses, Clinton Smith, former Editor-in-Chief of Atlanta Homes & Lifestyles, and Karen Carroll, former Editor-in-Chief of Southern Accents. Clinton's unerring eye for style and willingness to take risks was an eye-opener for me. He also allowed me the freedom to explore my creative side, from concept to production. Karen's strong management style and eye for detail still inform my idea of great bosses leading by example.

Which other female leaders do you admire and why?
Covering the shelter industry has allowed me the amazing opportunity to interact with so many successful women, and it's been a huge highlight of my career to glean tangible inspiration from them. I have great respect for Anna Brockway of Chairish.com, since she not only altered the landscape of consignment in the online marketplace, but is also super-mom to four children. In Atlanta, Helen Ballard, founder of Ballard Designs, and Lisa Newsom, founder of Veranda magazine, are not just genuine and gracious individuals but also brilliant businesswomen who turned the tide of the catalog industry and the publishing industry, respectively--all out of love for their homes, and bringing great design to the masses. On a larger level, Spanx founder Sara Blakely. She's built an empire and is 100% honest about how failure can actually be a secret to success. Women can be such perfectionists; open conversations about transforming setbacks into a positive outcome are hugely beneficial to women of all ages.

What do you want Atlanta Homes & Lifestyles to accomplish in the next year?
From a print perspective, my goal is to include more designers from across the Southeast, which makes sense after the launch of our inaugural Southeastern Designer Showhouse & Gardens this past spring. So many other Southern cities simply don't have the platform in their markets to properly showcase (and show off) their amazing projects. We'll never lose our love affair with our Atlanta designers, but we're also exploring opportunities to branch out. On the digital side, we're working looking to create more synergy from a social standpoint with both our editorial content and our signature events, like Showhouses. We'll delve into Facebook Live with a reveal for September's Serenbe Showhouse and also explore a video series in conjunction with a new column we have planned for our 2017 print issues.