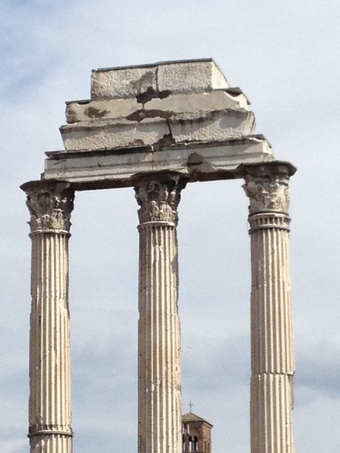 I can speak Latin. Yes, this infamous dead language is still very much alive, and nowhere more so than in the halls of private schools. So when can you use Latin if you can't speak it to anyone (which is actually a common myth -- more on that later)? The answer is everywhere. For instance:

You can impress people by speaking an ancient language that very few people understand. Not only are you part of the unique, 1% of the world who can actually speaks Latin (which makes any person very unique) but trust me, if you want to be able to gossip without absolutely anyone understanding- Latin is your best pal.

...but yes Italians will still understand you. Think no one speaks Latin? You're wrong, there are still Latin speaking clubs and organizations around the world. And also in Italy, but don't speak Italian (mamma mia!)? Try speaking Latin. They might laugh at you, and look at you like you're crazy, but 9/10 times they will understand what you're saying.

You know the basis to all the romance languages. Tons of languages borrow from Latin and can be used to quickly learn another language. For example, library. In Latin it's bibliotheca. In French it's bibliothèque. In Spanish and Italian it's biblioteca. Easy enough.

The pope! Yes, the pope can speak Latin. Not only is it the official language of the Holy See, but in this digital age, it also is used for Twitter. Yup, the Pope has a special Latin twitter account for the Latinists of the world. Follow him here(https://twitter.com/pontifex_ln)

So yes, I may speak a 'dead' language -although in my opinion, Latin is still very much alive- but do you know what the origin of the patella (aka the kneecap)? I didn't think so.