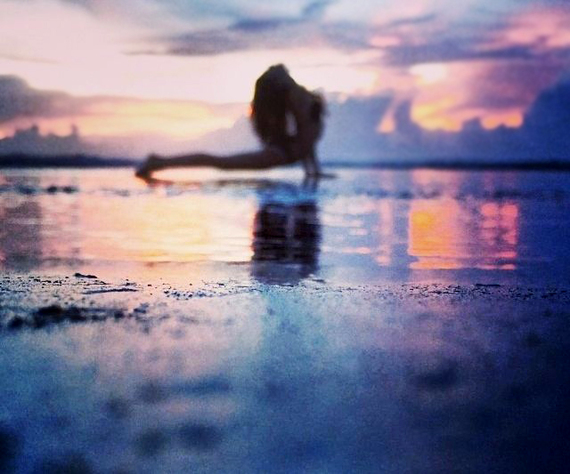 What happens when over 3,000 yoga practitioners converge in the middle of the high desert to celebrate four days of yoga, kirtan, and music? Bhakti Fest 2014.

Marking its 6th year, Bhakti Fest is nothing short of a small village built on the hot desert sands in Joshua Tree. Three yoga halls and a series of buildings, tents, teepees, stages and shops cover several acres of desert anchored by an organic vegetarian food court in the center. The festival plays host to around-the-clock yoga classes, healing workshops, chanting sessions and mindfulness discussions led by over 90 teachers and trailblazers of the Western yoga movement including Dharma Mittra, Shiva Rae, Govind Das and Radha, Saul David Raye, Erika Burkhart, Sianna Sherman, Raghunath, and Tymi Howard to name a few. Even though many of these teachers sound like they're of Indian descent, none of them are actually Indian, yet they've certainly embraced the ancient Hindu knowledge and tradition and adapted their yoga teachings and classes so they may appeal to the Western mindset. 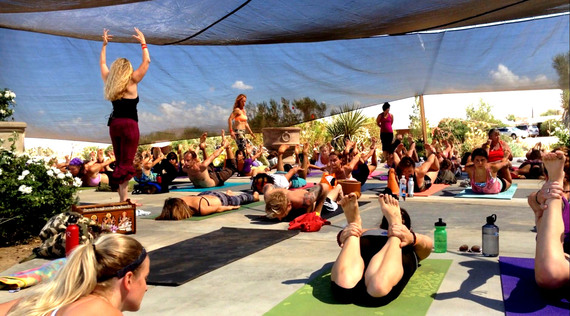 However, these are not your ordinary yoga classes. In one session, I watched 75-year-old Dharma Mittra somersault himself directly into a headstand. In other classes, the instructors were accompanied by live musicians and incorporated various forms of singing and chanting, making the class more of a multi-sensory experience than just another kick-your-asana workout. With close to 50 musical groups and kirtan artists on the grounds, many of them would play live for yoga classes during the day and then grace the main stage at night. Some of these main stage artists include Matisyahu, Krishna Das, Jai Uttal, Girish, MC Yogi and Donna DeLory, who left a lucrative pop career touring with Madonna for 20 years to focus on creating her own kirtan chanting music albums. 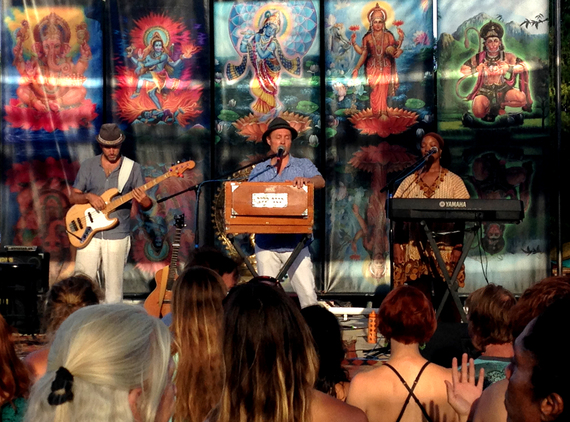 However, Bhaktifest is a microcosm of a much larger movement taking place across the U.S. What started out as a private practice in the garage over 100 years ago has now evolved into a $27 billion industry with over 18 million practitioners in the U.S., of which over 70 percent are women. Over 40 percent of these practitioners earn more than $75K per year and over 70 percent are college graduates. It's clear that as yoga continues to blossom in the West, it is attracting a highly professional and educated group looking for more productive and healthier ways to reduce stress while maintaining their fast-paced Western lifestyle.

As the health crisis in this country continues to grow, and chronic diseases permeate deeper into our society, more people are seeking out alternative health care professionals and incorporating yoga as part of a holistic approach to treat a variety of ailments ranging from back pains, diabetes, and IBD to arthritis, autoimmune diseases and even skin disorders. National Ayurvedic Medical Association (NAMA) board member and Ayurvedic counselor Kristen Schneider says, "In today's stress driven society, women who have a routine yoga and meditation practice coupled with the right diet for their dosha type, can much more easily build up their prana (life force) and ojas (healing force) allowing their body to rejuvenate quickly and age much more gracefully."

Personally, I found myself doing around 6 hours of yoga classes per day for 4 consecutive days, fueled only by kitchari (rice and lentils), ghee (clarified butter) and other vegan dishes, and I never felt stronger. 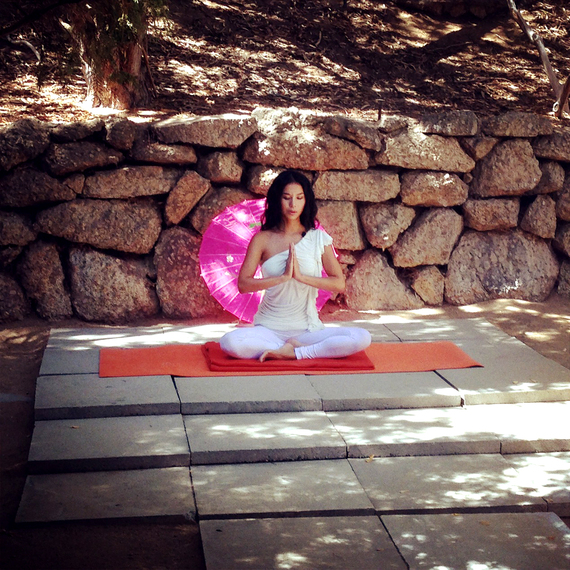 Yoga is also spreading into other areas of our Western culture. Numerous K-12 schools across the country are beginning to introduce yoga into their PE (physical education) classes. Some schools have taken it a step further and have their students start their days with 15 minutes of yoga and guided meditation exercises to help them emotionally calibrate and prepare themselves for the day ahead. Loyola Marymount University (LMU) has recently created the first Masters of Arts in Yoga Studies program via their Integrative Health department to take a deeper dive into the history, philosophy, and health benefits of yoga. Even tech giants like Google offer mindfulness and meditation courses (which are oversubscribed) to help their employees gain more self-awareness and tap into their creativity.

Yoga and the Vedic sciences have also been referenced by various areas of the scientific community. When Swami Vivekananda first introduced yoga to the west in 1893, he worked with Nikola Tesla to help find a common understanding between the ancient eastern Vedic sciences and Western physics. Tesla agreed that there was certainly a correlation between the two perspectives and concluded, "All perceptible matter comes from a primary substance, or tenuity beyond conception, filling all space, the akasha or luminiferous ether, which is acted upon by the life giving Prana or creative force, calling into existence, in never-ending cycles, all things and phenomena."

However, it wasn't until Einstein came along with E=mc^2 that Western science could prove matter and energy are interchangeable, which is what the Vedic scriptures described over 5,000 years ago (i.e. all physical matter is made up of potential energy). Even Danish physicist Niels Bohr who won the Nobel Prize in Physics for how electrons behave within the atom said, "If quantum mechanics hasn't profoundly shocked you, you haven't understood it yet. Everything we call real is made of things that cannot be regarded as real." 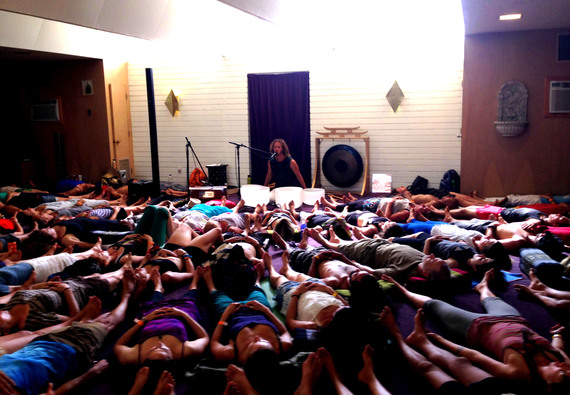 Whether it's spirituality, music, health, education, science or some other facet of society, it's clear that yoga and the Indian culture continue to deepen their roots in America. The question whether mainstreaming yoga will allow it to retain its authenticity and deeper purpose of self-discovery remains to be seen. However, Bhakti Fest founder and Western yoga pioneer, Sridar Silberfein, is optimistic, "The goal of Bhakti Fest, yoga and meditation is to give people an experience of why we're here. To reconnect with the love that resides inside our hearts, and to remind us this love still exists."

professor of innovation and entrepreneurship; author of 'The Inventor: The Story of Tesla'