Baseball was always my first love. I'd fall asleep at night listening to a scratchy broadcast of my beloved Kansas City Royals.

I modeled my left-handed swing after George Brett. Every summer was filled with as many baseball games as my parents would let me play.

Eventually, I became pretty good. Not MLB draft-worthy good, but a solid player. All state in high school. A couple scholarship offers from smaller colleges. That sort of thing.

Fast-forward several years, and I have a son of my own now (he's one of five children we have -- the other four are girls).

He's almost 5 and has one season of t-ball under his belt. I helped a bit as a coach. 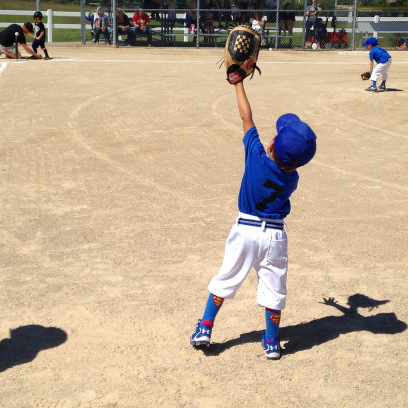 The selfish part of me wants Silas to be the best player on the team. To crush every ball like Bo Jackson. To field grounders like Frank White. To run like Willie Wilson.

He may very well turn out to be a stud. But there's a strong likelihood he won't.

During one of his first games last season, one of our players hit a ground ball back to the pitcher. The bases were loaded, so the little boy appropriately threw the ball home to try and force an out and prevent a run.

The throw came in pretty fast. And pretty low. It hit the catcher in the shin, and he immediately began to cry. Not a crazy, over-the-top cry, but a cry nonetheless.

Before our next batter even had time to get to the plate, the little boy's dad came storming up to the catcher (he is also a coach and was near second base helping the infielders). In front of both teams and the parents in attendance, he was pointing directly at his son.

Clearly embarrassed that his boy was crying (keep in mind, the boy was 4 years old), he told his son to "suck it up."

Quit crying. Rub some dirt on it. You're being a wuss. That was basically his advice.

His hurt shin wasn't addressed and neither was his hurt pride.

It's easy for me to point fingers right back at this dad, but in my ugly moments, I'm not any better. I want my son to be tough, to be awesome at sports, to have a bunch of friends, to not make me look bad. The list could go on forever.

But I'm learning that my son needs a guide, a role model, a leader. And I don't believe leading my son should lead me to yell at him for being hurt.

My emotions look different than that 4-year-old boy's, but as a 34-year-old boy, life isn't always picture-perfect. It is hard, confusing, disappointing at times.

When it knocks me down, I don't need someone to tell me to simply suck it up. I need someone to come alongside me, brush me off and tell me "nice try, let's get em next time."

How amazing would this have been?

If instead of pointing a finger at his boy, that dad got down, looked in his eyes and said, "Son, I know that hurts like crazy. I'm sorry. Cry for a minute into my shoulder if you need to. But I'm proud of you for standing in there and taking that ball on your shin. I love watching you play, son. Get back in there and go get em."

Dads, your words are strong. Powerful. And lasting. It's fine to want your son to be strong, tough and really good at baseball.

But not at the price of cutting him down and breaking his spirit.

Give your son a hug instead of an earful today. I'd love to hear how it goes.