"Whatever it is that you love, that's what you gotta do." -- Zakk Wylde 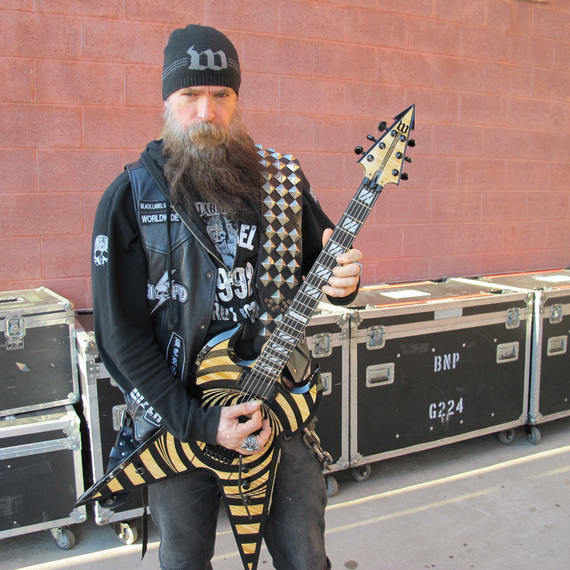 JL: Walk me through the career of Zakk Wylde the guitar player in three pivotal moments.

ZW: Well, I know how J.D. (Black Label Society band member John DeServio) would sum up my career: Why, how, and when is this nightmare gonna end! (laughing). Why, how, and somebody please make it stop (laughing)! Obviously, my biggest moment was meeting Ozzy, and then Oz giving me the opportunity -- I wouldn't be talkin' to you right now if it wasn't for 'The Boss', you know what I mean? He afforded me this amazing life that I have -- being able to play music and make the records that I wanna make. I've never had anyone tell me, we gotta wear these kinds of clothes, we gotta wear eyeliner -- I've never had that. Let's be real: If me and you owned a record company, why would we do that to any of our bands anyways?

JL: You're getting ready to release your newest solo CD, Book of Shadows II. Similar to your first release Book of Shadows back in 1996, this music acts as bookends to your heavier Black Label Society stuff. Were you trying to reach a different audience with a softer and more melodic approach, or is it a way for you to cleanse your metal palette?

ZW: The whole point of the record was, why 20 years? Guns N' Roses' Chinese Democracy took 15 years to make. We always have the mellow stuff lying around but the fact that it was the 20-year anniversary -- I didn't even think about it because we are always constantly touring all the time and making records anyways, so I don't have enough time to just sit around and think about it. We've been touring behind Catacombs of the Black Vatican for the last two years doin' the heavy stuff, and then we did a short run called Unblackened, from New York to L.A., and you know, it just felt nice doin' the mellow stuff and takin' a break from the heavy stuff for a little while. Whatever chapter we're rollin' with, whether it's the New Zealand chapter, Canadian chapter, the Boston chapter, or the London chapter, they'd be like, "Bro, you ever gonna make another one of those mellow records, like Book of Shadows?" It's a good road trip record. I'd be like, yeah in between world peace, cleaning the dog run, splitting the atom, coming up with a cure for the common cold -- I'll see if I can fit it in between brunch. 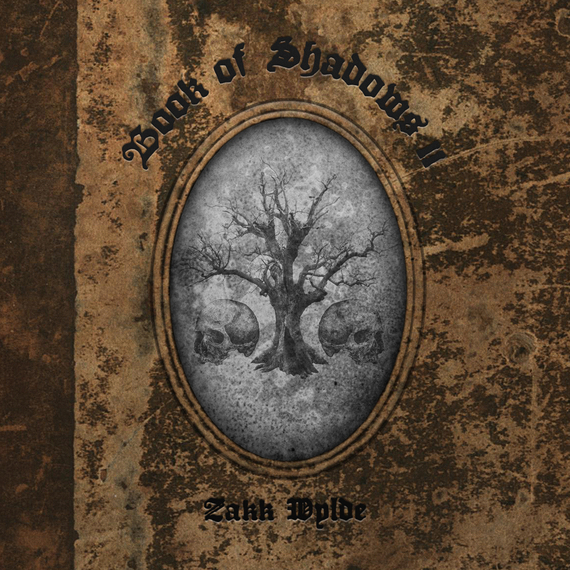 JL: Describe for me the most personal song on this new CD.

ZW: To me, they all are. They are either incidents that have happened to me or someone I know. The lyrics all have to have depth or weight to them. I might get an idea from seeing a movie or an autobiography and see certain lines and be like, that would make a great title for a song, and that would inspire me and I would figure out what I want to sing about and then go about it that way. I have just as much fun coming up with the lyrics, as I do with the music, then sittin' down and composing the guitar solos.

JL: Did you spend more time writing songs at the piano or on your acoustic guitar for Book of Shadows II?

ZW: Either or. Different instruments definitely put you in a different frame of mind, for sure. When you are sittin' behind a piano, you want to write more like Neal Young or Elton John, or The Rolling Stones -- like a 'Wild Horses'-type thing -- and the same thing with an acoustic guitar. But when you're crankin' through a stack of amps, you're thinking riffs -- it puts me in a mindset like a Led Zeppelin, or Black Sabbath-type thing.

JL: Many guitar companies create signature models for their well-known clients like yourself. But you kicked it up a notch by starting your own brand: Wylde Audio. I know you have said in previous interviews that you felt it was a "natural progression" to do something like this. How long had you been thinking about doing your own thing?

ZW: You know, I was perfectly happy everywhere I was at. All the companies that I was with -- Gibson, Epiphone, Marshall, and Dunlop will always be family to me. I love everybody that's over there. I couldn't have ask to be treated any better anyways -- not only did I endorse their stuff, I think it's the shit and it kicks ass! They also afforded me the opportunity to create, as well. For me, I wanna be involved in everything. 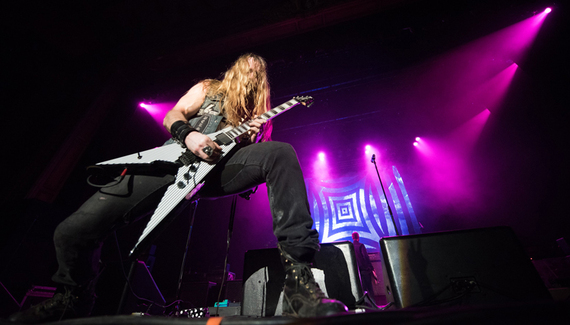 JL: Were you looking to create a similar feel and sound to your new 'fiddles' based on signature Gibson's that you have been playing for a while?

ZW: The first batch of guitars that we're putting out, I'm drawing all of them, and I tweak them. If I feel like making a birdseye maple fretboard, we're gonna do it. If we feel like making spalted maple, or zebrawood fretboards, we'll do it. Whatever me and you feel like we wanna do, we'll do it. If me and you were havin' coffee and we're looking at a table and you say, what kind of wood is this -- Brazilian rosewood mixed with some zebrawood -- what is this? Let's find out what kind of wood this is and see if we can get a batch of it because it might make a beautiful guitar top. Boom -- there you go. It's like this down to the amplifiers -- with everything.

JL: You played on the Experience Hendrix tour again this year. Tell me in your own words how Jimi's music changed the game.

ZW: When you listened to all the fellas and the gals that were out there on the tour, whether it was Eric Johnson, or Kenny Wayne Shepherd, Jonny Lang, Dweezil was up there jammin', it wasn't just the great solos, they are great songs, you know. It's not just about shredding. The core of Jimi was a blues guitar player -- that was his foundation. He was a sponge and was soaking up what was going on in the 60's culture -- it was a part of who he was and his music. 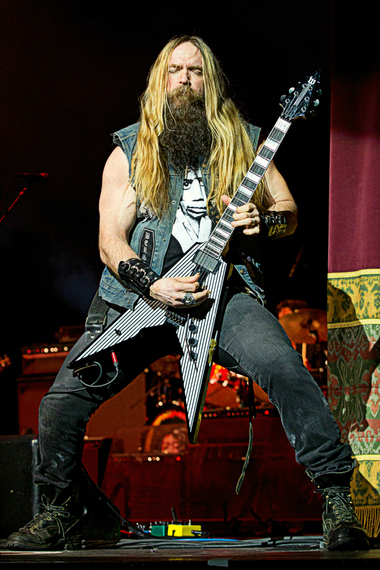 JL: Up next for you is the Generation Axe tour with Father Steve Vai, Yngwie Malmsteen, Nuno Bettencourt and Tosin Abasi. What should we expect from that?

ZW: It's a combination of the T.V. show Fame meets the second Saturday Night Fever edition Staying Alive. This is the Bob Fosse explosion to the senses (laughing). Hopefully there won't be too many cardiac arrests or people fainting, falling, or injuring themselves from the pure dance explosion that's about to be unleashed. But really, it's pretty insane. It's like an all-star game. Just listening to the guys as we did the final rehearsal the other day -- in between the Diana Ross clothing changes and the fishnet stockings, high heels, and the eyeliner down to the guitar playing. The funny thing is, you could just use one guitar and one amp and you'd know everyone who was playing in there -- that's what's so awesome about guitars.

JL: What was the single most memorable performance that you have ever given?

ZW: There's been a lot of memorable gigs. The first arena show that I did with Ozzy -- when the house lights went down, I was like, I can't believe this. From me and you being out in the audience, to here we are two years later and I'm on stage with 'The Boss' -- that was pretty mind-blowing. And then when we did the Moscow Peace Festival -- that was definitely a standout, playin' in front of that many people. We just did a Black Label gig with the Polish chapter; there were 600,000 people there. That was beyond ridiculous.

JL: You have a song on your first Book of Shadows CD called 'Road Back Home'. Whether it's Black Label Society, a solo tour, Experience Hendrix, Zakk Sabbath, now Generation Axe... you seem to always be on the road. Do you ever get to a point that you miss being home with your family?

ZW: The way that I equate to this is like this: the reasons that you have those posters of Jimmy Page on our wall, and Jimi Hendrix, and Sabbath, and all your favorite bands -- this is why you're doin' it, man. Let me put it to you this way: If you have a fear of heights, you shouldn't be working on skyscrapers -- this is the wrong job for you. I have friends who are like, man I can't believe you still tour -- I got sick of the road, I wanted to be home with my family, this and that. And I'm like, I got four kids, dude. Two of them are already done with college, one is 13 and the other is three. My kids either come out on the road, or I see them when I'm home. I don't know about you, but I didn't hang out with my dad all the time. But he was always there for the important things. I would just laugh at my buddy when he'd say, oh my wife just had a baby and I need to be home for six months, and I'm like, who the fuck are you kidding? You ain't changing any diapers. It would be great if our dads would've done that. I'm not going to go to work for six months -- I'm just going to quit my job because Susan's having that baby. I'm like: who the fuck is feeding that fucking baby? Who's buying the diapers? I think of Keith Richards who was asked when are you going to retire? Retire from doin' what? What I like doin'? 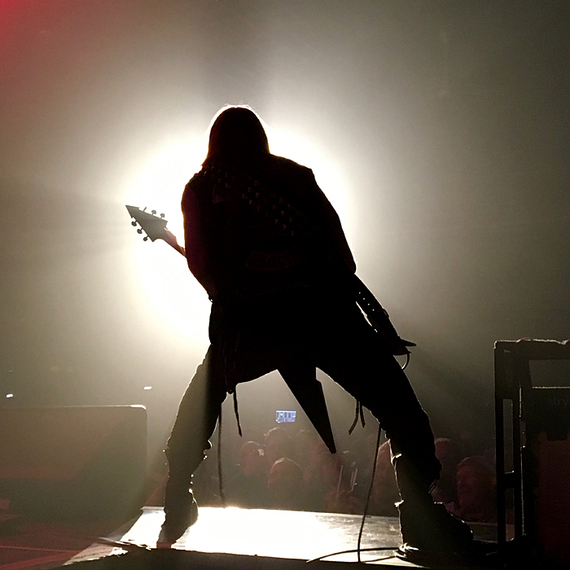 JL: You are one of many musicians who have embraced social media as a way to connect with your fans. In fact, some of your Instagram posts and videos are quite comedic. Do you remember the first post that you made that really made you think: Oh, this might be a good idea?

ZW: As far as the social media thing goes, I think it's a great way to keep in touch with our Black Label family. It's awesome. It's a great way to tell them what's going on, then me and you post a bunch of goofy shit -- I think it's hysterical, man. I mean me and you are laughing our asses off when we are posting this stuff. I know some people who couldn't care less about it or couldn't be bothered with it. I got buddies in bands who don't give a shit about any of that stuff. Some of them don't even have cell phones, let alone Twitter, Facebook, or Instagram.

JL: The things that I admire most about you, and I'm sure that your fans do as well, is the way you appreciate and respect all of the great guitar players who came before you, and your ability to be a sincerely humble and genuine person. When you speak with younger guitar players who look up to you, what advice do you give them?

ZW: Whatever it is that you love, that's what you gotta do. If Led Zeppelin moves you, or if Black Sabbath moves you, or Neal Young, or Elton John -- that's what moves me. So, why would I be playing music that didn't have anything to do with that?