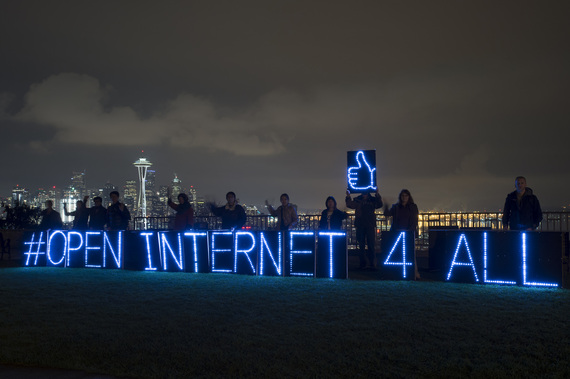 Senate Republicans' refusal to even hold a hearing on the president's Supreme Court nominee has gotten a lot of headlines. But it's not the only form of dysfunction happening on Capitol Hill.

Around this time every year, the appropriations committees in the House and Senate get together to work out their budgets. And for the last few years special interests have used these bills to push their agendas and attach poison-pill riders.

The whole charade has become rote. This is the very same dance we were doing last spring when Net Neutrality-killing provisions were tacked on to the appropriations bill that funds the FCC, along with riders attacking abortion, Obamacare and travel to Cuba. And yes, you read that right: A committee charged with funding government agencies decided to wade into the business of debating telecom issues, reproductive rights, health-care reform and foreign policy.

Like zombie bills that just will.not.die., those sneak attacks on Net Neutrality are now back. And along with them are more attempts to shut down or derail a series of FCC reforms on other topics.

On Wednesday the House subcommittee that oversees the FCC funding bill approved measures to undermine the agency's Net Neutrality rules. The three main riders are the same ones that were introduced -- and ultimately abandoned -- during 2015's budget battles.

To call these riders problematic is an understatement. One would delay the Net Neutrality rules until all pending court cases are resolved, which is a stalling tactic of the highest order. We're still waiting for a ruling from the D.C. Circuit Court of Appeals, which heard arguments last December on a challenge to the rules from the cable and phone companies. The court already denied an attempt to stay these protections last spring, but that hasn't stopped Comcast's friends in Congress from trying to accomplish with legislation what they couldn't get in court.

There's also broad and problematic language that would limit the FCC's ability to protect consumers from billing fraud and overcharging by Internet service providers and keep the agency from examining data caps and zero-rating schemes. Proponents pretend this language would just prevent the FCC from setting the monthly price for broadband, but it would do much more to undermine the Net Neutrality rules and other protections for Internet users.

And then there are the flawed provisions that would require the FCC to make any rule public three weeks before it goes to a vote. Transparency is great and it's worth talking about how to increase it. But the FCC already follows the transparency rules Congress set up for government agencies in the Administrative Procedure Act. This rider would single out the FCC as the only agency that needs to adhere to this new requirement, and the measure here would create new procedural hurdles for the FCC to clear before it can protect Internet users from abuse by cable and phone companies.

If Congress is looking to improve transparency it might want to look in the mirror, but it shouldn't act as though the FCC is especially bad in this department. The FCC can always do better on transparency, but we should also give credit where it's due and remember that it passed its Net Neutrality rules after unprecedented input from the public.

But that's just the language that deals with Net Neutrality. This latest legislation-by-appropriation effort could kill off other important protections for Internet users and TV viewers. There's language that would delay the FCC's set-top box proceeding, an effort that could lower your cable bill and increase the diversity of programming you see on your screens, from your TV to your tablet. And there's yet another giveaway to giant media conglomerates in there, expanding their power to run multiple TV stations in a given market while closing newsrooms and shutting down independent broadcasters.

Opponents of the open Internet are doing everything they can to stop, derail or delay reforms as this election year wears on. Whether they're playing games with the budget or stalling Supreme Court nominees, this kind of obstructionism needs to stop.

Members of Congress shouldn't be able to use budget bills to push the agenda of companies like Comcast and AT&T. This isn't how government is supposed to work. Appropriations bills should be used for setting budgets, not for rolling back good policy.