NEW YORK (AP) — Hundreds of police officers in riot gear raided the Occupy Wall Street encampment in New York City in the pre-dawn darkness Tuesday, evicted hundreds of demonstrators and demolished the tent city that was the epicenter of a movement protesting what participants call corporate greed and economic inequality. (Photos below).

The police action began around 1 a.m. and lasted several hours as officers with plastic shields and batons pushed the protesters from their base at Zuccotti Park. Police Commissioner Ray Kelly said around 200 people were arrested, including dozens who tried to resist the eviction by linking arms in a tight circle at the center of the park. A member of the City Council was among those arrested during the sweep.

Tents, sleeping bags and equipment were carted away, and by 4:30 a.m., the park was empty. It wasn't clear what would happen next to the demonstration, though the new enforcement of rules banning tents, sleeping bags or tarps would effectively end an encampment that started in mid-September.

"At the end of the day, if this movement is only tied to Liberty Plaza, we are going to lose. We're going to lose," said Sandra Nurse, one of the organizers, referring to the park by the nickname the demonstrators have given it. "Right now the most important thing is coming together as a body and just reaffirm why we're here in the first place."

Hundreds of protesters marched through lower Manhattan as the workday began, chanting and looking for a new space to gather. A state court judge called an 11:30 a.m. hearing on the legality of the eviction, following an emergency appeal by the National Lawyers Guild, and issued a temporary restraining order barring the city from preventing protesters from re-entering the park.

As of midmorning, though, the park remained surrounded by police barricades and officers keeping everyone out. A few dozen demonstrators sat on the sidewalk just outside the police line, waiting. In the meantime, workers used power washers to blast the plaza clean.

The surprise action came two days short of the two-month anniversary of the encampment. Mayor Michael Bloomberg said he ordered the sweep because health and safety conditions and become "intolerable" in the crowded plaza.

"From the beginning, I have said that the city has two principal goals: guaranteeing public health and safety, and guaranteeing the protesters' First Amendment rights," he said. "But when those two goals clash, the health and safety of the public and our first responders must be the priority."

He said that people would be allowed to return as soon as this morning, but that the city would begin enforcing the rules set up by the park's private owners banning camping equipment.

That left demonstrators wondering what to do next. There was talk among some Tuesday of trying to occupy another park or plaza, but there are no immediate plans to do so, Nurse said.

The eviction began in the dead of night, as police officers arrived by the hundreds and set up powerful klieg lights to illuminate the block.

Officers handed out notices from Brookfield Office Properties, the park's owner, and the city saying that the plaza had to be cleared because it had become unsanitary and hazardous. A commander announced over a bullhorn that everyone had to leave. Many did, carrying their belongings with them. Others tried to make a stand, even chaining themselves together with bicycle locks.

In contrast to the scene weeks ago in Oakland, where a similar eviction turned chaotic and violent, the police action was comparatively orderly. But it wasn't entirely bloodless.

"The cops hit my legs with a baton," said demonstrator Max Luisdaniel Santos, 31, an unemployed construction worker, pulling up his pants to show some swollen scars on his calf. "Then they shoved my face into the ground."

He pulled open his cheek to show where his teeth had cut into the flesh as he hit the stone paving.

"I was bleeding profusely. They shoved a lot of people's faces into the ground," Santos said as he stood near the park Tuesday morning, looking shaken. He said he lost his shoes in the scuffle, but wasn't arrested.

One person was taken to a hospital for evaluation because of breathing problems.

City Councilman Ydanis Rodriguez, who has been supportive of the Occupy movement, was among those arrested outside of the park. Kelly, the police commissioner, said he was trying to get through police lines to reach the protesters.

Protesters were able to grab about $2,500 in cash that was at the plaza before police kicked them out, said Pete Dutro, who is in charge of the New York City movement's finances.

Bloomberg said the evacuation was conducted in the middle of the night "to reduce the risk of confrontation in the park, and to minimize disruption to the surrounding neighborhood."

"The law that created Zuccotti Park required that it be open for the public to enjoy for passive recreation 24 hours a day," Bloomberg said. "Ever since the occupation began, that law has not been complied with, as the park has been taken over by protesters, making it unavailable to anyone else."

He said the city would contest the motion filed by the National Lawyers Guild, a civil rights organization that has been representing arrested protesters.

Concerns about health and safety issues at Occupy Wall Street camps around the country have intensified, and protesters in several cities have been ordered to take down their shelters, adhere to curfews and relocate so that parks can be cleaned.

The surprise ouster at Zuccotti Park came as the movement was at its most vulnerable. A rift had been growing in recent weeks between the park's full-time residents and the movement's power players, most of whom no longer lived in the park.

The protesters who actually made things happen — the ones who planned marches and rallies and set plans into motion — held meetings in donated office space high above the park, in skyscrapers just like the ones housing the bankers they were protesting.

Some residents of Zuccotti Park have been grumbling about the recent formation of a "spokescouncil," an upper echelon of organizers who held meetings at a high school near police headquarters. Some protesters felt that the selection of any leaders whatsoever wasn't true to Occupy Wall Street's original anti-government spirit: That no single person is more important or more powerful than another person.

But other protesters felt that Occupy Wall Street needed to be bigger than Zuccotti Park — that they had, in a sense, outgrown it. Occupy encampments have come under fire around the country and even overseas as local officials and residents have complained about possible health hazards and ongoing inhabitation of parks and other public spaces.

Anti-Wall Street activists intend to converge at the University of California, Berkeley, on Tuesday for a day of protests and another attempt to set up an Occupy Cal camp, less than a week after police arrested dozens of protesters who tried to pitch tents on campus.

The Berkeley protesters will be joined by Occupy Oakland activists who said they would march to the UC campus in the afternoon. Police cleared the tent city in front of Oakland City Hall before dawn Monday and arrested more than 50 people amid complaints about safety, sanitation and drug use.

In London, authorities said they were resuming legal action to evict a protest camp outside St. Paul's Cathedral after talks with the demonstrators stalled. 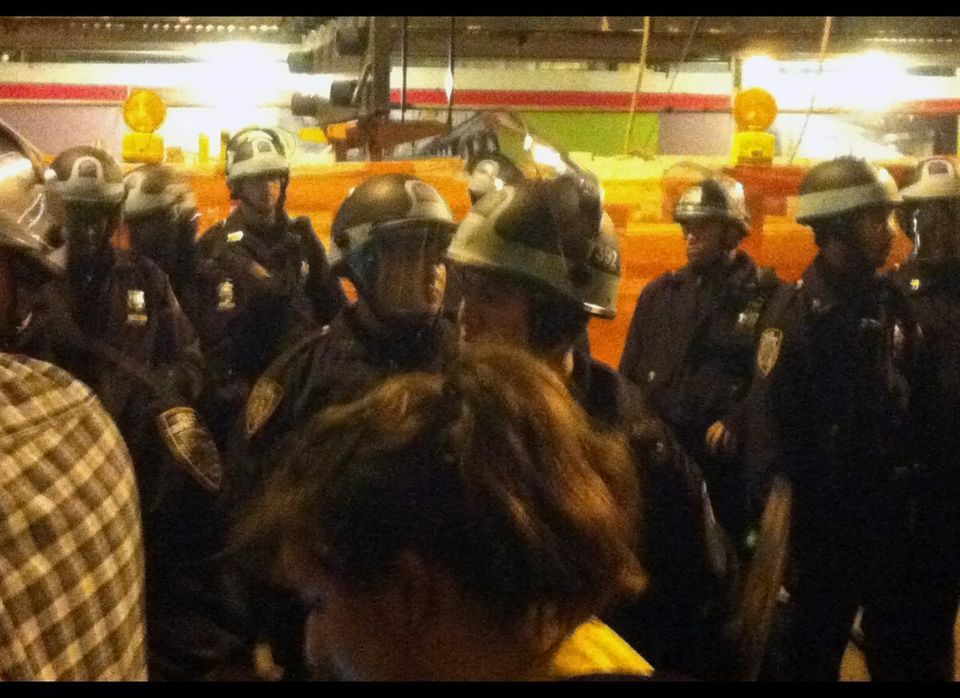