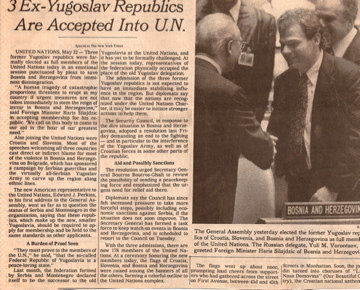 Photo: New York Times, May 22, 1992 This is not just about Bosnia but rather the reactionary appeal of nationalism, populism and manifestations of walls, physical and psychological. It was 24 years ago today, May 22, 1992, when Bosnia & Herzegovina (BiH) became a member of the United Nations, and I was appointed its first Ambassador. Then was a time of high expectations as well as urgency. The Berlin Wall had just been torn down, but BiH was being engulfed by conflict that appeared to be the last gasps of an authoritarian system suddenly transforming itself from communist to nationalist-fascist. However, few thought that after the collapse of the Soviet Union that new walls would become the currency of political exploiters, whether Austria, Myanmar, Syria, or U.S. (Read: "Putin Drops the Bombs & Deals the Cards in Syria & Ukraine") 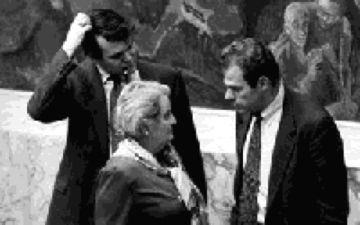 BiH's admission to the UN was the reborn state's first diplomatic success in an effort to confront a war of aggression from outside and a divisive-fascist assault from within upon a centuries-old tradition of diversity and co-existence. As Sarajevo, BiH's capital and its institutions, were besieged and already in the early stages of an effort to strangle and ethnically cleanse all of its Bosniak (Muslim), Bosnian Croat (Catholic) and all others who would oppose the war and killing for homogenization, I became the voice and face of a country in which I was born, even if I was most American in my personal and political culture -- one might say that I was the coincidental Ambassador designated by necessity. As one trained in law and having succeeded as an investment banker, the challenge did not appear beyond reach. Most importantly, the US with its multi-ethnic values just enshrined in the face of obstinate segregationists appeared an ideal political and economic model to suppress those waging violence against "the other" as well as diversity. The new Europe, with millions now freed from the yoke of Soviet domination and facing the challenge of integrating newer potential members and older generations of immigrants, needed more bridges even as the walls collapsed. The struggle of Bosnia was not an isolated conflict between rival religions or ethnic groups but a defining battle between the new vision versus the old fears and their mongers.

Stereotypes & Cliches as Weapons of Wall Builders: However, from the outset BiH's and my greatest enemy were stereotypes, and the effort to exploit such by those who did not have the vision and/or will to confront hate mongers. Having failed to dissuade Slobodan Milosevic, (then Serbia's strongman), and his agents, the language of ethnic divides was adopted by mediators and much of international diplomacy. The conflict started to be described in the cliches of "age-old hatreds" and "millennium-old wars" as if the mediators were tackling flawed genetics and history. Of course, many of these same mediators and diplomats had come from a European continent that had seemingly overcome its own ugly cliches and narratives to erase suspicions and wars in favor of a new European vision. If anything, BiH seemed more an oasis of diversity and coexistence through previous centuries in Europe even as it became a crossroads for rival empires. 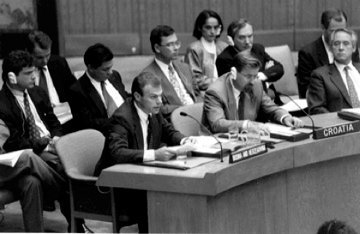 From the beginning, I sought to build a BiH Mission (Embassy) to the United Nations that would reflect the diversity back in BiH. While Sarajevo was defended by a multi-ethnic army of newly minted citizen soldiers, our diplomatic UN outpost took on volunteers: Serb, Croat, Jewish, Bosniak, American, or simply global citizens, (before the term was ever coined), who saw both an existential struggle and one beyond BiH that could and would define the course for so much more across and within borders. The persons who worked in our mission, Christian, Jewish, Buddhist, agnostic, atheist or Muslim, seemed to better represent not only tolerance but the advantages of diversity in action. However, it was expedient back then to define all Serbs (Orthodox Christians) as represented by Slobodan Milosevic, Radovan Karadzic and war-lord Ratko Mladic, thus legitimizing only them as negotiating partners rather than treating them as the carriers of contagious nationalism-populism that would spread, contaminate and infect its fascism, including to non-Serbs.

Not Victims - Strength in Diversity Rather than Weakness in Reciprocity to Hate:

Our diverse UN Embassy, and not just my personal American culture and tone were probably one of the more disconcerting testimonies to the stereotypes and cliches. This was not though just in New York City but also back in BiH where the "Miss Besieged Sarajevo" pageant tore down barriers in people's perceptions. (Read: "Diplomatic Bluff to Break the Longest Modern Siege...")  As hard as some would try to break us down into such delineations, our resistance to resort to ethnic or religious descriptions of the conflict or at least its causes frustrated both the enemy and those presumably tasked with mediation. Ironically or perhaps not, the efforts of the ultra-nationalist, fascist to paint the conflict as ethnic or religious coincided with that of many presumed mediators. While the targets were defined by their ethnicity or religion as means to promote complicity as well as their ideology of exclusion, this strategy would only be truly successful if there were a reciprocity in hate and intolerance. If the resolutions to the conflict were primarily crafted in ethnic/religious terms, this both legitimized the extremists and fashioned a solution on their terms.  These were no more Serb champions than Islam is represented by ISIS, (Watch - @ Terror in Bosnia) American or European Christian by the Klan and "Far Right," Jews by the JDL, Buddhists by "696" or Hindus by.... -- well, are we all becoming caricatures in a reversion to conflict?

There was also another stereotype that we did not wish to fulfill, that of victim. Perhaps it was in part my American manner and legal training, but the assumptions that BiH was asking for something beyond an inalienable right or that it was doomed to fall had to be challenged. The even greater courage, ingenuity and persistence of BiH's defenders and citizens rebuffed the predictions of inevitable defeat -- but without the weapons or assistance lifting the sieges and liberation were also not probable, at least not without so many more killed and lives wasted without any overriding purpose except to fight back and survive. In the end, for NATO, US and European assistance, the price was the Dayton Accords, defining both the conflict and its resolution in largely ethnic/religious terms. After all, what mediator would admit that he is crafting a peace deal that would legitimize the demands of haters, like let's say ISIS, the Klan or Karadzic/Mladic? (Read: "Seduction Diplomacy") It was always my hope, even expectation, that Euro-Atlantic integration would bend the Dayton Accords toward such political values. However, has Europe and the US now been infected by the bug that was still treatable a quarter century earlier? Is this the bug that spreads as legitimate cure to the cries of populist snake-oil purveyors, from Syria, Myanmar, and Africa to Austria and the US? BiH is now more divided but the divisions are even more manifested in the fabric of Europe and the US, or certainly the rhetoric that has reverted from what we knew was the stairway down. (Read: "Do US & EU Now Need Bosnia as Partner Even More than Vice Versa?")