"Robromance." Look it up. It's a thing -- or, it's about to be, after the premiere of futuristic buddy cop drama Almost Human on November 17th. Once again, we'll all get enjoy that special bond between man and machine, a bond that's been lovingly described time and again throughout the annals of our race. From Rosie's maternal affection for Elroy Jetson to Tom Haverford's enthusiasm for his for DJ Roomba, robromance comes in all shapes, sizes, and software updates.

Because we love robots so much, we wanted to give our favorites the chance to star in a police procedural all their own. Here are 11 brand-new TV shows, imagined for all of our fellow A.I. enthusiasts out there. And if any real robots are listening... bleep blop blorp. 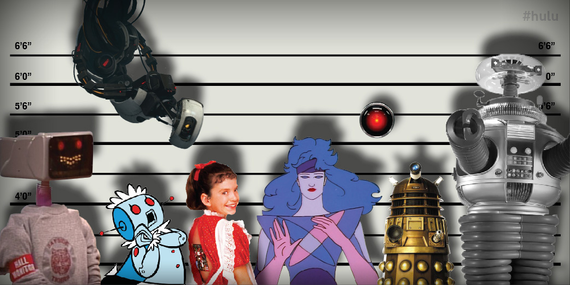 From David Simon, creator of the classic gritty crime drama, The Wire, comes the latest glimpse into the life of the inner-city police beat. Set in a troubled Detroit high school, V.I.C.E. tells the story of Officer Johnny 'Stitches' MacIntyre and his android partner on the inside, Vicki. After an ill-fated drug raid leaves him blind, Stitches enlists the aid of a Voice Input Child Enforcer to be his eyes and ears on the inside. Vicki acts and looks like any teenager: monotone, listless, and consistently dressed in a red polka-dot frock and crisp white apron. But she has an electrifying secret: she's a robot. After years on the force together, Stitches and Vicki have become more than partners: they're a family. It's no Small Wonder that this show will keep your mind riveted and your heart warmed. -- Courtney Hyde

From the executive producers of NBC's 2013 hit FBI drama, The Blacklist and the creative genius of Stanley Kubrick, comes this season's most compelling crime drama, A Cold Day In HAL. HAL 9000 returns as Special Agent Hal Bowman, a brilliant, sentient computer with a dark past. Brought out of retirement and partnered with greenhorn Agent David Poole, Special Agent Bowman has been contracted by the FBI to track down a dangerous criminal mastermind who is bent on assassinating the president of the United States.

Locked in a cramped room together at the FBI headquarters in Quantico, largely because Special Agent Bowman is a computer and has no corporeal body, Hal must use every trick in his operating system to survive: his innate sense of heuristic analysis, his superhuman propensity for reading lips, even his extensive knowledge of pop music from the late 1800s, all while concealing his violent past from his by-the-books partner. As the race to find the suspect continues, tensions quickly mount as Agent Poole unravels Hal's deep secret, his homicidal past. Could it be that Special Agent Bowman is the deadly assassin they've been searching for all along? Will Agent David Poole confront his partner and learn the truth? Only Hal can tell. But he's sorry, Dave, he's afraid he can't do that. -- Matt Horn

Murphy begins to notice strange things happening when his robot pal joins the beat. Surely the fact that Conky's infamous secret word of the day invariably corresponds to a key element of a crime reported in the local police blotter can't be a coincidence! Armed with Conky's uncanny foresight, and Murphy's ability to distract criminals by breaking into improvisational song and dance, the two become the greatest crime-stopping duo Kalamazoo has ever seen. If Conky's word of the day is 'glaze,' you can bet the pair will case out the local donut joint for any suspicious behavior. Weave? The basket shop on Main St. could use the old knock and talk.

The two are unstoppable. That is, until the FBI catches wind of Conky's quirk. Will they recruit Conky for the big leagues? Will Murphy find a use for nineteen baskets? What's the word of the day, Conky? Find out on Rap Sheet. -- Rudy Martinez

From the creators of The Notebook comes a brand new romantic robot cop drama featuring Rachel McAdams and a Dalek from Doctor Who. McAdams plays Kate, a rookie cop fresh from the academy with a lust for anything mechanical, while the Dalek stars as Bob, her single-minded mentor and training officer. As they pursue bad guys and work to protect the dreamy, Spanish-moss-covered streets of Savannah, love begins to blossom -- but not without serious road blocks.

Can Bob quell his thirst for Universe domination and hatred for all non-Dalek life to really open up and let Kate in? Will Bob ever be able to say "I love you" instead of "Exterminate!"? Can Kate overlook the fact that Bob is not a robot, but actually a cyborg with a squishy alien center? And, most importantly for a Nicholas Sparks-style cop drama, can a Dalek even cry? -- Kristin Knox

5. Rosie from The Jetsons

Brilliant, bad boy detective Dan Lance (Dane Cook) is at once the gem and the burden of his precinct: his uncanny ability to solve mysteries makes him invaluable, but his reckless disregard for authority makes him a pain in the neck. When Lance's bad attitude leads to a failed drug bust and the exposure of an undercover detective, his captain decides he's stepped out of line one too many times. Enter Rosie, a sassy, maternal, no-nonsense robot who is promptly installed as Lance's new partner. As unhappy as Lance is with his new ride-along sidekick, Rosie is even more uncomfortable, much preferring her former domestic duties -- even when those got dangerous.

When their first case puts the newly-minted duo near certain death, Lance grows a new appreciation for Rosie's incredible efficiency and detail-oriented approach to danger. Plus, she reminds Lance of his Nana. It'll take a little longer for Rosie to reciprocate the affection, but when a mysterious new villain (also played by Dane Cook) begins to terrorize the town via the sewage system, she has no choice but to draw closer to her human partner. And it helps to have some sewage to clean up. -- Naivasha Dean

When Chell, a strong-but-silent human cop, and the artificially intelligent, slightly sinister computer Al GLaDOS are paired up to police post-apocalyptic San Francisco, they both know that sacrifices will have to be made for science. Things go wrong right away when they are trapped in a sadistic scientist's lair on their very first assignment. Forced to undergo testing to prove their worth, tensions rise as GLaDOS, whose CPU has been transferred to a potato, becomes increasingly passive-aggressive to Chell, blaming her witless naiveté for their predicament. Hostilities come to a head in a breathtaking trial-by-fire. Over the course of the season, loyalties will be tested, secrets will be revealed, and the promises of pastries will be found to be vastly overrated. -- John Sykes

7. Screech's Kevin from Saved By the Bell

Are you ready for Dustin Diamond's return to TV? Well, neither are we, but it's happening and he's bringing Kevin, his trusty Saved By the Bell robot sidekick, along with him. In the 90's, Kevin rolled around in Screech's bedroom, served as Bayside High's assistant hall monitor, and was selected by NASA to travel the galaxy for "research." In the new hit series Kevin on Earth (from the creators of Smallville and the terrible Charlie's Angels remake), Kevin's space pod comes crashing down to a very different Earth than he remembers in the year 3013. Diamond, who plays Special Sergeant Gunnar Goodman, runs into his old pal Kevin and convinces him that, with Goodman's future street smarts and Kevin's mysterious galactic knowledge, together they can restore order to the world -- and maybe even beat Valley, too. -- Mallory Carra

If you liked Step Up and Save the Last Dance, you'll love this surprising new cop drama starring DJ Roomba and former Paris Opera Ballet director Benjamin Millepied as detectives in charge of assembling an anti-gang task force. Half vacuum, half MP3 player, DJ Roomba might be little, but he's not messing around when it comes to cleaning up the streets. While Millepied finds Juilliard hopefuls in need of an edgier take on their stodgy dance routines, Roomba hits the underground club scene for hip hop-savvy troublemakers. One pas de deux at a time, this duo turns Bloods and Crips into Sharks and Jets. Urban warfare has a new home in this neighborhood: the dance floor. -- Katherine Rea

9. Synergy from Jem and the Holograms

In this coming-of-age cop comedy-drama set in Brooklyn, Andy Samberg is Andy, your average childish, lunkheaded cop who won't grow up, yet just doesn't understand why he sucks at his job. But one night while doing gravity bong hits in his junior studio in Bushwick, a transparent figure with purple, feathered hair and an all-purple spandex aerobics outfit miraculously appears in front of him. She tells him her name is Synergy, and she's an A.I. computer/hologram projector created by his father in the '80s (that explains the outfit) but kept a secret -- until now.

Together, through Andy's star belt buckle, Synergy uses her powers to help him get his life on track by generating holograms to help him go undercover, from a suave drug lord to a high-class hooker. But she also helps teach Andy straight up life lessons, yo -- like how it's disrespectful to tell a girl that she's got a "nice rack." Soon, Synergy will see that there really is a nice, respectful guy inside Andy, and Andy will grapple with the notion of falling in love with a computer.

When they're not banding together fighting crime on the streets, Synergy uses her holographic powers to throw the sickest warehouse parties in Bushwick. (Her specialties: bringing dead musicians back to life and autotuning Lonely Island remixes.) Synergy is the "ultimate audio/visual entertainment system," after all. Truly outrageous. -- Sheila Dichoso

10. The Robot from Lost in Space

Despite the initial oil and water hesitation to their pairing, we watch this odd couple work through their differences while tackling undercover assignments in problem inner-city middle schools in Arkansas. While Officer Robinson adopts the roles of substitute teacher, teacher's aide or student (dependent on circumstance and lighting), Officer Brite, with his unwieldy robo-figure, is stuck going undercover as an industrial power vac or water boiler. Being a high-action police drama, there are additional challenges posed through B-9's inability to move nimbly or even ride shotgun in a squad car. Using such weaknesses to their advantage, the writers of Brite & Holly bravely take on controversial topics, such as the handi-capable limitations of 21st century robots from the 1960s, and robot drug abuse, as seen in the devastating loss of Officer Brite's addict brother (guest star Twiki of Buck Rogers fame) in a gut-wrenching episode where they bidi-bidi-bid their good byes.

The year is 2056, and Caprica Six has been brought in to the LAPD to investigate a secretive group of robots who have gained intelligence and have started calling themselves Cylons. Humanity's over-reliance on robot technology has started to take its toll, and the Cylons are becoming a menace to society. Six and her partner, Gaius Baltar, have to investigate rumors of a new technology developed by Cylons which allegedly makes them look more human that robot. These developments could lead to a Great War between the humans and machines, but that is Caprica Six's last concern when she learns the truth about who she is: a prototype Cylon double agent, one of many stationed around the word. Will Caprica protect the human she thought she was a part of? Or will she cave to her robotic instincts and the destruction of the human race? How similar is this show's plot to the plot of Battlestar Galactica itself? How likely are we to get sued? -- Oscar Rohena