On a summer's day back in 1969, rock legends such as The Who, Janis Joplin, and the Grateful Dead took to the at the Woodstock Music & Art Fair stage in Bethel, New York. And just like that, they sparked a music sensation. Today, festivals around the world strive to recreate the magical atmosphere and universal connection felt by all who took part in Woodstock. Though concert-goers may no longer be gathering in protest, legions of fans across the world still take to the great outdoors to camp in muddy fields, sacrifice hot showers, and don makeshift ponchos to watch their favorite bands enchant thousands.

Only a lucky few can say they witnessed Jimi Hendrix turn the "Star Spangled Banner" into a nearly unrecognizable melody of electric guitar distortion, but dedicated rockers still jump at the prospect of watching their musical heroes deliver one-of-a-kind performances. 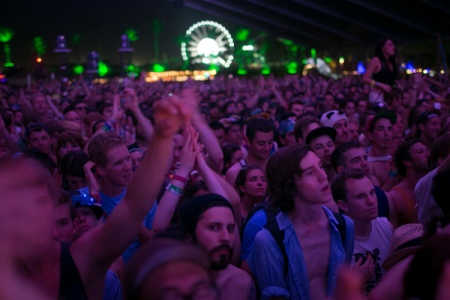 No concert will ever come close to Woodstock, but the festivals listed below boast unparalleled locations, stellar line-ups, and rockin' good times. From a 700-acre field in rural Tennessee to the eastern slope of Japan's Mount Takenoko, here are 10 music festivals that audiophiles won't want to miss.

Coachella, the annual Indio, Calif. music festival that brought Tupac Shakur back to life--in hologram form, that is--has proved its capability to surprise concert-goers, despite its growing global competitors. What started in 1999 as a series of pop concerts has quickly transformed into a multi-day event featuring 176 acts, art installations, and star-studded pool parties. Since 2012, Coachella has offered the same lineup on two consecutive weekends; a new installment that some festival critics (including The New York Times), claim makes the festival seem money-hungry, and takes away from the concert's former free-spirited atmosphere. However, fans can now take in more shows and stretch out their Coachella experience over a few more glorious April days. Standout headliners set to take the stage in 2013 include The Stone Roses, Blur, Phoenix, and the Red Hot Chili Peppers.

As far as outdoor music festivals go, it's tough to beat Primavera Sound's location (or its lineup). Situated on the banks of the Balearic Sea in Barcelona's Parc Del Fòrum, this festival venue affords sweeping views of the city skyline and Catalonia's mountain ranges. And while you're rubbing elbows with your festival brethren, the cool, salty air provides a pleasant relief from the springtime heat. Along with its seaside setting, Primavera is perhaps best known for featuring experienced headliners alongside up-and-coming stars, offering attendees the chance to catch on to new genres and artists. Though the festival first began in 2001 with a focus on pop and dance artists, it has since expanded to include a wide range of musical tastes, showcasing everything from hip-hop to alternative rock and everything in between. The 2013 festival will feature the Wu-Tang Clan, Phoenix, Fiona Apple, and My Bloody Valentine, among others.

Glastonbury is a legend among music festivals, and for good reason. Sprawling across 900 acres on Worthy Farm in Somerset's Pilton Village, Glastonbury stands as the largest green field music and performing arts festival in the world. It kicked off on September 19, 1970--one day after Jimi Hendrix's death--with 1,500 attendees paying just £1 GBP (about $1.50 USD) to enjoy the festivities. Occurring off and on ever since, attendance has ballooned significantly. And with past headliners like Paul McCartney, R.E.M, Radiohead, David Bowie, Bruce Springsteen, and Oasis, it's easy to see why die-hard fans continue to trudge across the soggy farmland to hear their icons belt out their favorite tunes. But the music is only one aspect of the festival experience. Glastonbury Festival also boasts a variety of theater and circus performers, a "Dance Village," and even Britain's largest free children's festival.

If you've made the trek across the pond to Primavera Sound, why not hop on over to Sónar? Similar to Austin's annual South by Southwest event, Sónar spotlights emerging artists in music, art, and technology. Now in its 20th year, the festival has also expanded its reach beyond Barcelona to São Paulo, Reykjavik, Cape Town, and Tokyo. The festival is broken up into two programs: Sónar by Day and Sónar by Night. During the day, you can catch concerts and exhibitions from emerging artists at the massive Fira Montjuïc area in Plaça d'Espanya. Come nightfall, you can take a quick 10-minute shuttle bus to Fira Gran Via area in L'Hospitalet de Llobregat to behold international headliners, like Pet Shop Boys, Skrillex, and Two Door Cinema Club. If you can't make it to Barcelona, you can still catch the same bands in any of the other Sónar cities.

Spending days without a shower or any connection to the outside world may sound hip and free-spirited in theory, but most of us can only comfortably endure one day of pungent B.O. from fellow sweaty, beer-fueled festival-goers. Not only does the INmusic festival boast stellar rock performances by the likes of the Arctic Monkeys, Iggy and the Stooges, and NoFX, it also provides complimentary services for paying campers, like hot showers, WiFi, and charging stations for your electronics. Just call it the Woodstock of the 21st century. And while you won't be swaying on muddy fields, you will be in the heart of the Croatian capital. When you need a break from head banging, take a dip in the cool waters of Lake Jarun, find your inner Namaste with a free yoga session, or fork over a little extra coin for an excursion to Plitvice Lakes National Park.

Calling to mind the tie-dyed revelers and well-tramped stomping grounds of Woodstock lore, Bonnaroo invites nearly 80,000 spectators to spread out across 700 acres of Tennessee farmland for 150 performances spread across four days. This year's acts include industry idols like Paul McCartney, Mumford & Sons, and Tom Petty & The Heartbreakers, among others. While Bonnaroo is undoubtedly about the music, it's also about global consciousness and personal well-being. So when you're not rocking out to your favorite band, you can use the down time to register to vote, learn about human rights issues or global warming, or prepare for more moshing with morning yoga and meditation. And although you may be sharing cramped quarters with your fellow revelers, you won't be living off of canned beans and ramen--on-site food vendors provide vegetarian, vegan, and gluten-free eats, while the Broo'ers Festival showcases more than 20 breweries.

Splendour in the Grass

Reflecting the free spirit ethos of beachside Byron Bay, Splendour in the Grass exhibits a laid-back, authentically Australian ambiance. While it may be summer in the U.S., it's winter in the Southern Hemisphere, which is initially why this festival was created--to fill in the calendar gap between the seasons. Newly relocated to North Byron Parklands, a 660-acre swath of green nestled in the Byron Shire, Splendour in the Grass offers campgrounds, tents, and teepees for rent. While neither the 2013 lineup nor the official dates have been released yet, 2012 boasted a wide variety of Australian and international acts, including Jack White, Fun., Smashing Pumpkins, and Kimbra. Along with world-class performances, you can expect an art program featuring street art and large-scale installations showcasing artists from Australia and beyond. To look the part of a true festival-goer, head on over to the Very Small Mall, a pop-up shop that offers high-end designer apparel alongside thrifty local labels. If you brought kids in tow, you'll be happy to note Splendour in the Grass devotes an entire field to budding festival faithfuls, with face painting, storytellers, and of course, musicians.

Taking a cue from many of Europe's biggest music festivals, this four-day bacchanalia takes place in a small village. Hordes of music aficionados descend on Werchter, a tiny music mecca just nine miles north of Leuven, to sway to some multi-genre sonic heavyweights. With just three stages filled with musical talent (you won't find any impromptu yoga sessions here), Rock Werchter may not appear to be in the same class as other music events listed here. But with its attendance of 140,000 rockers in 2012, this Belgian celebration certainly proved itself as a standout festival. Its emphasis on showcasing top music talent also caught the attention of Festival Awards Europe, which recognized Rock Werchter as having the Best European Festival Line-Up in 2011. This year's line-up may help the festival reclaim its title with performances by Green Day, Kings of Leon, and Of Monsters and Men, among others.

The Fuji Rock Festival certainly outshines its competitors when it comes to festival grounds. Tucked away on the eastern slope of Mount Takenoko at the Naeba Ski Resort, this event draws die-hard music fans willing to travel far and wide to get there. However, as soon as you spot the lush green peaks framing the open-air stages, the rough terrain and your muddy boots will quickly be forgotten. Sure, Fuji Rock's unparalleled location is not without its problems: During the festival's inaugural event in 1997, the Red Hot Chili Peppers had to stop playing halfway through its set due to a typhoon. But while the rest of the festival was cancelled, the surprise Act of God didn't stop organizers from trying again in 1998, solidifying Fuji Rock as a go-to international festival. To accommodate the throngs of attendees, festival organizers created the Oasis, largest large hospitality area offering international cuisine from Africa to Hawaii. And if listening to music icons play has inspired you to pick up an instrument, head to the Stoned Circle for some free-form percussion jamming. While the 2013 lineup is still under wraps, 2012 featured internationally acclaimed artists like Radiohead, Jack White, and The Shins, to name a few.

Sziget bills itself as "7 days of non-stop partying," welcoming fans from more than 70 countries on Budapest's stunning Óbuda Island. First created in 1993 as an answer to the dissolution of socialist summer youth camps, Sziget started off with 200 concerts on two stages and has since grown to include 200 daily programs (including musical acts and other performance art spectacles) at 60 venues. This year's lineup features Blur, Azealia Banks, and Hadouken!. When you need some respite from grooving to international beats, you can learn to belly dance and to speak Hungarain, or you can tap into your inner daredevil with some bungee jumping. And if you're looking to explore Budapest, you can purchase a CITYPASS, which provides free access to the city's public transit, as well as free or discounted entrance fees at the city's baths and beaches. Once you're feeling recharged, head back to the fairgrounds for more pulsating beats.