The polling place I usually go to -- the local Sheriff's office just down the street -- was closed down this year. So I ventured out to the alternative this time, the local Grocery store, and stood in line. It was boring. It was maddeningly inefficient. It was cold (we extended the line down the frozen food aisle) and it was educational. Here are my top 10 lessons from last night's voting experience.

1. If you see lines during early voting, take note and get in one.

The "long lines" I saw at the grocery store / polling place last week during early voting were stretched out by about 20 people, all the way to the ready-made salads that are right by the door. I thought I would just come back later (when the line was shorter) but later turned out to be at the end of election day and the line was closer to 150 people. I realize this should have been obvious to me now. But at the time I just thought I must have come in at an unusually busy time. Now we know. 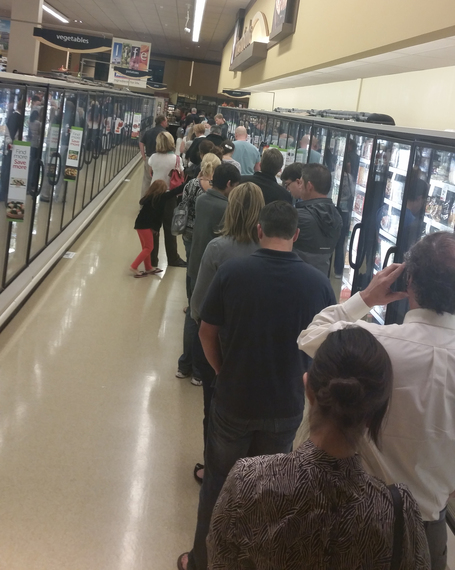 2. In some places, you can vote at any polling station.

This is true in Austin, Texas but I don't know where else. Still, it's worth knowing for next time. I've always thought that you had to vote at the polling place that is nearest to your home. It used to be that way as you had to show up on that district's list in order to vote there. But now, you can apparently go to any of them and they'll find you in the system. This news seemed a little bit cruel as I stood next to frozen pizzas, having passed the vegetables, potatoes and ready-made biscuits and Texas Toast.

3. If you're coming from work, change into comfortable shoes.

Granted, this one is more helpful to the ladies but the reason I was voting late in the day was because I had to give a presentation at an event, on my feet most of that day. I was in nice (read uncomfortable) shoes and had even stopped at home quickly to say hi to my kids and visit briefly before running over to vote. But I didn't change my shoes. I realized just a few minutes in that I didn't want to stand there in my beautiful-but-painful-after-a-long-day-on-my-feet pumps. You can only rock back and forth and scrunch your toes so much before it just becomes useless. And I'm sure I was making faces.

You might need to have your place in line saved and strangers aren't going to do it.

I went with my husband to the polling place -- and thank goodness! Ten minutes in, I needed to run to the ladies room and the line was still forming behind us at ten till closing. If he hadn't been there, I would have just endured the wait but I would have been miserable. Plus - it was nice to have someone to talk to and to people watch with. There was some GREAT people watching, like what you used to be able to do in an airport back when we could all go in and sit by the gate. Good times.

5. Don't think for a second that you're going to multi-task.

Accept your fate and stand there. This is part of why you bring a friend. There were people on phones, people trying to shop for groceries and then jump back in line. People with kids that wanted to run around and pick out candy and cookies in the bakery. One poor woman had her grandson with her and he decided he was going shopping for a cake. He was four. The little one kept running over to the bakery, picking up a cake and bringing it to his grandmother -- so proud of his selection. Early on in this game, she would ooh and ahh over his choice, obviously praying that he would not drop it and force her to leave the line and pay for it. By the end she just stopped responding. I heard him as she was leaving the building ask, "wait, aren't we going to shop for cakes now?". She held his hand sweetly and kept walking to the car. Grandmothers are awesome.

6. They don't count your vote for a while when you vote that late.

I'm not sure this one is supposed to be true but I very clearly heard one of the poll workers on his cell phone talking to another poll worker at another location, explaining to them that they would not be counting these votes made right now until tomorrow or maybe the next day. I have to say that while that may be the reality, it was extremely discouraging to hear after waiting in line for an hour already and having more to go while you wait to make your one voice heard. I looked around at my line mates, asking with my eyes (you don't actually talk to each other apparently) whether anyone else heard this. The only person that seemed to get it with me was another poll worker who was managing the line. She smiled at me and sort of glanced at him as if to say, "I know, it sucks, right?" and then I took two steps closer to my chance to vote. Tonight. Because it still matters.

This was news to me. I'm a fan but really, the packaging alone is ridonculous. That's a word. I know this has nothing to do with voting in the midterms, but you learn odd things when you stand in the frozen food line for an hour. This one stood out. Just sayin.

8. Efficiency is not #1 on the list for the polling station.

You would think it would be be key, but it's not. Accept it and move one. This isn't about the line snaking through baked goods, fresh soups and salads, around the holiday baking display and over to the public restrooms and lounge area (yes, in Texas our grocery stores come with a lounge that has a TV, leather couches and a fake fireplace -- it's lovely, really) But the line wasn't the inefficient part. It was the END of the line just before you cast your ballot that made people crazy. I watched people actually start pulling their own hair trying to fathom why we were asked to cross lines three times. You would enter the polling area, crossing through a line of people in another line. Then pass one station to give your ID, then move to the next station to get your ticket, then cross back through the original line to match your ticket to a voting code, then you got to vote and then you crossed three lines to get out. It looked like the first day first grade in the cafeteria. Chaos.

9. If you vote late, be prepared to learn the race was called by the time you get home.

This happened. Not kidding. I got home, opened my phone to look at twitter and see if any of the Eastern results might be in yet and was surprised to find that the Governor's race in my own state, one of the votes I had just cast, had already been called. I'll admit that hearing the poll worker that they wouldn't count my vote today had taken some of the sting out of this news. I was semi-prepared. And I don't regret standing in that line. I did my civic duty. And my kids know I did it. And when they can vote, they will. Hopefully they'll learn from my mistake and vote early so it at least feels like it mattered.

By my count, there were at least 10 people on hand to make this thing go. Each station had a person and the line was monitored and there was the guy on the phone and some others just in case. In all seriousness, without these people giving their time none of this would happen at all. There are rumbles in the line about the age of the volunteers. There are people noting how long it is taking to check ID. But you know what? There is patience in their faces. There is a man that is there every year that we have gotten to know and he is ALWAYS smiling and happy to be involved. There are all walks of life manning those stations. They deserve thanks - not the complaints and grumbling about age and all that comes with raising your hand and saying "Yes, I'll help out with the election process". It's a thankless job. And they do it with a smile. And I'm happy to wait in that line to cast my vote and it's my own darn fault for thinking the early voting line was too long to jump in. I procrastinated and got what I deserved. A chance to stand in the frozen food isle for about an hour with my husband, people watching, learning more about the election process and appreciating the people that show up everytime, all day long, to help make it happen. 'Merica. #castyourvote #nomatterwhowins