Despite significant cost-cutting measures taken in recent years, Illinois school districts are having to tap into their reserves and borrow more as state and federal funding dries up, according to a new report by the Illinois State Board of Education.

School districts are placed into one of four categories based on their financial health: Financial Recognition (best), Financial Review, Financial Early Warning and Financial Watch (worst).

The City of Chicago School District 299's financial score declined this year, landing the state's largest district in the lowest designation of Financial Watch for the first time in the state's 12-year history of providing this analysis. As of June 30, 2014, the district has been deficit spending for the last two fiscal years and had only eight days' cash on hand. If this trend continues without additional revenue or reduced expenditures, Chicago is projected to have a negative fund balance for its operational fund in FY 2015, with a deficit of $862.3 million.

A total of 38 school districts are on this year's Financial Watch list, which accounts for 22 percent of all the public school children in Illinois, according to ISBE.

Here are 15 of the Illinois school districts on this year's Financial Watch list:

Click on the map to see which other districts are in bad shape: 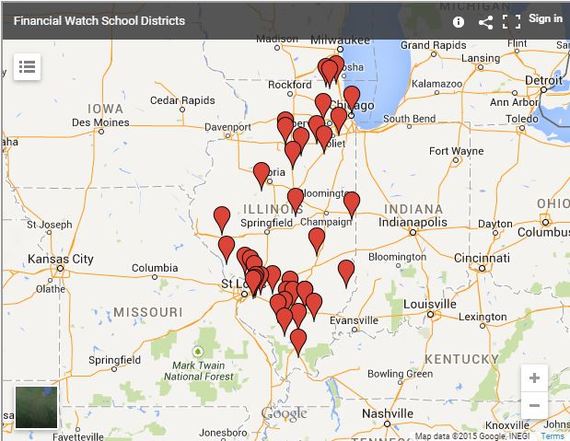 RELATED:
Download
Calling all HuffPost superfans!
Sign up for membership to become a founding member and help shape HuffPost's next chapter
Join HuffPost