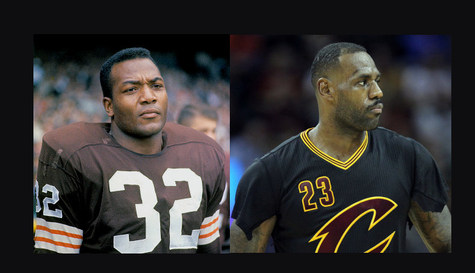 Prior to Sunday night's NBA championship for LeBron James and the Cavaliers, won in Oakland, the last time a team from Cleveland had won a major sports championship was when Jim Brown and the Browns won the NFL Championship in 1964. Of course the news from the Bay Area sent people in Cleveland into a frenzy of celebration.

In four weeks, there will be other loud sounds erupting in Cleveland, but they are unlikely to be so joyous. They, too, will in a sense be coming from the Bay Area, as an echo from 52 years ago.

The 2016 Republican National Convention in Cleveland promises to be reminiscent of the 1964 GOP National Convention, which was held in San Francisco, just across the bay from the arena in which the Cavs did something last done in 1964. In that year, extreme right wing backers of Sen. Barry Goldwater had seized control of the party. They hated the Republican "establishment." When New York Governor Nelson Rockefeller, a moderate, and therefore anathema to the Goldwater faithful, tried to speak in favor of a proposed platform amendment that would condemn extremist organizations, the crowd exploded into boos and jeers, preventing him from continuing to speak. The delegates shouted down the proposal to condemn such organizations as the Ku Klux Klan and the John Birch Society.

All sorts of racists were flocking to Goldwater's standard (in fact, Goldwater was not what they thought he was in this regard, but that's another story that had no effect on his backers in 1964). There were then, as now, better people in the Republican Party, but many of them shamefully closed ranks behind their extremist candidate, as many better Republicans are doing in 2016.

Senate Republican Leader Everett Dirksen went so far as to give a speech nominating Goldwater. In it, Sen. Dirksen, who a few weeks before had played a key role in passing the Civil Rights Act of 1964, cited Goldwater's opposition to the civil rights legislation an example of "that quality of moral courage which has won [Goldwater] the admiration of the citizens of this land."

How difficult is it to picture Paul Ryan doing something similar in Cleveland a month from now?

For his part, Goldwater infamously proclaimed in his acceptance speech, "I would remind you that extremism in the defense of liberty is no vice. And let me remind you also that moderation in the pursuit of justice is no virtue."

When the 1964 Republican nominee uttered these words, a journalist said "My, God, he's going to run as Barry Goldwater!"

Is there any question that the 2016 Republican nominee will run as Donald Trump? If he does, his end will be similar to that of Goldwater, who suffered the largest popular vote defeat in any contested presidential election in American history.

In that sense, the whole country can join with Cleveland in celebrating what happens there in a month.

Robert S. McElvaine teaches history at Millsaps College and is completing a book titled "The Times They Were a-Changin': 1964 - The Year 'The Sixties' Began."