Driven by a warmer-than-average June, the hottest ever July, and a warmer-than-average August, the summer of 2012 will go down in the history books as the third-warmest summer on record for the lower 48 states, the National Oceanic and Atmospheric Administration (NOAA) announced Monday. The nation’s second-warmest summer occurred just last year, and the only other summer that was warmer than the past two occurred during the Dust Bowl era of 1936. This summer was just two tenths of a degree cooler than the summer of 1936. 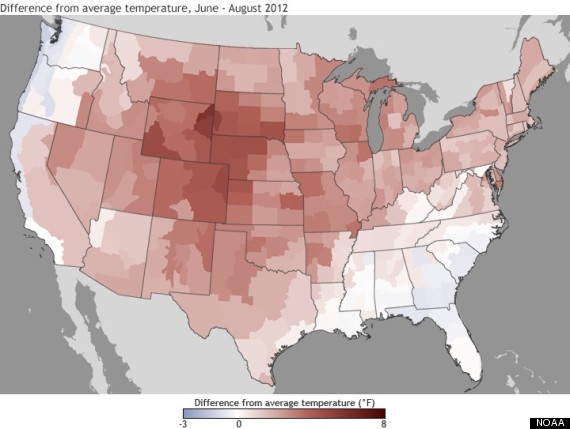 Temperature anomalies during the June through August period of 2012. Click on image for larger version. Credit: NOAA.

For the year-to-date, the U.S. had its warmest eight months of any year on record, and the past 12 months have been the warmest such period as well. During the eight-month period, 33 states were record warm and 12 states ranked in the top 10.

Sixteen states in the West, Plains, and Upper Midwest had summer temperatures among their 10 highest, as did seven Northeastern states from New Hampshire to Maryland. Colorado and Wyoming each had their record hottest summer. In Wyoming, the seasonal-average temperature was nearly 5°F above average.

The summer heatwaves this year were not quite as intense as the heat in 2011, but they affected more people. According to NOAA, more than 80 million people — about 10 million more than 2011 — experienced 100°F temperatures this summer. Climate change studies show that heat waves are becoming more common as manmade global warming continues. For the summer as a whole, warm-temperature records outnumbered cool-temperature records by a ratio of 3.5 to 1.

The extreme heat helped spread and intensify a massive drought that has shown no signs of abating in many areas, particularly across the West and High Plains. Nebraska and Wyoming saw their driest summers on record, and several other states in those regions saw one of their top 10 driest summers.

As of August 28, nearly 63 percent of the lower 48 states were experiencing moderate-to-exceptional drought conditions, and NOAA reported that the percentage of the nation experiencing the most intense drought doubled from 3 to 6 percent between July and August. The drought has led to a record wildfire season so far, with 3.6 million acres burned during August alone, mainly across the West. This was about twice the August average and the most for the month in the past 12 years. Interestingly, the number of fires was down this August, but the fires that did burn were larger than normal. 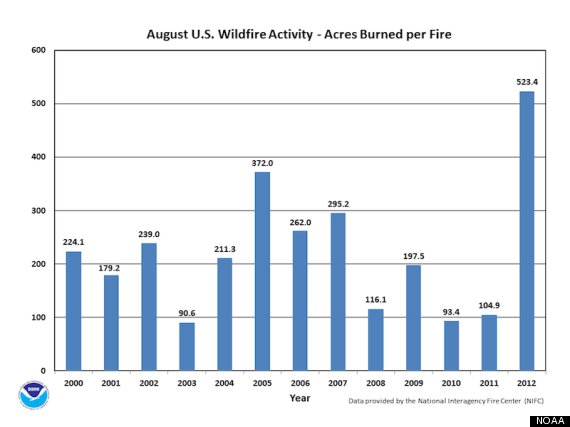 Jake Crouch, a climate analyst at NOAA's National Climatic Data Center in Asheville, N.C., said cool water temperatures in the tropical Pacific Ocean associated with a La Niña event contributed to the hot and dry conditions in many areas this summer. “La Niña in spring kind of helped lay the groundwork for what was to come during the summer period,” Crouch said.

Crouch noted that the U.S. has had 15 straight months with above-average temperatures, which had never occurred since instrument records began in 1895. Also, summer was the third straight season to rank among the top five warmest, Crouch said, which also had never previously occurred. “All of this fits into the longer-term warming trend,” he said.

Records that go back to the beginning of the 20th century show that this year’s drought was exceeded only by events during the 1930s Dust Bowl era, as well as the major droughts of the 1950s.

Nationally though, the summer was only the 18th driest on record for the contiguous U.S., which reflected above-average rainfall across the West Coast, Gulf Coast, and New England. Florida, for example, had its wettest summer on record. Apalachicola, Fla., had 39.62 inches of rain, which was nearly 20 inches above average for the June-through-August period. 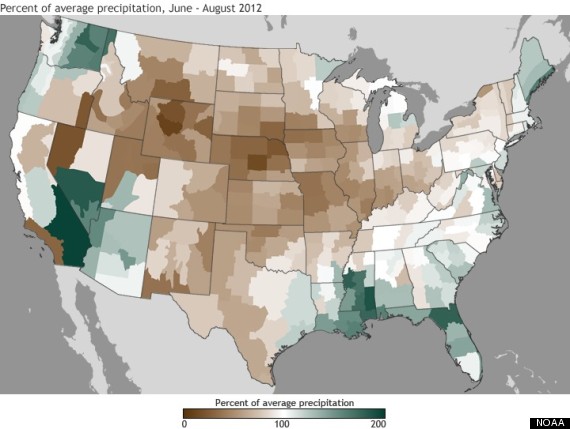 Precipitation percentage of normal during summer 2012, showing the extent of the drought. Click on image for larger version. Credit: NOAA.

During August, the core of the heat and dryness shifted to the West after searing the Midwest and Plains states during June and July. Nevada tied August 1934 for its warmest August on record. Six additional Western states had a top 10 warmest August. The Northeast was also warmer than average during August.

Due to the drought and widespread temperature extremes, the U.S. Climate Extremes Index, which keeps tabs on the highest and lowest 10 percent of extremes in several weather and climate categories, was one and a half times its average value for the summer season. 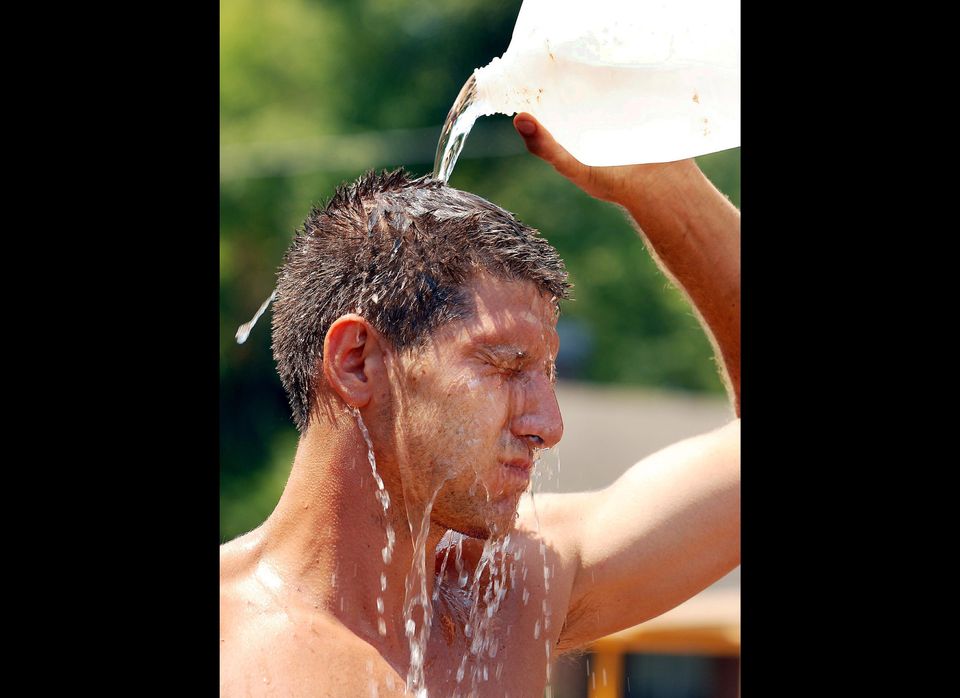