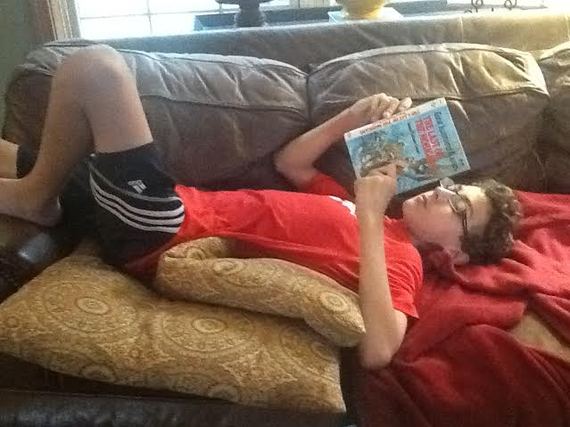 The first thing I want to say is I would rank these but then I would run out of numbers:

She puts me in my room for prolonged amounts of time. By my standards. About something that I don't think is that bad.

She won't let me watch R movies and they're summer blockbusters.

She makes me do what she wants.

She doesn't make my older brothers play with me.

I can't do anything with friends.

I can't do any social media.

I can't have a phone.

I can only do half an hour of video games a day. And THEN she sits next to me to make sure they're good games.

I can only watch shows for an hour a day.

I can't call people whenever I want.

She makes me go for family walks.

She used to make me go for family bike rides until I put my foot down last year. She tried again Sunday.

She barely just got me a headset to play video games with.

She signs me up for swimming lessons in the mornings when it's the coldest.

She gets mad when I say if she thinks swimming is so important then why isn't she the one taking the lessons.

She won't let me hang out with girls.

She won't let me hang around downtown or in movie theatres.

She has me at a $20 spending limit in stores.

She won't let me just do "nothing."

She takes me on "surprise" field trips.

She buys me books that are "classic" that I have to read.

She makes me take a shower.

She makes me use a pillow or something between my body and the iPad so I don't get radiation. Especially over my "reproductive organs."

She makes me tell her my one plan for the day.

She calls places to see who I'm going to be with when I say I'm going somewhere with somebody.

I can never say "somebody" when she asks me who I'm going with.

I can never say "somewhere" when she asks me where I'm going.

I can never stay up after midnight even though I only have swimming the next day. (Which I don't want to go to anyway)

Even though it's vacation I still have to do errands and chores.

Even though it's vacation I still have to change clothes and can't wear the same underwear after I take a shower.

Even though it's vacation and we're not in school seeing people I still have to brush my teeth and floss even if no one sees me in the mornings except her.

Even though it's vacation she won't cancel my dentist appointments.

She makes me write her blog posts.