Imagine being able to lease a 3D printer to build your entire house.

The technology, called Contour Crafting, is already here and can build a 2,500-square-foot home in 20 hours.

The massive robot printer was invented by University of Southern California professor Behrokh Khoshnevis, who says that the technology is so versatile that it can be used to build homes in slums or human habitats on Mars.

The technology is ideal for the world's slums and areas destroyed by natural disasters, claims Khoshnevis, because the robot's construction is cheaper, stronger, faster, safer and more eco-friendly than manual construction.

Khoshnevis also says NASA is supportive of using the technology to build lunar habitats, laboratories and roads on the Moon or Mars that could eventually house human life. NASA did not immediately respond to HuffPost's request for comment.

He points out that construction is far behind manufacturing when it comes to automation.

“If you look around yourself, pretty much everything is made automatically today -- your shoes, your clothes, home appliances, your car," he said during a TED talk. "The only thing that is still built by hand are these buildings."

Construction as we know it today is wasteful, costly and often over budget, he said. It is more dangerous for workers than mining and agriculture, resulting in 10,000 deaths a year, according to Khoshnevis. He says Contour Crafting offers construction with less waste, noise, dust or harmful emissions.

"They don’t have to look like tract houses because all you have to do is change a computer program," he said during the TED talk. "The walls do not have to be linear. They can use any kind of curve. Therefore, you can really execute very exotic beautiful architectural features without incurring extra cost."

This is how Contour Crafting would work, according to the video above: “On a cleared and leveled site, workers would lay down two rails a few feet further apart than the eventual building's width and a computer-controlled contour crafter would take over from there," Brad Lemley from Discover Magazine explained to MSNBC.

"A gantry-type crane with a hanging nozzle and a components-placing arm would travel along the rails," he said. "The nozzle would spit out concrete in layers to create hollow walls, and then fill in the walls with additional concrete… humans would hang doors and insert windows.”

The robot can also tile the floors, install plumbing, install electrical wiring and even paint or apply wallpaper.

Khoshnevis disputes concerns about potential job losses from such technology. In fact, he says it will create new jobs that are safer and that will allow women and older workers to participate more in the construction industry.

Khoshnevis is planning to establish a company to commercialize the technology and hopefully make it available for purchase in a few years, he told the USC student newspaper Daily Trojan.

Ultimately, Khoshnevis thinks that Contour Crafting will replace construction as we know it, reduce costs and make construction accessible to anyone.

"Imagine a Contour Crafting machine for lease at you local Home Depot," the researcher's site reads.

This 3D Printer, Capable Of Building A House In A Day, Could Change Construction Forever
11 Things Built By 3D Printers 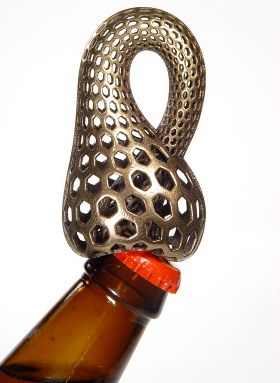