No other food blogger in LA talks about doughnuts more than Cathy Chaplin. She founded GastronomyBlog.com in 2006, and while it's a well-known resource for Vietnamese cooking and eating -- Anthony Bourdain famously visited The Lunch Lady in Saigon after reading Chaplin's review -- the thoughtful food blogger cannot stop herself from discussing -- what else? -- but the bliss rendered from perfectly fried dough.

Every year, America celebrates National Doughnut Day on the first Friday in June, and for this fried ‘n’ forgiving holiday, Chaplin talks to us about her doughnut love and picks her favorite five in LA. (Story continues after slideshow.)

All photos courtesy of GastronomyBlog.com

When did you first fall in love with the doughnut? I’ve always had a soft spot for fried dough, but didn’t fall head over heels until a trip to Seattle a few years back. My passion was inspired by the folks at Top Pot Doughnuts and Frost Doughnuts. So far, the doughnut to beat is the bacon maple bar at Frost.

"Doughnut" or "Donut"? Doughnut because the batter is what it's all about.

How many doughnuts can you eat in one sitting? The most I’ve ever eaten in one sitting is four. Actually, it was more like a "running" than a sitting. It was back in college at the 4xDonut, the greatest foot race in all of the land. Four laps around the track paired with four Dunkin Donuts. Memories for a lifetime.

On a scale of one to 10, how excited and/or intrigued are you by the forthcoming Fonuts by Waylynn Lucas (the former pastry chef at The Bazaar)? Let’s say a solid 5.5. I’m stoked that someone in LA is finally stepping up to the plate and opening up a gourmet doughnut shop. However, I have my doubts about doughnuts that are steamed and baked. I can't even begin to explain how silly the concept of "healthy" doughnuts is. What’s wrong with deep-frying? It’s the way God intended doughnuts to be made! 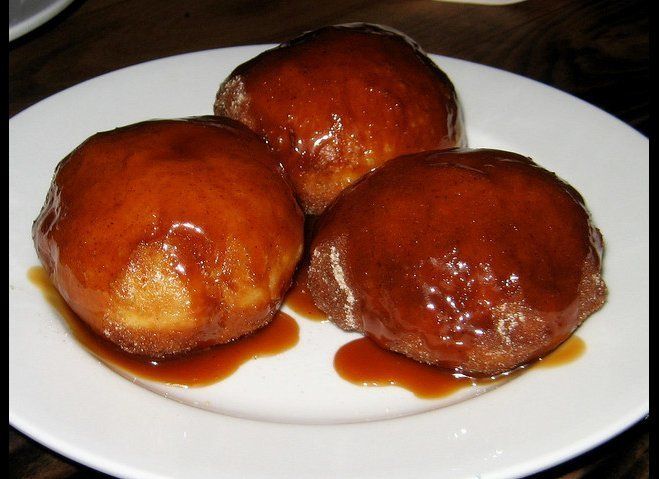 1 / 5
Joe's Doughnuts at Animal
The Gastronomer says: "The trio of poofed-out orbs are served hot from the fryer and drenched in a gooey caramel sauce. The doughnut's impossibly light texture, coupled with the sticky sweet sauce, is the most winning of combinations. Make these a menu mainstay, Vinny and Jon!" <em>Animal, 435 North Fairfax Avenue, at Oakwood Avenue (323-782-9225 or <a href="http://animalrestaurant.com" target="_hplink">animalrestaurant.com</a>)</em>