New research about how teens make friends was released last week. According to Pew Research Center's "Teens, Technology and Friendships," by Amanda Lenhart, "57 percent of teens have met a new friend online. Social media and online gameplay are the most common digital venues for meeting friends." 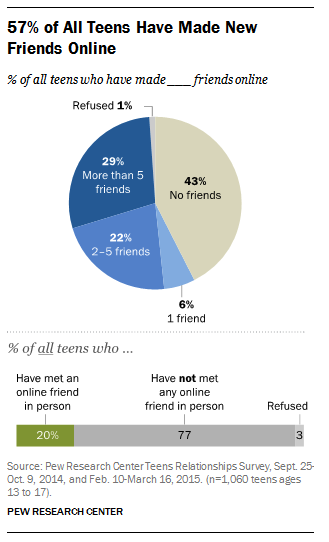 While it shouldn't be a surprise to parents that teens engage in the entirely normal behavior of "hanging out" with friends in the place where they spend the most time -- the digital world -- what should be a surprise is an apparent increase in new friendships starting out online. Just eight short years ago, in another Pew Research study titled "Teens, Privacy and Online Social Networks," Lenhart and her team found,

While teens today certainly still use social media to "stay in touch with friends they already know," the news that more that half are now meeting new friends online seems like a shift. Although most of these friendships, according to the report, stay in digital spaces; 20 percent of all teens have met an online friend in person, despite parental fears and warnings about "stranger-danger."

Of course there are countless advantages to meeting new friends online, it can expand a teen's world beyond the confines of a small town or a like-minded community, or help a shy teen forge meaningful and supportive relationships. In the Pew report, for example, a middle school boy is quoted regarding his positive experience meeting a new friend from another country,

"I met him -- [he's] from Africa or something. And then we started talking and I asked '[What] was it like over there?' I asked him if he lives, like, in like a little town or like in a big thing. And he said he lived like in a little town and it wasn't that big. ...And then he asked me, and I said I live in [large Midwestern city]. And then he said 'How is it there?' And I said 'It's good.'...I talked to him yesterday."

In very rare cases, there are dangers associated with teens meeting new people online. For example, predators have posed as teens in order to forge relationships, as in the case of a 13-year old boy who was targeted through social media by a man accused of being an online predator, or three teen girls from Colorado who were targeted and befriended via social media by extremist recruiters belonging to ISIS.

While events like these remain, thankfully, far from commonplace, it's wise to be aware and to discuss them with your teen. Think of it as suggesting they look both ways before crossing the street.

In this new and different world of friendship-making, parents need to readjust their parenting skills in order to help young people learn how to make new relationships that are safe and positive. First off, it's important to remember that kids haven't changed. The healthy urge to make new friends is the same as it has been forever, it's just that how it happens is shifting and much of that shift is due to us. We've placed technology in our kids' hands at increasingly younger ages, we've kept them indoors more than any other previous generation (even though we live in the safest society to date), and we've overloaded them with sports, homework, structured activities and more, with little time for anything else. It's no wonder they turn to tech to be normal teens.

Still it's our job to help them manage new friendships in a new world. So here are some tips:

Advertisement
According to researcher Mimi Ito and her team who write about youth practices in "
Hanging Out, Messing Around, and Geeking Out
," for young people the "underlying practices of sociability, learning, play and self-expression" are the same as they've been for hundreds of years, it's just that the playing field has changed.

It's time for parents to up their game.

Here Are Some Of The Best Bronzers For Deeper Skin Tones