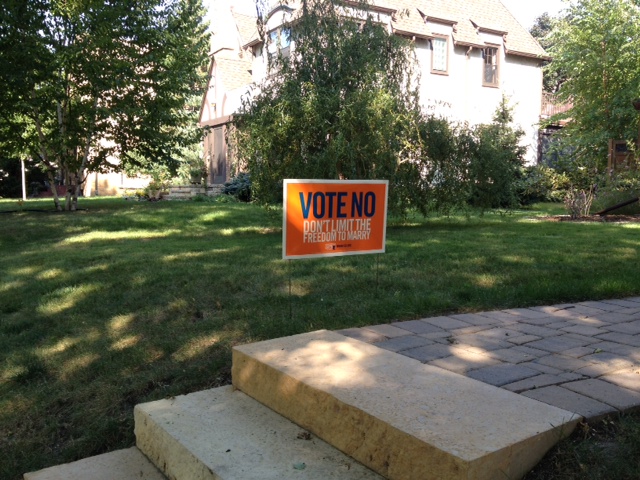 I've agreed to be the "Vote No: Don't Limit the Freedom to Marry" yard sign distributor for my neighborhood. I'm doing this because it makes me feel safer to see the signs when I'm driving around. It helps me know where allies live, close by. It helps me remember that I'm not alone.

I guess I should say I am hoping to be the yard sign distributor for my neighborhood! The MN United for All Families campaign actually doesn't want people like me to be doing things like this. Today I'm going to go see if cold cash changes their minds!

Unlike candidates' campaigns, where volunteers will usually show up and pitch signs for you if you just click "yes" on a website, MN United for All Families is charging $10 and asking for a three-hour volunteer commitment in order to procure a sign. They don't want people like me sliding over their leverage point as they ask for time. They are doing this, I'm told, because they really need volunteers, and people seem to think that wearing a T-shirt and putting on a lawn sign is "doing their part." Or, I'm reminded, "Lawn signs can't vote."

I get that. I already blogged about the lack of volunteers and what a huge problem that is, and about how frustrating it is for me when people I care about -- even LGBT people -- seem to feel absolutely no obligation to do anything to fight this amendment besides vote and maybe slap on a bumper sticker or button, even though all indicators are that we're going to lose this thing unless thousands more one-to-one conversations take place week after week.

So I get that people ideally should do more than put up a lawn sign. Still, I think, in this case, lawn signs really matter. In other states, violence and bullying have increased significantly during ballot measures such as ours. Within LGBT families, abuse and addiction and depression increase during these ballot measures. Seeing tangible signs of support may not win the election, but it could help to build a movement that will enable us to "lose forward," as marriage equality genius Evan Wolfson says.

A realtor told me that he was showing a house out in the suburbs of the Twin Cities, in Anoka, Minn. (That's Michele Bachmann's district, and the school district with the record numbers of LGBT suicides.) This realtor told me that in Anoka he saw dozens of lawn signs from the National Organization for Marriage. I am grateful that, so far, I don't see any of those on my block, though there is a car down the street with a bumper sticker with the words "One Man and One Woman." And it's in front of a house where I've enjoyed chatting with the folks a lot, so there you are...

Anyway, this realtor, a nice ally to us LGBT folks, was saying that he wouldn't consider moving to a neighborhood like that, but he wasn't sure what to say to his client. I, for my part, already know that I have some very homophobic neighbors, with or without lawn signs, but I didn't know that I have some good allies nearby, too. It makes me feel safer!

So, wish me luck. Today I attempt to procure lawn signs, and then to procure pledges to volunteer from the neighbors I share them with. (As well as their $10, which I will happily accept to reimburse me.)

Rev Meg Riley serves as a Unitarian Universalist minister. Love is her aspiration; she longs and works for a world of kindness and justice.