Four years ago, I began a professional journey that profoundly changed me. Having burned out after spending seven years as a commercial real estate lawyer, I decided to change careers and study stress, burnout and how people can build their own resilience reserves. I never in a million years thought that part of that journey would include working with drill sergeants, soldiers and their spouses in the U.S. Army.

I wanted to be part of the team working to train soldiers in resilience because of my grandpa. He was in the D-Day Normandy invasion and was forever changed by his experience fighting in WWII. Getting "help" wasn't what he chose to do after the war, and instead his demons got the better of him on many occasions. I wanted something different for other families.

Part of my training included learning how to speak Army, figuring out the rank structure, and understanding a vast alphabet of acronyms. It was all worth it because I learned so much from the soldiers with whom I worked. Here are just a few of the biggest lessons I learned:

Authenticity is cool. I started this work with my guard up. I vowed not to let people see who I really was or know the full extent of my story (the trips to the ER because of stress, the weekly panic attacks during my burnout and more), because if people knew who I really was, the perfect veneer I had spent years trying to build and maintain might shatter. Instead of connecting with the soldiers heart to heart, I connected with them through facts, figures, and knowledge -- I wasn't about to take the risk to expose the flaws.

But then the soldiers started to tell their stories, and I got to witness their "aha" moments. They talked about the mistakes they had made both personally and professionally, friends and loves lost, and regrets they had. That made me think, "If the toughest men and women on the planet could open up a little, maybe I could too." And then it all changed for me. Thanks to the soldiers and their spouses, I had the courage to finally step into the fullest version of my story. As a result, my mission became clearer, my writing became richer and my connections with others deeper. I learned that vulnerability is not weakness; rather, it is courage in its purest form.

Take good risks. I realized that seven years of practicing law caused me to play it safe in life. I got comfortable in my little corner of the world and stopped taking good risks. Being part of this training team required me to get outside of my comfort zone on a number of occasions. I traveled to the Middle East and rode a camel in the middle of the desert (I never imagined that this sentence would ever have come out of my mouth), acted out skits to illustrate teaching concepts, and danced in front of rooms full of soldiers (considering I dance like Elaine from Seinfeld, I nearly gave myself a panic attack the first time I had to do this -- no joke). When you push your boundaries and succeed, your brain says, "I can do more." Thanks to the push I got in this program, taking good risks has become a fundamental part of my life.

Have a battle buddy. Connection is a fundamental tenet of resilience. In the military, a battle buddy, or battle, is the person a soldier assists both in and out of combat. In the military, a soldier always has someone to count on for assistance, and I think it's a concept civilians should adopt. My battle, Lorrie, has helped me in countless ways both personally and professionally, and it's so comforting to know that this "bestie" exists in my life.

Don't sweat the small stuff. When you put your life on the line for a cause, as soldiers do on a daily basis, things like waiting in a long line at the grocery store become less of a big deal. When you get deployed multiple times in a few short years and miss family events and births of kids, a little traffic jam isn't so stressful. Getting the wrong order at Starbucks isn't the end of the world. I gained a new appreciation of what it means to sacrifice.

Humor is a survival strategy. When I first started this work, I was taken aback at how many soldiers cited "humor" or "laughing" as a resilience strategy. Given the intensity and seriousness of the situations they often encounter, using humor as a coping mechanism seemed misplaced to me, but I was wrong. Humor is often the very thing that gets them through the intensity and the seriousness. I try to find the funny in stress now.

Lead like a solider. One of my colleagues said that we should create a hotline for civilians to call a solider in times of adversity because they are that good at solving problems (she called it "Dial an NCO"). Whether it's creating a mobile hospital in the desert from scratch, securing a forward operating base, or organizing the mass exodus of 200+ people from the basement of the Sheraton in Philly during a fire drill (which actually happened), soldiers understand the core of what it means to be a good leader.

Connect with something bigger than yourself. For some soldiers this means God, for others, it's a sense of spirituality. For others still, their "something bigger" is their service in the military. The Army soldiers we train live and lead by a specific set of values: loyalty, duty, respect, selfless service, honor, integrity, and personal courage.

I helped teach resilience skills to thousands of soldiers and their spouses, and every time I said goodbye to a class, I got choked up because I saw my grandpa in every one of their faces. He would have been so proud of this work, and I thank these men and women for changing my life in the best possible way.

To learn more about Paula and her work, please visit her website at www.pauladavislaack.com 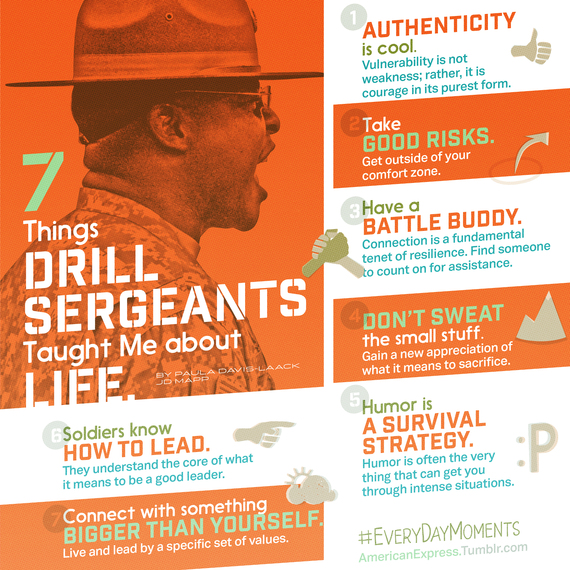