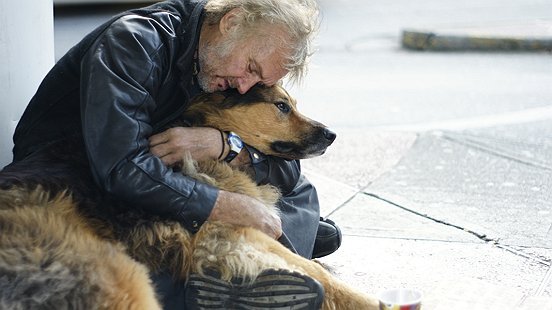 Photo courtesy of Dan Lee and Pets of the Homeless.

I was walking in the West Village in Manhattan last weekend and saw a sweet interaction between a homeless woman and her dog. The woman readjusted her posture on some cardboard; and her dog reacted, looking at her with an expression that said: "I'm checking in. Is there something we should be aware of now?" The woman looked back at the dog like he'd just awakened her from a daydream, then pet him on the head and leaned back against the wall.

The exchange touched me because I'd seen my old dog wearing that exact expression; and because it was obvious the woman and her dog looked out for each other.

"Homeless people shouldn't have dogs when they can't even take care of themselves. That's wrong," a friend said after I told her the story.

My friend's reaction surprised me. It also struck a raw, primal nerve. I was reminded of a statement I'd heard (more than once) that people "shouldn't have children" if they don't make a certain amount of money.

The latter argument is preposterous. Underlying it is the prejudicial implication that the people in question are all on welfare -- sapping money out of good taxpayer's pockets, and will be doing so for the rest of their lives. Millions of struggling families work hard to feed their children. If we took this argument to heart we'd be living in some kind of futuristic dystopian dictatorship where many of us, and many of our friends and family members would've never been born.

The case of the dogs is trickier. Dogs aren't born to us, they are found (or find us). Who's to say a homeless person has less rights to that dog?

1. Who are we to judge?
Finances don't indicate who a person is, what they are capable of, how much love they deserve or where it should come from. Poverty is not a character trait. A struggling person deserves the same intimate connections as everyone else.

More importantly, having money doesn't give us the right to make those decisions for others -- doesn't give us exclusive dominion over animals or children. When somebody makes that argument I want to tell them to get over themselves. Seriously.

2. This is the world that we live in.
In this strange world we often see as many people living on the streets as those walking it. Alleviating problems that cause homelessness is a good goal. However, if these scenes are so commonplace; we might also accept the fact that they mirror our own lives.

Homeless people we live alongside deserve to live (as we all do) free from judgment. They are out there in plain sight, but that doesn't mean they volunteered to be guests on a talk show; that we're allowed to be the audience, sheepishly shaking our heads and mouthing our disapproval to the cameras. 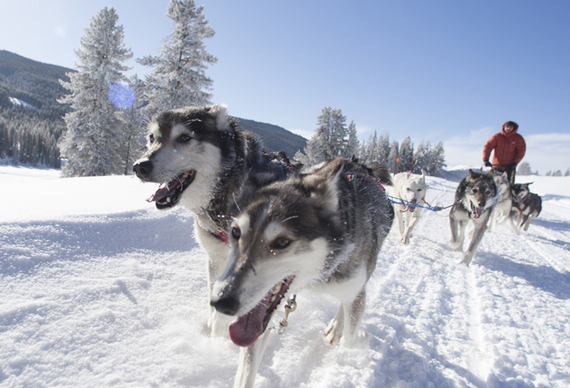 3. Dogs are hearty, resilient creatures who come to us when we need them.

I worked for one season as a sled dog mushing guide in Wyoming. Those tough dogs slept in houses made of huge, hollowed out, straw filled cable spools. Temperatures regularly dipped well below zero. The dogs were built for that weather. We often were surprised to see a few of them lounging on top of their houses on the coldest days.

Some retired sled dogs became house dogs. The house dogs were spoiled and sometimes refused to go outside. Still, when out in the yard, they were fine. Dogs are adaptable, and only as fragile as we make them out to be.

Homeless people's dogs are appropriately chosen. I am relatively certain most street people's dogs are not the miniature poodles that wealthy women on the Upper East Side dress in sweaters and push around in baby carriages. They are mostly mutts of hearty winter faring stock, giant dogs that offer the extra measure of whoop ass protection people might need on the streets.

4. People who love their dogs, find ways to care for them.
While it is true that homeless people may struggle to find food; in this country, people don't generally die exclusively from diseases related to starvation. I personally went hungry a day or two in my life so my dog could eat (I had housing at the time). I assume homeless people do the same, and are as tenacious about finding food for their dogs as they are for themselves. Likewise, they probably know ways to stay warm, and find good spots to snuggle.

When you love another being, you find a way to take care of them. You just do.

5. The need for companionship is just as important as the need for food or shelter

Taking care of others, reinforces our purpose for living, People may not die from loneliness, but in some ways, they can cease to exist if they truly cut themselves off from the world.

A person who has a dog to take care of and love is more apt to be healthier, to feel more a part of the world. Healthier people do not tend to be as much of a "threat" to other people.

6. Housing doesn't mean that a person is good or bad.
It is possible that there are some people who are homeless and have mental illness that may cause them to neglect or abuse their dogs. There are plenty of people living in houses who do the same.

7. Homeless dogs are working dogs.
American homeless people deserve pets, because they are part of our culture. At the same time, those dogs earn their keep as guard dogs, therapy dogs and traveling companions.

8. Instead of criticizing, help.
If you are worried about a dog you see on the street, give his owner some dog food, or a couple of hamburgers. There are also organizations set up to help street dogs get vaccinations and food. One of these organizations is Pets of the Homeless http://www.petsofthehomeless.org/