Writer Nina Hahn was once on a plane that was struck by lightning mid-flight -- but instead of letting that incident curtail her ability to fly, she regained control over her fear of flying. Here's how. 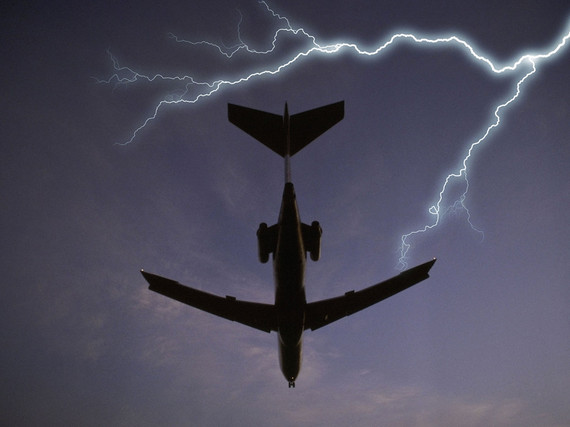 We were still ascending when it happened. It was February of 2000 and my then-boyfriend, now-husband, Sean, and I were on a late flight from Chicago O'Hare to Sacramento for a Lake Tahoe ski trip. Cold rain streaked across the windows as the plane roared through dark clouds. Back then, I was unfazed by a plane that was rocking and rolling.

I can't remember the order in which things happened, but there was a tremendous crackling noise, a burst of light, and what felt like the snap of a whip across the plane. People screamed. We stared at each other wide-eyed. What the hell just happened?

Rows ahead of us, some passengers yelled something about smoke. The flight attendants scurried up the aisle. The plane continued to climb, seemingly unperturbed. No fire emerged. The captain got on the intercom. "I've been flying for 30 years and have heard about lightning striking planes, but never had it happen to a plane I was flying."

Oh my God. Did he really just say that?

My heart was pounding full-throttle, a buzz so loud I almost did not hear the captain when he returned to announce the plane was still safe to fly. And so, we continued on for the remainder of the world's longest four-hour flight.

That same year saw me on several other turbulent flights, which collectively added up to a new, gut-wrenching fear of flying. I won't say that I've completely overcome my fear, but I have come a million miles in terms of managing it thanks to a number of coping techniques.

I am not a doctor, a psychologist, or a pilot -- just an avid traveler determined not to be curtailed by being afraid. I've read countless stories and statistics about why you should not be afraid, but in my book, it's far more powerful to hear from someone who has been in your shoes. That's me, friend, and this is how I continue to kick my fear of flying.

My fear was a visceral, physical reaction that could not be reasoned with, so for the first several years, I prioritized simply managing my anxiety. Alcohol was unpredictable and Valium only made me tired, but when my doctor prescribed Xanax, it worked like a charm, taking a massive edge off. Long-term solutions that continue to help include running or yoga on the day of a flight, avoiding caffeine, breathing techniques (such as Dr. Andrew Weil's 4-7-8 method), and listening to music with low beats per minute. (R. Kelly's "Ignition" has played in my head for years.) Talk to your doctor about the best option for you.

2. DON'T GIVE YOUR WORDS POWER.

I used to talk about my fear of flying all the time, especially before an upcoming flight. Then it dawned on me that I was giving my words power. Mary Jackson Lee, a Chicago-based cognitive behavioral therapist, says that "fear is always bolstered by anticipation and avoidance." Lee says that anticipation is neutral until we make it something positive or negative: "The charge comes from what you assign it in your head," she explains. So rather than telling myself I was afraid, I created a new story that had me playing a nonchalant flier.

I forced myself onto a lot of plane rides, mostly because of my work. If you have the luxury of flying often, look at each flight as an opportunity to continually confront your fears. Keep in mind that long stretches of time between flights might make you more anxious.

Throw yourself into something you love, or something completely absorbing. For me, it's doing my work and I've gotten to where I actually love popping open my laptop to write in the air (sometimes forgetting I am on a plane!). Other effective distractions include my children, Soduku; listening to the Serial podcast; or watching the latest episode of Game of Thrones.

5. FEEL FREE TO MOVE ABOUT THE CABIN.

Close quarters can heighten anxiety, so I always try to nab an aisle seat and I make a point of getting up to use the bathroom or taking a quick walk. Karen Nichols, a Delta Air Lines flight attendant for 19 years, also recommends talking to available flight personnel if you're struggling. "I like to put people at ease by simply sharing my own flying history," says Nichols. "I fly on average over half a million miles a year, and to date have never had to deal with more than a minor mechanical or medical issue."

It can be hard to accept that not only can you not see what's in front of you -- you are 100 percent not in control when you are on a plane. On the flip side, it's a lot easier to relinquish control when you understand the view from the cockpit. Ask your flight attendant if you can meet and talk to the pilot before your flight, or read a tell-all book like Patrick Smith's Cockpit Confidential, or taking flying lessons. I once had the chance to ride in the jump seat of a charter flight in Africa, which let me see what pilots get to see. It was awesome.

Instead of thinking about plane disasters and what can go wrong, I like to focus on amazing landings and stories where a skilled human saved the day. My favorites include Captain Chesley B. "Sully" Sullenberger's Hudson River landing and a JetBlue pilot's expert landing with a malfunctioning front wheel.

8. KEEP IN MIND WHAT'S ON THE OTHER SIDE.

Most times, we are on a plane to get somewhere amazing. It helps to picture myself there and to anticipate all of the great things I'll get to do once I arrive -- starting with a cup of coffee as soon as I step off the plane.

More:
anxietyfear of flyingplanesairplanes travel
Newsletter Sign Up
An essential daily guide to achieving the good life
Subscribe to our lifestyle email.
Successfully Subscribed!
Realness delivered to your inbox